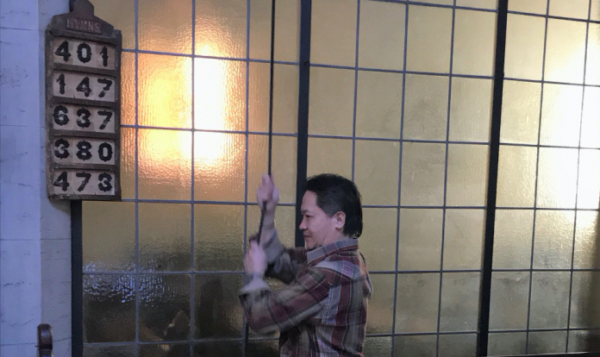 [Anglican Journal] Every day at noon, Edgardo Sasuman, sacristan for St. James Episcopal Church in Florence, Italy, rings the church’s bells. It’s a call of solidarity and love from a church that is on the front lines of the coronavirus crisis.

St. James has managed to offer online services on Sundays and Wednesdays and hopes to start video Bible study, as well as keeping in touch with vulnerable parishioners. That’s not an easy task in a country where people are required to stay in their homes, a lockdown that became even tighter on March 22.

“I am being more intentional in my communication to people back in the United States to encourage them, but also to urge them to embrace the best practices of social distancing and hygiene,” says the Rev. Andrew Cooley, interim rector at St. James, when asked how the outbreak of COVID-19 has affected his work. “I am speaking to them from their future of 10 to 14 days. I also believe that the churches in Europe might be better able to deal with the imposed isolation, as we are generally more isolated from each other and have developed better dependence on virtual connections.”

Even before Anglican and Episcopal churches in North America began having to respond to the coronavirus, the 21 churches and missions of the Convocation of Episcopal Churches in Europe—part of the U.S.-based Episcopal Church—were dealing with shuttered doors, widespread lockdowns and limited public transportation. Many have taken God’s message to parishioners in online and other ways.

“We are not without the church—not ever,” the Rt. Rev. Mark Edington, bishop-in-charge of the convocation, wrote to parishioners in Europe. “We have always said, and it is no less true for our saying it, that the church is the people of God, and not the house in which they dwell; and so we are still the church, even if we cannot be in the church.”

In that vein, Edington compiled a Convocation Companion e-book of prayers and devotions based on the Daily Office readings from March 22 to April 17, 2020, with contributions from lay and clergy leaders across the continent. It’s called Prayers for Days of Isolation.

In Germany, even before the government banned religious services and other gatherings, the Anglican/Episcopal Church of St. Augustine of Canterbury in Wiesbaden suspended services on March 15. It was following the guidelines of the Old Catholic Church and some Protestant regions and Catholic dioceses. The Sunday service is broadcast on Facebook, YouTube and the church’s website; other weekday services and Bible study are available through Zoom.

“One of the many blessings to come out of this crisis. I was so glad to receive the service,” one parishioner wrote on the church’s Facebook page.

In addition, the church has put together a phone list of people in the vulnerable age group and those living alone that clergy and vestry will contact by phone at least one or two times a week. And volunteers are manning an “errand ministry,” to help those who feel unable to leave their homes with things like shopping and post office runs, said the Rev. Christopher Easthill, rector of St. Augustine’s and president of the Convocation’s Council of Advice. He assures the services with the Rev. Steve McPeek and lay leaders.

Canceling live services was a difficult decision, Easthill told parishioners. But it needed to be done in the context of responsibility for one another.

“More than ever at this time let us remember and be strengthened by the three Christian virtues: Faith — trust in a God who is with us especially in crises; Hope — that this will soon be contained and in the resurrection promise; Charity — showing active love for one another, sure in the knowledge of God’s love for us,” he said in a message to parishioners.

At the American Cathedral of the Holy Trinity in Paris, the Very Rev. Lucinda Laird, dean, and the Rev. Linda Grenz, an interim assistant, both resident in the cathedral complex, are holding the fort. France is in near-total lockdown, so few others can enter the building. With Grenz’s husband, Delbert Glover, as lay reader and youth coordinator Cian Grourke as cameraman, they are holding livestreamed Sunday services and morning prayer on weekdays.

Evening Compline services are available on the cathedral’s YouTube Channel and via the website. Bible study is also being organized, as is pastoral care.

“We will make sure we are there for each other,” Laird said in a video message on the Facebook page. “The more important thing is to remind you that we are Christians…. Now is the time to be what we are called to be, to shine forth and help others find their faith.”

— Anne Swardson, a former journalist for The Washington Post and Bloomberg News, is a parishioner at the American Cathedral in Paris and a former president of the Council of Advice of the Convocation of Episcopal Churches in Europe.