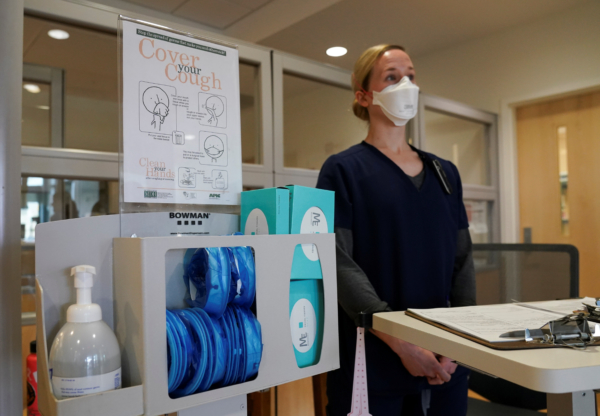 [Episcopal News Service] Hospitals and nursing homes are working intensely to slow the spread of the COVID-19 pandemic, with doctors and nurses struggling to keep health care systems running amid a lack of equipment, space, tests and consistent policies. Through it all, health care chaplains are doing what they do best – consoling and comforting patients and staff alike – even as they risk becoming infected themselves.

The Rev. Janice Hicks, a vocational deacon, works in a facility that exclusively serves people at the higher end of the risk spectrum for COVID-19. She is an Episcopal chaplain on staff at Asbury Methodist Village in Gaithersburg, Maryland, a retirement and assisted living complex that is home to about 1,400 seniors in various states of health and ability. If the virus gets into the community, it could be disastrous, as it was for the Life Care Center nursing home in Kirkland, Washington, where 29 people had died of COVID-19 as of March 16 and most of the remaining residents have tested positive.

Hicks was not aware of any confirmed COVID-19 cases at Asbury, although in the absence of widespread testing, health experts say the virus is rapidly spreading undetected. For now, the most apparent challenges are social and emotional. Communal meals have been canceled, along with all group events, and visitor access is extremely restricted, eliminating most opportunities for socializing, she said.

“There is obviously anxiety on the part of the seniors,” Hicks said. “The ones that are most affected are the ones who are very social and used to being in groups because we no longer have any activities scheduled. … They’re lonely and discouraged. I’ve seen tears.”

In the assisted living and nursing sections of the facility, many patients have dementia, and having their routines interrupted can upset them and make it harder to care for them, Hicks said.

“That’s especially disruptive for them,” she told ENS.

Hicks and other staff members are getting training in COVID-19-related procedures “almost daily,” she said. Part of that is learning how to do other people’s jobs in case they get sick or have to stay home. So she now doubles as a food server – bringing meals to residents’ rooms – in addition to her role as chaplain, which gives her a chance to say grace with them. She’s also broadcasting worship services from the complex’s chapel over its TV network and helping residents FaceTime with their families.

“I do worry that, if we were to get the illness on campus, we’re going to lose some people,” she said. “I really worry about that. I worry about people going to the hospital, becoming isolated, not receiving any visitors and dying alone. Most of the hospitals around here are not allowing chaplains in, not even at the end of life.”

Staff are screened daily when they enter the facility, Hicks said; their temperature is taken and they are asked if they are experiencing any symptoms associated with the virus. Hicks expects that if COVID-19 shows up in the facility, she will have to wear protective gear and eventually may not be allowed in. But until that happens, she is determined to do what she can.

“I became a chaplain late in life; it was a real call for me, after taking care of my mom for so many years and finding that I really liked the work,” said Hicks, who has been a chaplain for about a year. “I’ll go as long as they allow us to.”

Some chaplains have already been sidelined because of illness. The Rev. James Ransom has been a chaplain at the Dartmouth-Hitchcock Medical Center in Lebanon, New Hampshire, for four years. The other Episcopal chaplain who works with him at the hospital is unable to work because her daughter is in quarantine for COVID-19, and Ransom himself has been out sick since early March, so the Episcopal chaplaincy program is shutting down for two weeks – though the hospital has other chaplains on staff.

The hospital had the first documented case of COVID-19 in New Hampshire when an employee was confirmed to have the virus on March 2. At age 76, Ransom is at high risk for serious complications if he were to contract it.

“I don’t have any greater anxieties that anybody else,” Ransom told ENS. “No one wants to get the virus, but if you do, we’ll just have to cope our best. … All the health care workers, including the chaplains, are being very brave. It’s their job to be there.”

The Rev. Susan Roberts, president of the Assembly of Episcopal Healthcare Chaplains and director of spiritual wellness at St. Luke’s Hospital in Kansas City, Missouri, is trying to prepare her staff for whatever comes next. She supervises four staff chaplains and five clinical pastoral education residents, who are training to be chaplains, clergy or other spiritual care providers.

As an administrator, she is planning for the possibility of a deluge of patients overwhelming the health care system, which has led to rationing care in places like Italy.

With no confirmed COVID-19 patients in the hospital yet, Roberts’ staff is focusing on supporting the rest of the hospital’s workers, who are “anxious and tired,” she said.

“I’ve invited and encouraged my staff to do creative things like, you know, make some art and put it at the nurses’ station or to just drop some notes or messages to nurses, just checking in constantly, being really present to the staff as they are caring for people.”

When Roberts spoke to ENS, her hospital had just stopped allowing visitors in almost all circumstances, so patients are more in need of personal interaction than ever – but that’s increasingly happening through a technological barrier. If a patient who is suspected of having COVID-19 requests a chaplain, Roberts has told her staff to call the patient’s room and talk on the phone, not entering the room unless there’s “absolutely some need,” and wearing protective equipment if they do.

But even with protective measures, there is still so much health care workers don’t know about this pandemic, and chaplains must balance their responsibility to their patients and their own safety.