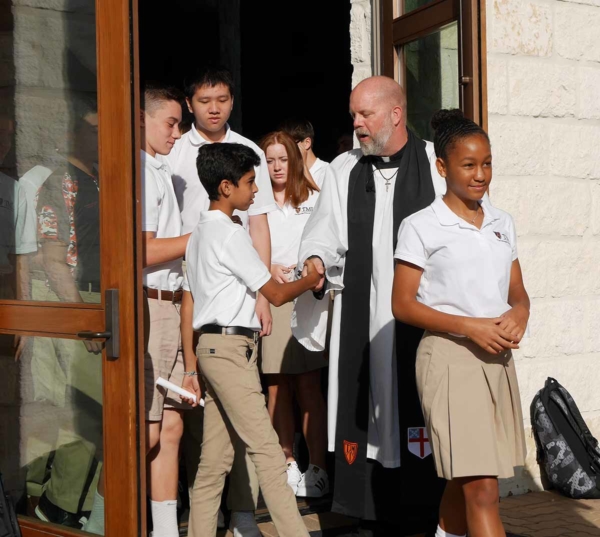 The Rev. Nate Bostian, head chaplain at TMI Episcopal in San Antonio, Texas, greets students. The school extended its spring break by a week to allow staff to prepare for distance learning as the coronavirus spreads throughout the United States. Photo courtesy of TMI Episcopal

[Episcopal News Service] When COVID-19 hit Portland, Oregon, things happened “really fast,” said Mo Copeland, head of school at Oregon Episcopal School, a K-12 school of some 890 students. The high school program accounts for 320 students, 60 of whom board at the school. The school’s leaders had already been keeping tabs on school closures in Seattle, Washington, 175 miles to the north. On March 11, when Oregon’s governor, Kate Brown, banned assemblies of 250 people or more, “that shut us down immediately,” Copeland said. The school quickly assessed how best to configure online learning, and if boarders should stay on-site (they ultimately left).

A little more than a week later, the Oregon school’s story is a familiar one. Episcopal schools have been no exception to this pandemic trend, said Ann Mellow, associate director of the National Association of Episcopal Schools. NAES supports and advocates for nearly 1,200 schools and programs nationwide.

At this point, “I would say many, many of our schools are closed,” Mellow said. NAES member schools don’t report to the organization, so it’s unclear exactly how many Episcopal schools had closed as of mid-March. Nonetheless, “our schools have been out in front of this,” she said. “Many are already instructing online,” including Oregon Episcopal School.

An invitation to families

As schools transition to distance learning and more people telecommute, families are living with deep-seated uncertainty and worry as they figure out how to share the same space all day together. The coronavirus pandemic is new, it’s scary, and there’s no great, granular model for how to adapt to such a constricted life.

The good news is that parents already have many tools to help them, and their children, stay centered. “Faith practices, routines, [and] rituals that we engage in will provide a sense of assurance and comfort for people, reduce their anxiety,” said the Rev. Jenifer Gamber, co-author of “Common Prayer for Children and Families” and chaplain at St. Patrick’s Episcopal Day School in Washington, D.C. Gamber sees this time as “an invitation to draw near” as families. 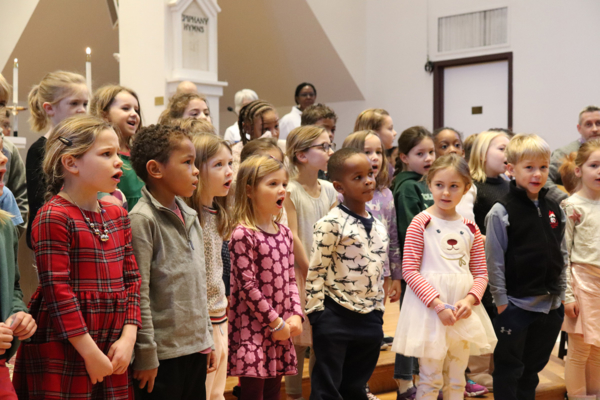 Pictured here are students at St. Patrick’s Episcopal Day School in Washington, D.C. The school is closed until April 13 at the earliest, due to the COVID-19 outbreak. The school’s remote learning plan has been put into effect. Photo courtesy of Jenifer Gamber

As families do so, these 10 ideas and practices will cultivate calm and hope during uncertain times.

Have caring conversations and tell stories

Gamber suggests creating a family altar at home, where you can light a candle and tell family stories, read the Bible, read picture books, or look at family photos with your children. She also encourages having caring conversations, in which parents ask their kids about their feelings without judgment, and without rushing them to a resolution.

“We cannot have hope without also being able to name the pain,” she said. Wendy Claire Barrie, author of “Faith at Home,” frames it this way: “We comfort them, we assure them, we’re with them. We make sure that they know that it’s okay to feel whatever they’re feeling. That goes for us, too,” she said, cautioning parents not to project their own feelings onto their children.

Discounted Godly Play bundle, “Stories of God at Home” and DIY kits of the Good Shepherd and Faces of Easter

During this time without in-person church, prayer is a simple practice that everyone can try, even those “for whom prayer at home doesn’t come easily,” Barrie said. “It’s also a time to get creative with prayer.” Anything that can be done with intention, such as taking a walk, is an opportunity to pray.

Miriam McKenney, development director for Forward Movement and a writer for Grow Christians, suggests that people pray spontaneously if they’re so moved. “If it feels awkward in the beginning, God is fine with that,” she said.

For his part, the Rev. Nate Bostian, head chaplain at TMI Episcopal, a day and boarding school in San Antonio, Texas, recommends setting up regular times for prayer alone and as a family. The Book of Common Prayer is available, as is “Common Prayer for Children and Families.”

Whatever approach feels right, “our prayer life is only going to get deeper as we continue on,” McKenney said.

Resources:
Free PDF of the Book of Common Prayer

Prayers and Thanksgivings from Forward Movement

“Common Prayer for Children and Families” by Jenifer Gamber and Timothy J.S. Seamans

McKenney notes the power of writing things down and having them in plain sight. Recently, she wrote Psalm 31 on a 3×5 card, “just to have it on me,” and also wrote it in a note on her computer. The passage “puts me in a spirit to talk to my children more calmly,” she said. McKenney also uses the Way of Love’s seven spiritual practices daily. “It’s hard,” she said. “The point is, we keep trying.” She suggests writing one practice on your home whiteboard each day, such as “turn” or “bless,” to keep the ideas alive.

Resource:
The Way of Love

Connect with your teens

Right now, “the hardest thing for teenagers is that they’re not allowed to be together,” notes Barrie, whose son is 17. Understanding where older kids find God and allowing them to explore those interests will provide comfort and foster connection. For Barrie, that means having her son, who finds God in music, create a playlist of songs. “And it’s not necessarily the music that I’d choose,” she said, adding that watching movies and TV shows together can bring up theological and existential questions in a more approachable way.

Drawing on her work as a youth ministries coordinator as well as a parent, McKenney notes the importance of humor and a light-hearted approach when dealing with adolescents.

“I just find when they feel they have permission to be themselves, they are more open to the spirit,” she said.

If you can get outside during this time of isolation and anxiety, that’s critical. “It’s really good for our spirits to be in touch with nature,” Barrie said. Get outside at least once a day if you can, Gamber said, marvel at nature, and let your younger kids play.

As much as possible, shield your children from the constant drumbeat of news via radio, television, online news sources and phone updates.

Be clear about your theology

Choose stories that convey the theological messages you want your children to absorb. Listening to kids is important, “but we’re also clear about where we’re coming from theologically; that God does not cause people to get sick,” Barrie said. “That God does not pick and choose who lives and dies. That God is with us in all times, and especially in our fear and in our anxiety, God is there too.” Parents, she emphasized, are their kids’ first, and most influential, religious teachers.

Stay connected to your wider community

Even schools that aren’t yet online may be in the weeks ahead. Chaplains are figuring out how best to re-create that experience virtually. Churches are streaming services, and youth groups are meeting via Zoom. Use those resources, and allow your kids to do the same. It’s important for kids to remember that they’re part of a larger community of care, Gamber said. At the same time, think about how to help people who don’t live with you. When families have victories with spiritual practices, McKenney encourages them to share those on social media.

Resources:
Connected in Common, home-based worship and community from the Episcopal Church of Colorado

Tucked In: Bedtime Stories and Prayers with Episcopalians and Others, Facebook page

Establish a routine and pay attention

The rhythm of prayer and other spiritual practices can provide a foundation for a new routine. Bostian also encourages “a structure for the new normalcy,” with expected times for sleep, school and exercise. In addition to checking in emotionally, he suggests staying alert to nonverbal signs that your child or partner might be struggling, such as changes in hygiene or sleep.

Remember: It won’t be perfect

Whether it’s trying to pray at home, to withhold judgment, to get outside, or to create a sustaining routine, cut yourself, and those you live with, a break.

“I think we are all given a lot of grace by God right now to try and to make mistakes, and to know that we can turn again and try it again. As long as we are on this path together, following Jesus, it’s hard to mess this up as far as God sees it,” said McKenney. “We can see it as a mess-up, but God doesn’t see it that way.”

Barrie underscores this point, cautioning against perfectionism. She reminds parents that for children, “home is already holy.”