[Episcopal News Service] The West Coast was an early flashpoint in the spread of COVID-19 in the United States. “It sort of came on fast here in Seattle,” said the Rev. Doyt Conn Jr., rector of Epiphany Episcopal Church. As of March 17, at least 56 people had died in Seattle and King County, Washington, more than a third of all U.S. coronavirus deaths.

On the other side of the country, the Diocese of Virginia on March 11 canceled in-person worship services at all 179 of its congregations in response to the coronavirus outbreak. The Rev. Noelle York-Simmons, rector of Christ Church in Alexandria, said clergy and lay leaders everywhere have been forced to rethink what it means to be church, without any sense for how long this upheaval will last.

“It’s no longer a sprint. It’s no longer, how do we hold on for a couple weeks?” York-Simmons said, but rather, “how are we going to be doing this for the long haul?”

And at St. Martin’s Episcopal Church in Houston, Texas, the largest congregation in The Episcopal Church with more than 9,000 baptized members, Episcopalians are dealing with the sudden shock to normal parish life but also thinking about the crucial role of the church in times of crisis. “It’s a tremendous opportunity to point people to the promises of our faith,” said the Rev. Russell Levenson Jr., the rector at St. Martin’s.

Conn, York-Simmons and Levenson described their congregations’ experiences on March 18 during an hourlong webinar about church responses to the coronavirus pandemic. The webinar was organized by the Consortium of Endowed Episcopal Parishes, or CEEP, and moderated by the Rev. Matt Heyd, rector of the Church of the Heavenly Rest in New York City, who also was joined by Eleanor Bergquist, a public health expert based in St. Louis, Missouri. 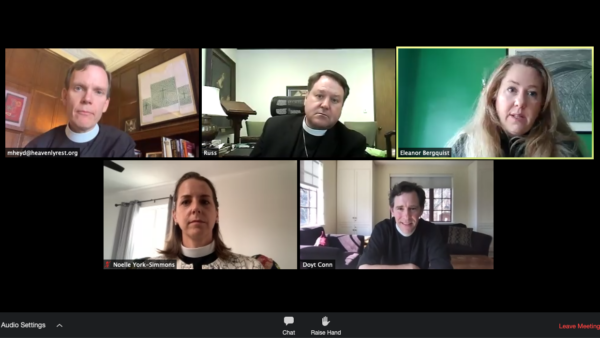 Clockwise from top left, the Rev. Matt Heyd of the Church of the Heavenly Rest in New York City moderates a discussion March 18 with the Rev. Russell Levenson Jr. of St. Martin’s Episcopal Church in Houston, Texas; Eleanor Bergquist, former epidemiology manager for the St. Louis, Missouri, Department of Public Health; the Rev. Doyt Conn Jr. of Epiphany Episcopal Church in Seattle, Washington; and the Rev. Noelle York-Simmons of Christ Church in Alexandria, Virginia, during an hourlong webinar on the coronavirus.

A common thread in the discussion was how congregations across the church are finding creative ways to keep parishioners connected with each other and to serve their communities despite the temporary loss of the church as a physical gathering space.

Bergquist offered a brief overview of the new coronavirus and the global and national efforts to slow its spread. Nearly 200,000 cases had been tallied by the World Health Organization as of March 18, and the number of confirmed U.S. cases topped 10,000, according to the Centers for Disease Control and Prevention. Bergquist underscored the importance of taking individual precautions, such as washing hands regularly and practicing “social distance” to reduce the risk of transmission, but she also noted how faith-based responses will be critical to addressing the outbreak’s mental and spiritual toll as the crisis drags on.

“It will take a lot of stamina and a lot of mental health preparedness to see your congregations through it,” Bergquist said.

Heyd also alluded to the fact that some congregations in The Episcopal Church have been hit particularly hard by the virus itself, after at least five rectors tested positive. Those five all fell ill after returning home from the CEEP network’s mid-February conference in Louisville, Kentucky. In some cases, members of those congregations later tested positive themselves or were urged to self-quarantine for 14 days because they may have been exposed to COVID-19.

“I know this is a trying time for all of us as we put our energies toward caring for our congregants and communities, who are experiencing the repercussions of the public health crisis,” CEEP Executive Director Joe Swimmer said March 14 in response to those developments. “Know that we are here to support you as we get through this together.”

CEEP is the largest group of well-resourced and endowment-supported parishes in The Episcopal Church. Its March 18 webinar, hosted on the video conference call software Zoom, was recorded and is posted online here.

Like many congregations, Christ Church in Alexandria started streaming its Sunday worship services online this month when it no longer was possible for parishioners to attend in person. Producing a live video has required the rapid development of new skills at the church. “I didn’t go to seminary for this,” York-Simmons said with a chuckle.

There is a sense of sadness and loss in her congregation at the disruption of liturgical norms, she said. “When we are pressed, when things are pretty dark, so many of us lean into church. We lean into liturgy, and we don’t have that to lean into,” she said.

But she also sees reasons for hope. Churches are supporting churches in Alexandria. Members of her congregation are finding ways to maintain a food pantry and other ministries serving the working poor. And Christ Church is trying to keep its employees on staff – from sextons to a singer – as long as possible.

She describes parish life in a time of pandemic as “building this airplane out of a Radio Flyer wagon.”

Conn spoke of a range of digital experiments in Seattle at Epiphany to keep his congregation connected. In additional to livestreams of Sunday worship, parishioners can go online to continue participating in the church’s Bible studies, and children are invited to log on to listen to a daily C.S. Lewis reading. Clergy and lay leaders also are encouraging church members to identify and connect directly with fellow parishioners who live nearby.

A “seismic shift” is underway in how the church engages with society, Conn said, “and I think the Holy Spirit calls us to never miss a moment of transformation,” he said.

It also helps to realize that we’re all in this together, Levenson said, and he cited the pastoral support he has received from Diocese of Texas Bishop Andrew Doyle, as well as from the informal network of “clergy friends around the country” who are sharing with each other how they are responding to the coronavirus outbreak in their communities.

“Right now, we’re being faced with a cultural, societal crisis,” Levenson said, and he foresees daunting economic challenges ahead for Houston, where the energy industry has been hit hard. In times like these, Christians “should be practicing our spirituality” as part of the solution, he said.