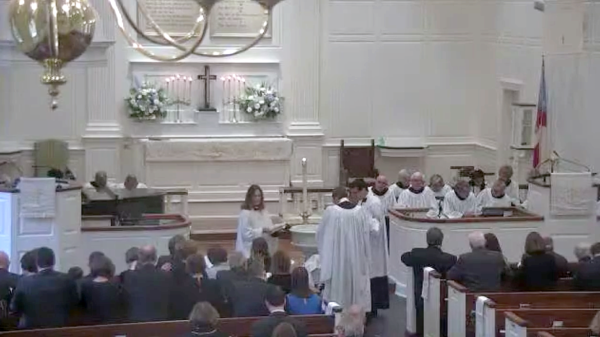 The March 16 funeral of Page Lea Sr. at Galilee Church in Virginia Beach, Virginia, is seen from the congregation’s Facebook video of the service.

[Episcopal News Service] When Page Lea Sr. died late last month at age 69, funeral planners at Galilee Church in Virginia Beach, Virginia, knew to expect a big turnout. Lea had been an active and beloved member of the community and his Episcopal congregation, where he previously served as a warden and sang in the choir.

Normally, the Rev. Andrew Buchanan would have planned for an overflow crowd of about 600 people at Lea’s funeral on March 16. But days earlier, Southern Virginia Bishop Susan Haynes had called for suspension of worship services and other church activity in the diocese in response to public health efforts to slow the spread of COVID-19, the new coronavirus that has become a global pandemic.

Congregations like Galilee are rethinking nearly every aspect of parish life, as the coronavirus spreads unchecked across the country infecting thousands of Americans, and funerals are no exception. A majority of bishops have joined Haynes in canceling in-person worship services after public health authorities warned the virus easily could be transmitted at large gatherings, leaving congregations to make tough decisions about how to respond to grieving families.

For future funerals, Galilee likely will ask those families to wait if possible, but “we felt a pastoral responsibility to hold the funerals that we committed to hold,” Buchanan, Galilee’s rector, told Episcopal News Service. So, for Lea’s funeral and a March 17 funeral for 96-year-old Mary “Perk” Brown, the church livestreamed the services on its Facebook page and encouraged mourners to take advantage of that alternative to in-person attendance.

Lea’s funeral still drew more than 100 people to the church, Buchanan said, but hundreds more watched the service online instead, with some commenting that they were grateful for that opportunity. A smaller turnout of about 80 mourners attended Brown’s funeral, and the live video again earned positive reviews from those who stayed home.

Episcopal congregations are taking similar approaches to weddings, often asking couples to postpone unless they can limit the services to just a few people. The Centers for Disease Control and Prevention issued guidelines on March 15 calling for the cancellation of gatherings of 50 or more people, and the White House followed up March 16 by advising an even lower threshold of 10 people.

New: Starting immediately and for the next 8 weeks, CDC recommends cancelling all events of 50 or more people. Full recommendation here: https://t.co/LrjUt4rl7B #COVID19 pic.twitter.com/OroIqhTYJo

Galilee is a large congregation, with Sunday attendance usually toping 500 people across three services, and it typically averages one or two weddings a month. All but one of the weddings it had scheduled for May have been rescheduled for the fall, Buchanan said, and the May wedding still on the calendar will be for only about 10 people. The couple will plan a larger wedding reception at a later date.

Like Galilee, Episcopal Church of the Ascension in Dallas, Texas, doesn’t have any weddings on its schedule until May. The rector, the Rev. Paul Klitzke, told ENS he is hopeful that Ascension will be able to keep those dates, if conditions improve in the coronavirus outbreak.

As for any funeral requests, “where possible, the hope is that those will be postponed,” Klitzke said, but he is open to holding a small service just for the family if that is requested. A more public memorial service could be arranged for the future.

He also acknowledged the grim fact that the coronavirus will bring more requests for funerals since “the virus may claim some lives of those that we love. That’s the much harder piece to account for.”

COVID-19 has been diagnosed in all 50 states, pushing the number of identified cases in the country to more than 7,000 as of March 17, and the nationwide death toll has topped 100. More than 7,000 people have died worldwide.

Its symptoms are similar to influenza and, in many cases, are mild or even undetectable, though the disease can be particularly dangerous for high-risk patients, such as older individuals and those with underlying health problems.

Presiding Bishop Michael Curry issued a letter to The Episcopal Church on March 17 encouraging the cancellation of in-person worship services as a precaution, with the expectation that this also would affect Holy Week and Easter celebrations.

“It is reasonable to assume that some form of recommendations restricting public gatherings will continue for some time,” Curry said. “Considering this changing landscape, I believe that suspension of in-person public worship is generally the most prudent course of action at this time.”

Diocesan bishops across the church responded with statements of their own – if they hadn’t already issued such directives – calling for cancellations in their dioceses while emphasizing online streaming options for worship. Several of the bishops specifically addressed the question of funerals.

“Postpone funerals and weddings to a later date,” said Bishop Russell Kendrick of the Diocese of the Central Gulf Coast, which includes the Florida Panhandle and southern Alabama.

Louisiana Bishop Morris Thompson also advised churches in his diocese, in and around New Orleans and Baton Rouge, not to hold memorial services and to postpone interment to a later date if possible. “However, we are the church and we will continue to bury our dead,” he said. “So, if there is no other option, services should be limited in scope (graveside, for example) and size (immediate family only).” 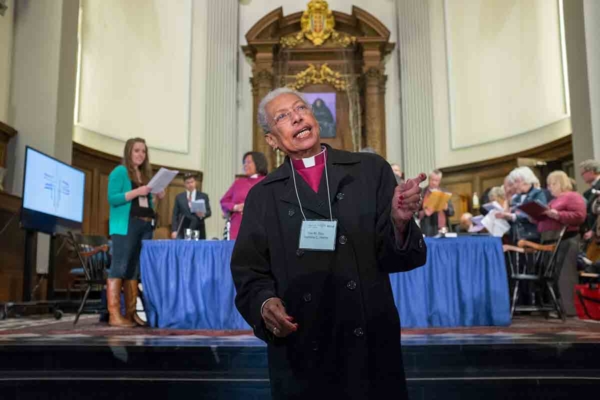 The Diocese of Massachusetts cited the coronavirus in announcing that plans were pending for the funeral of Bishop Barbara Harris, the trailblazing retired bishop suffragan who died March 13 at age 89. A service will be held at Washington National Cathedral in the nation’s capital, but “details will be set at a later time” because of restrictions on travel and gathering size, the diocese said.

In Oklahoma, “exceptions for funerals is on a case-by-case basis in consultation with the bishop,” Bishop Ed Konieczny said in a March 13 message.

And Virginia Bishop Susan Goff, who on March 11 was one of the first Episcopal bishops to order the congregations in her diocese to halt in-person worship, addressed funerals in a follow-up message: “Where possible, postpone. If that is not possible, do the service either without communion or with communion in one kind. … Be sure to talk with the family. The time around a funeral is a time of fear and anxiety, and you will need to exercise your best pastoral skills and make your best pastoral decisions.”

In Connecticut, Bishop Ian Douglas did not mention funerals specifically in his March 13 letter that urged clergy and lay leaders in his diocese to cancel in-person worship services. The Rev. Gillian Barr, rector at Calvary Episcopal Church in Stonington, decided to proceed March 14 with the funeral of a 95-year-old priest, which drew about 50 people, but she expects to handle future requests for funerals differently – either with even smaller services or postponements.

“I think I would have to customize it to the family,” Barr told ENS. And with the congregation no longer gathering in person for now, the funeral “was actually the last full-blown worship service we’re going to have for a while.”

Galilee Church in Virginia Beach has begun offering online Sunday worship services while in-person worship at the church remains suspended. Given the positive response to the live video of the recent funerals, Buchanan thinks the church will start offering that as a possible option if requested by families for future funerals.

“Now that we’ve gone to livestream for funerals, I don’t think there’s any going back,” he said.