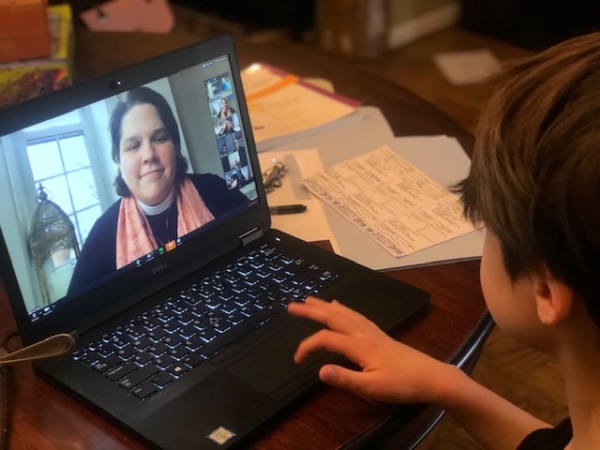 [Episcopal News Service] Since the COVID-19 pandemic abruptly ended in-person gatherings for many congregations in The Episcopal Church, clergy and lay leaders are adopting a variety of technological tools to keep their parishioners engaged and supported. Within the span of just a few days, Facebook groups and Zoom videoconferences have replaced church buildings as congregations’ gathering places, although lower-tech options are proving useful too.

Sunday, March 15, was a crash-course in livestreaming services for many churches, with YouTube and Facebook Live being the most popular platforms. But livestreaming isn’t just about broadcasting video; many clergy are making use of additional functions that make virtual services feel more like in-person ones.

Like many parishes, Christ Church Cranbrook in Bloomfield Hills, Michigan, is trying to make its online services as interactive as possible. In addition to the livestream video and the order of service (available in PDF format), its new Church At Home webpage contains a field where parishioners can enter prayer requests, which are sent to an iPad in the church in real time and read aloud during the Prayers of the People. For the offertory, worshippers are directed to a link where they can make donations and pledge payments online. And after the service, parishioners can fill out forms to let church leadership know what kind of help they need or are able to give – “How Can We Serve You?” and “How Can We Help You Serve Others?” People can offer or request help running errands, ask to speak to a priest, or volunteer for the parish-wide phone check-in.

“This past weekend, we are still tabulating the ‘virtual attendance,’ but we went from a typical weekend in-person ASA (average Sunday attendance) of 500 to perhaps as many as 5,000 – including American Episcopalians quarantined in Italy who sent us prayer requests which we read into the prayers of the people!” the Rev. Chris Harris, associate rector, told Episcopal News Service by email.

Outside the standard Sunday services, clergy are finding that Facebook Live and the videoconferencing app Zoom can help keep congregations connected, even when they can’t physically come together. Many are using those tools to offer Bible studies and virtual prayer services like Compline – which Western Massachusetts Bishop Douglas Fisher is offering via Zoom every evening at 8 p.m.

At Virginia Theological Seminary, which has closed its campus but is running its classes online, students are taking turns leading Morning Prayer and Compline via Facebook Live on a closed page for the VTS community, said Cara Ellen Modisett, a seminarian and postulant for the priesthood.

“The Facebook comment thread for each, including prayers and intercessions at the appropriate points in the liturgies, is pretty lively,” Modisett told ENS.

And with no way to socialize in person, the students are doing that virtually, too. The trivia night that used to be held at the campus pub is continuing via Zoom.

The Very Rev. Michael Sniffen, dean of the Cathedral of the Incarnation in Garden City, New York, invited his congregants to participate in Washington National Cathedral’s livestreamed Eucharist on March 15 and then join him for a virtual coffee hour on Zoom.

“It was great!” Sniffen told ENS. “About 40 parishioners joined. … Some were dressed for church, others in pajamas. Many showed off their favorite coffee mugs. We touched base about how people were doing, talked about how we could best stay connected personally and spiritually in the weeks [ahead], and decided that we will certainly do this together every Sunday we are apart.” 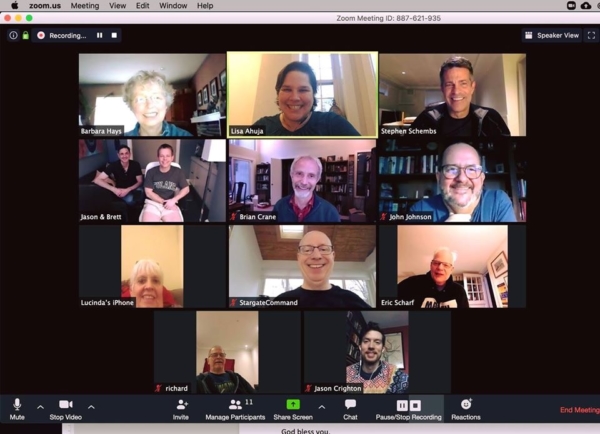 Forward Movement, the Episcopal ministry focused on producing devotional and evangelism resources, offers its popular “Forward Day by Day” devotional booklet online and by podcast. The Rev. Scott Gunn, executive director, also recommends an old but enduring Episcopal resource: the Book of Common Prayer, which also is available online and in app form for those who don’t have a copy on their bookshelves. Individuals or families can make the Daily Office, Morning Prayer or Evening Prayer the basis of an at-home worship routine.

“I think part of what we need to realize, in my opinion, is that we might be looking at a time when we’re encouraging laypeople to re-create more ownership of their own prayer and worship life,” he said, “There are some families who may be well suited to saying Morning Prayer on their own in their living room. … That’s also church.”

For parents who suddenly find themselves in the unexpected role of homeschoolers because their children’s schools have closed, Forward Movement is working with Forma, the Episcopal formation ministry, to expand their “Faith @ Home” partnership from a once-a-week resource to a daily offering, featuring readings from Scripture, related videos and activities.

Forward Movement is also partnering with TryTank — an innovation lab sponsored by VTS and General Theological Seminary — to expand a project TryTank launched about a year ago. TryTank programmed Alexa — the voice of Amazon’s smart speakers — the pray an abridged version of the Daily Office on command. If you have an Amazon Echo or other smart speaker that has Alexa, you can simply say, “Alexa, open Episcopal Prayer.” “The Lord be with you,” Alexa will respond, and then a four-minute version of the Morning Prayer service for that day will be played.

“Within the next five days, we’re going to release a new version of it that will highlight our partnership with Forward Movement,” Lebrija told ENS. “You will now get a chance to listen to the current four-minute version … but you will also have a second option, which is to listen to the full Daily Office, the full Morning Prayer from Forward Movement. What they currently have as a podcast will be what’s played by by Alexa.”

With many people now stuck at home, the program has seen an uptick in usage. Over the past seven days, sessions were up 47 percent, though there was only a four-percent increase in unique users.

“But those people are coming back more often, as you can see,” Lebrija said.

But clergy aren’t just relying on newer technology to connect with their communities. A simpler method of communication that had mostly gone out of style has made a comeback in the age of COVID-19: the phone tree. Recognizing that many older Episcopalians may not have the skills or equipment to make use of videoconferencing or livestreaming, some churches are simply calling parishioners to check in on them. Christ Church Cranbrook, for example, is seeking volunteers to help with a “phone canvass” of the entire congregation, while the Rev. Vicki Ix, vicar of St. John’s Episcopal Church in Ashfield, Massachusetts, is focusing on the neediest in her “small but vital” congregation.

“The Pastoral Care Team in our parish has created a list of our most vulnerable (due to age and support network),” Ix told ENS. “They each have three to five folks to call and check in on. Key questions about food security, loneliness and the offer of prayer are included. We’re connecting with the local food pantry to figure out how to support their work of delivery-only.”

Preexisting phone-based ministries, like a Connecticut parish’s practice of making its services available by conference call and the Union of Black Episcopalians’ weekly Prayer Line, are infused with new meaning as the pandemic worsens. The UBE call-in ministry, which can be accessed from any telephone, happens every Tuesday night.

“Especially in these uncertain times of the coronavirus (COVID-19), join us tonight in a call for prayer for our families, the church, and the world,” UBE wrote in its weekly invitation.

Then there are even lower-tech ways of getting around restrictions on large gatherings and physical contact. The African Episcopal Church of St. Thomas in Philadelphia, Pennsylvania – famous for its distinction as the first black Episcopal church – offered drive-through Communion to its parishioners on March 15. Congregants pulled into the church’s driveway, where volunteers cleaned their windshields “as a sign of passing the peace of the Lord and as a symbol of clearing [their] vision for the days ahead,” The Philadelphia Inquirer reported.

Then they were given hand sanitizer through the windows before approaching the Very Rev. Martini Shaw and the Rev. Gerald Collins, who administered the Eucharist with gloved hands and blessed the cars with holy water.

With the pandemic spreading rapidly in the United States and Europe, it’s likely churches will see even more drastic changes to their communities in the coming weeks.

“The pastoral challenges seem to be taking our minds off the bigger picture and the pandemic of fear,” Ix said.

David Paulsen, an editor and reporter for Episcopal News Service, contributed to this story. He can be reached at dpaulsen@episcopalchurch.org.