[Episcopal News Service] Presiding Bishop Michael Curry on March 12 issued his most direct guidance yet on coronavirus response across The Episcopal Church, telling members of the House of Bishops they have his support if they and their congregations choose to cancel public worship services to help slow the outbreak of the virus.

“The next 30 to 60 days, at the least, are simply going to be unlike anything we have experienced in recent history, even including 9/11,” Curry said, reading a written statement to the bishops in front of a web camera on the final day of the three-day House of Bishops’ virtual meeting this week. “The dilemma of what we know and what we don’t know will continue to complicate our decision-making and our lives.”

The House of Bishops originally planned to meet in person this week at Camp Allen in Texas, but with authorities increasingly warning that large public gatherings could risk transmitting the coronavirus, or COVID-19, Curry shifted this meeting to a “virtual gathering” on the video networking software Zoom. 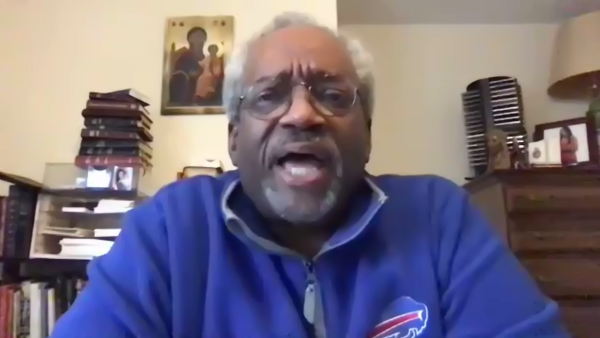 Presiding Bishop Michael Curry speaks March 12 on the final day of the “virtual gathering” of the House of Bishops.

The urgency of The Episcopal Church’s response to the coronavirus outbreak has grown day by day since the bishops began their meeting on March 10. After dioceses and congregations implemented widespread precautionary changes to liturgical practices last week, including in some cases suspension of the common cup at communion, the focus turned rapidly to whether it was safe to gather for worship services at all.

Some individual congregations canceled worship services last weekend in metropolitan regions where the coronavirus had infected church members, including some priests, such as Seattle, Washington, and Washington, D.C. Then on March 11, the dioceses of Washington and Virginia announced that in-person public worship would be canceled for at least two weeks at all 267 of the two dioceses’ churches in the nation’s capital and suburban Virginia and Maryland, including Washington National Cathedral. Both dioceses will emphasize online worship alternatives.

The Diocese of California soon followed suit, issuing a statement from Bishop Marc Andrus late March 11 asking all Episcopal congregations across the San Francisco Bay area to suspend public worship services at least through the end of March. Those congregations should research options to offer live worship services online, Andrus said, “with a small gathering of clergy, altar party and possibly choir members, making sure none in the gathering is among those most vulnerable to coronavirus.”

Curry, in his statement to the House of Bishops on March 12, alluded to an email he had received the night before from Lexington Bishop Mark Van Koevering, who was considering canceling in-person worship services in his diocese, which encompasses the eastern half of Kentucky, in response to a request by the state’s governor.

“I am loathe to cancel services, but I do support the governor’s recommendation and think that I must humbly ask our faith communities to practice a Lenten fast of public worship this week as a sign of love for one’s neighbor especially the most vulnerable,” Van Koevering wrote, according to Curry.

Curry, in quoting from Van Koevering’s email, emphasized the phrase “to practice a Lenten fast.”

“Not simply canceling services,” Curry said, but also “as a sign of love for one’s neighbor.”

(Thanks to Dr. Sharkawy for this thought.)

Curry also explained that, by offering his support for diocesan bishops’ local decisions to suspend use of the common cup or to cancel worship services, he hoped to alleviate any bishops’ concerns about overstepping canonical authority: “Neither the rubrics of the Book of Common Prayer nor the Canons of The Episcopal Church address a public health emergency such as the one we are facing,” Curry said. “This is to help uphold the good order of the church in this context in which the moral primacy of Jesus’ command to love thy neighbor must guide us.”

The global crisis over the spread of the coronavirus has intensified rapidly this week, with the World Health Organization declaring a pandemic on March 11 in response to the virus turning up in nearly all corners of the world. The global health agency reported more than 125,000 confirmed cases in 117 countries as of March 12.

Symptoms of the coronavirus are similar to influenza. A large majority of coronavirus cases are said to be mild and don’t require hospitalization, though vulnerable populations, such as children and older individuals, face a greater risk of severe symptoms. More than 4,600 people have died from the virus worldwide.

Most of the early cases were found in China, though infections are on the rise around the world, including the United States. More than 1,200 cases have been reported in the United States, as of March 12, including in 42 states, according to the Centers for Disease Control and Prevention.

As the virus spread across the U.S. this month, health officials asked people who may have been exposed to the virus to self-quarantine for 14 days, in case they, too, develop symptoms. In one of the more extreme situations involving an Episcopal congregation, hundreds of parishioners of Christ Church Georgetown in Washington, D.C., were advised to take that precaution after their rector, the Rev. Timothy Cole, tested positive.

At least two other rectors also have been found with the coronavirus: the Rev. Robert Pace of Trinity Episcopal Church in Fort Worth, Texas, and the Rev. Janet Broderick of All Saints’ Episcopal Church in Beverly Hills, California. All three of those priests attended the mid-February annual gathering of the Consortium of Endowed Episcopal Parishes, or CEEP, in Louisville, Kentucky, though no evidence has been reported so far that they contracted the virus at the conference.

Public authorities also have begun warning that the virus could spread rapidly during large gatherings, potentially overwhelming local health systems. Churches are among the spaces under scrutiny, though some bishops have advised their congregations to take precautions without necessarily canceling services.

“I am asking parishioners in high-risk groups (older people, those with underlying illnesses, anyone who is experiencing symptoms) to consider not coming to church until further notification,” Louisiana Bishop Morris Thompson said March 12 in a message to his diocese, which covers the areas in and around New Orleans and Baton Rouge. “Social distancing at this time serves the common good.”

He made clear he was not canceling services.

Curry called COVID-19 “an unprecedented challenge” in his latest written message on the outbreak, which he sent to his fellow bishops on March 11 and released to the wider church the following day.

“In this context, bishops having charge of a diocese have my support as presiding bishop if, in light of the public health situation in their diocese, they decide – for a designated period of time – to suspend the administration of the common cup to the congregation in the sacrament of the Holy Eucharist, and/or to cancel in-person gatherings for public worship.

“I encourage you, in the event of cancellation of these public gatherings, to use technology to offer worship.”

It was an unexpected focal point of this House of Bishops’ meeting, which until recently, had been seen by the bishops as an opportunity to prepare themselves for the 2020 Lambeth Conference, the worldwide gathering of bishops scheduled for July 22-Aug. 2 in Canterbury, England. Some of the liveliest debate at the bishops’ fall 2019 meeting, held in September in Minneapolis, Minnesota, had focused on Archbishop of Canterbury Justin Welby’s decision to invite all bishops in the Anglican Communion and their spouses except for the spouses of gay and lesbian bishops.

Welby’s exclusion will affect at least four same-sex spouses of House of Bishops’ members, though the topic wasn’t presented in the plenary sessions at this week’s meeting. Those sessions were conducted by webinar, with no opportunity for interaction between the bishops other than questions by email to each day’s moderators.

Instead, the bishops spent the first day listening to a professor’s presentation on faith formation in a secular world, and on the second day, members of Welby’s Reconciliation Ministry team spoke to the Episcopal bishops about racial reconciliation efforts in the Anglican Communion. On the final day, March 12, Oxford University professor Jennifer Strawbridge talked about 1 Peter, which is the book of Scripture chosen by Welby for Bible study and discussion at the Lambeth Conference.

Episcopal News Service was granted access only to the plenary sessions’ webinars. The follow-up small-group discussions known as “table time” remained private and may have touched on any number of subjects, including the Lambeth Conference.

Even so, the church’s response to the coronavirus dominated much of the discussion during this House of Bishops’ meeting, starting with Curry’s opening remarks on March 10 and followed by an informational briefing on the outbreak led by Episcopal Relief & Development.

And when the bishops broke from the plenary session on March 12 to log into their video chats for group discussions of Strawbridge’s analysis of Scripture, Curry asked them to consider additional questions related to how the lessons of 1 Peter may apply to “this time of pandemic.”

When they returned to plenary, Curry answered a few questions, including whether the Lambeth Conference would even take place, given the coronavirus outbreak. Curry said he didn’t know. Lambeth Conference planners have not announced any plans to cancel, and Curry said it may be too far in the future to make that decision.

He also drew the bishops’ attention to a statement on COVID-19 issued March 11 by the church’s Office of Government Relations, which includes some legislative and policy regulations related to the virus.

The meeting closed with a final prayer, led by Dent Davidson, chaplain to the House of Bishops. Davidson chose to sing the doxology – because when you sing, you pray twice, he said – and he threw in a good hygiene suggestion as well.

“If we sing doxology while we’re washing hands,” he said, “it will take us past the recommended 20 seconds.”