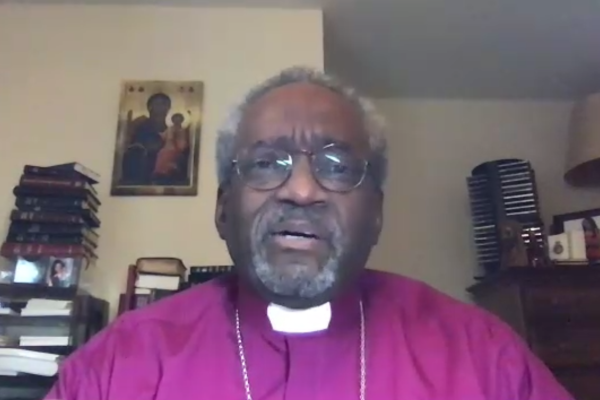 Presiding Bishop Michael Curry gives opening remarks March 10 during the online webinar of the House of Bishops, which shifted its March meeting online because of coronavirus concerns.

[Episcopal News Service] This wasn’t what anyone expected the March meeting of The Episcopal Church’s House of Bishops would look like.

When Presiding Bishop Michael Curry kicked off the meeting on March 10 with brief remarks, he did so in front of a web camera instead of in front of his fellow bishops. Their gathering this week originally had been scheduled to occur in person at Camp Allen in Texas, but days ago, Curry announced he was changing it to a virtual gathering due to the risks of bringing so many people together from all corners of the church at a time when the global coronavirus outbreak is spreading unchecked, including in the United States.

Curry acknowledged the drawbacks of this arrangement, including “for those of us who tend to be more interactive preachers” – that being Curry’s own tendency. “I can’t see your faces, so I can’t react to you,” he said. “I have no idea if you are asleep or awake, but nonetheless, I’ll give it my best shot.”

The bishops typically look forward to face-to-face time as an essential and appreciated feature of their twice-a-year meetings, and the discussions at these sessions were expected to prioritize preparations for the 2020 Lambeth Conference this summer. But in just the past week, the spread of the coronavirus, also known COVID-19, has disrupted many aspects of parish and common life across The Episcopal Church, prompting widespread changes to liturgical practices, as well as cancelations of some worship services in places with a high risk of potential exposure to the virus.

Minnesota Bishop Brian Prior made clear the parameters for this House of Bishops’ meeting would be different – truncated to three-hour sessions over three days and limited by geographic distance and the constraints of technology. “There will be no business session. There’s no ‘fireside chat,’” Prior said, as host of the bishops’ opening-day plenary webinar. “This is really meant to be an educational experience.”

Much of the first hour on March 10 was focused on the coronavirus, with a presentation by Episcopal Relief & Development. Rob Radtke, the agency’s president and CEO, opened by saying this wasn’t the topic he initially had planned to discuss, but given the “fast-changing situation,” he pledged his agency’s support for the bishops’ work responding to the coronavirus outbreak and highlighted some online resources. 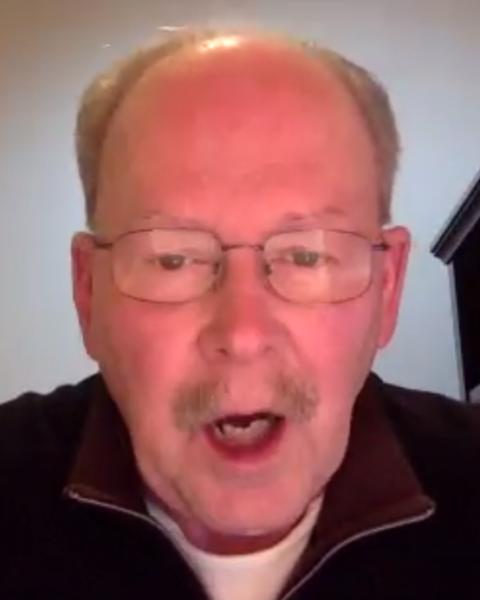 Dr. John Clements, an expert on infectious diseases, briefs the House of Bishops on the coronavirus during the bishops’ March 10 plenary webinar.

Clements told the bishops that he draws on his 40 years of experience studying various infectious diseases, and although much remains unknown about the coronavirus, he advised the bishops to prepare for the outbreak to escalate. The number of actual cases so far is likely much higher than has been reported, and eventually virus exposure will become widespread, he said.

“What we’re really trying to do is establish policies and procedures that will minimize the effect on the health system,” he said. By taking steps to slow the virus’s spread, churches can help reduce the burden on health care officials as they respond to an increasing number of cases. At the same time, Clements suggested dioceses and congregations make clear that some precautions are only temporary, so they leave themselves options for changing course or even ending those emergency measures in the future as conditions evolve.

Mears added that churches will need to balance those precautions with a desire to maintain supportive faith communities for their parishioners, even when churches are forced to cancel in-person services.

“What are the ways that we can still be church separate from and during times of stress and community challenge like we’re in now?” Mears said. “It’s really important to keep being community.”

Some congregations already are testing options for offering online worship, either to cater to parishioners who aren’t comfortable attending services in person or because worship services have been canceled due to the coronavirus outbreak.

In one of the most extreme disruptions, services have been canceled at Christ Church Georgetown in Washington, D.C., and parishioners were advised by city health officials to quarantine themselves for 14 days after the rector was found to have coronavirus.

As of March 10, that is the only congregation in the Diocese of Washington that has canceled services, Bishop Mariann Budde told Episcopal News Service in an interview after the March 10 session, but she and her diocese are prepared for the situation to worsen – including the possibility that some or most of the congregations will have to cancel in-person worship services to help contain the spread of the coronavirus.

“We’re all aware that we’re functioning in a very fluid situation,” Budde said. “This is a time to just take stock of what you can do, both in terms of providing at-home resources for people and online virtual resources for worship.”

Even some small congregations know how to post live video to Facebook, she said. Others may want to experiment with services that allow greater interaction.

Budde said she found the Episcopal Relief & Development presentation to the bishops informative and consistent with what she has been hearing from health officials in her diocese, even though much about the coronavirus’s spread remains a mystery.

“It’s sobering some of the things that we don’t know … and that we may be at this for a while,” she said.

On March 9, Budde issued an update to her diocese directing churches to suspend use of the common cup for communion wine to ensure infection isn’t transmitted in that way, a policy that echoed precautions announced earlier by bishops in dioceses on the West Coast, including Diocese of Olympia Bishop Greg Rickel.

Rickel’s diocese has been hit particularly hard by the coronavirus outbreak, with more than 100 confirmed cases and at least 20 deaths just in King County, Washington, which includes Seattle. To the east of Seattle but still in King County, Emmanuel Episcopal Church on Mercer Island was forced to cancel worship services March 8 while church facilities were being cleaned because a member of the congregation had contracted the coronavirus.

Emmanuel was one of only two Olympia congregations that have canceled services outright, Rickel told ENS after the House of Bishops’ opening session, but he is bracing for the possibility that Washington Gov. Jay Inslee soon will call broadly for churches and other public gathering places to close as a virus containment measure.

“We haven’t had that yet, but if that comes, then that of course will change a lot of things,” Rickel said. “Our governor has said that that could be a next step, and I believe we’re getting close to that.”

Several congregations already are experimenting with online video platforms, and the diocese’s liturgy committee is collecting resources to suggest creative practices for congregations to stay connected if they are unable to gather in person, Rickel said.

He also affirmed Clements’ earlier comments to the bishops that, for now, containment is a best-case scenario.

“Contain does not mean stop,” Rickel said. “It just means slowing it down so that our medical community can catch up. … It’s within our power to slow it down.”

Starting this week, Rickel ordered diocesan offices to close to the public for two weeks as an additional precaution. He and other staff members will continue working, but from home in most cases. After sitting in his office March 10 to participate in the virtual House of Bishops’ gathering, he plans to log on from home the next two days.

In the afternoon, as the bishops’ first session wrapped up, Curry issued an extended written statement on the coronavirus, including a link to an Episcopal Church webpage that includes resources for responding to the outbreak.

“It may be helpful to remember that we’re in this together,” Curry said in the prepared statement, repeating words he had emphasized to the bishops in his morning remarks.

Preparations for the Lambeth Conference were not discussed at all during the first day, Budde said, though the topic is on the agenda for March 11. She was impressed by the content so far, including a presentation about faith formation in a secular world by Andrew Root, a professor at Luther Seminary in St. Paul, Minnesota.

The online format was better than not gathering at all, “but it did also make me miss being in communion with my colleague bishops,” Budde said. Even so, she appreciated the opportunity to participate in a “table time” discussion by video with four other bishops. She also commended church leaders for shifting gears so quickly and moving this gathering online. “I can only imagine how much work it was.”