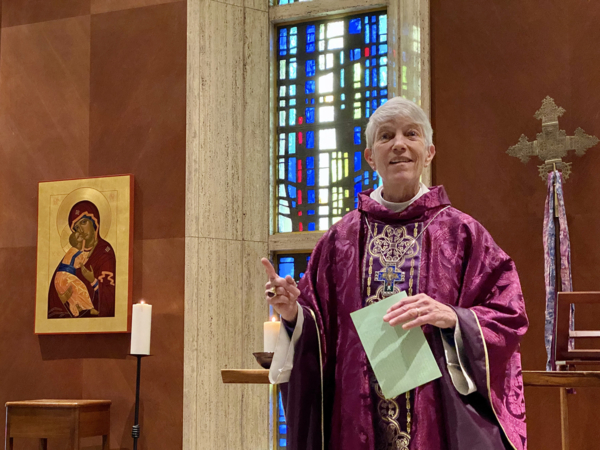 [Episcopal News Service] Plans change, and it’s OK to mourn or grieve a future that’s not to happen, said the Rt. Rev. Mary Glasspool, assistant bishop in the Episcopal Diocese of New York.

“But now you notice, I said, ‘a future,’ not ‘the future,’” Glasspool said to a dozen or so women and men gathered March 9 for Eucharist at the Episcopal Church Center’s Chapel of Christ the Lord on Second Avenue in New York, one block west of United Nations headquarters.

“The future is always in God’s hands. And even if it’s something over which we have no control, our prayer in gratitude to the God who loves us … is that it’s God’s future,” Glasspool said. “God may, in fact, bestow on us gifts that we didn’t look for. … Our call is to be open to those gifts.”

A special Eucharist marking the opening of the 64th United Nations Commission on the Status of Women had previously been planned; however, in the wake of last week’s announcement postponing the annual conference due to public health concerns associated with the coronavirus, the Church Center held its regular noonday Eucharist in deference to the UNCSW, with Anglican and Episcopal women writing the Prayers of the People.

“Be with us as we await our time together with the United Nations Commission on the Status of Women,” Glasspool said. “Uphold us in our faith, and protect us and all those who currently live in fear of the illness in the world. Teach us to share your word and your ways in our actions and in our writing.”

The UNCSW draws thousands of people to the annual meeting in New York; the main meeting has been postponed until the coronavirus no longer presents a risk to public health. The commission did, however, convene on the morning of March 9 for a procedural meeting with delegations and civil society representatives based in New York.

At that meeting, member states adopted a political declaration commemorating the 25th anniversary of the Fourth World Conference on Women, held in Beijing in 1995, and leaders pledged to ramp up efforts to fully implement the Beijing Declaration and Platform for Action, considered a “visionary” blueprint for advancing women’s rights.

It was a disappointment last week when the full meeting was postponed and it was announced that the Anglican and Episcopal delegations due to travel to New York for the annual meeting were canceled.

“In the meantime, our presiding bishop’s Episcopal delegates and the Anglican Communion delegates continue their work,” said Lynnaia Main, The Episcopal Church’s representative to the United Nations. “It’s an opportunity for us as a church to use this time to continue to educate ourselves about what Beijing is and why it’s so important for women and girls.”

This spring, Episcopal delegates will participate in an online meeting exploring how The Episcopal Church has engaged in the Beijing Declaration and Platform for Action, and each delegate will be assigned to blog about one of the critical areas of concern addressed in the blueprint.