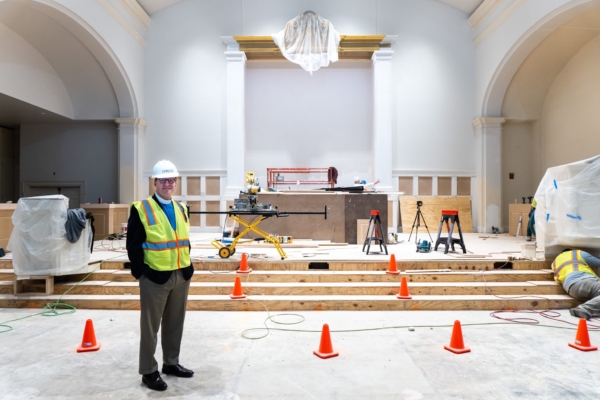 The Rev. Sandy Webb, rector of Church of the Holy Communion in Memphis, Tennessee, poses for a photo in the church’s nave, which is closed for construction until Palm Sunday. Photo: Cindy McMillion/Holy Communion

[Episcopal News Service] When parishioners at Church of the Holy Communion in Memphis, Tennessee, process into the nave on Palm Sunday, April 5, they won’t just be participating in the traditional re-creation of Jesus’ entry into Jerusalem. They’ll also be looking around a lot.

That is because Palm Sunday is serving as the congregation’s “grand reveal” of its newly renovated nave, marking the completion of a $12 million overhaul of the church facility that has coincided with the opening of a new $21.5 million 60,000-square-foot athletic and wellness facility on church property for the adjacent St. Mary’s Episcopal School.

The girls’ school was founded in 1847, and the partnership between the church and school dates to 1953, when Holy Communion offered a permanent home to St. Mary’s on the church’s campus a few miles east of downtown Memphis. Today, “the partnership reminds both of us that we’re stronger together than we are apart,” the Rev. Sandy Webb, rector of Holy Communion, said in an interview with Episcopal News Service.

The church is one of the largest in the Diocese of West Tennessee, with an average Sunday attendance of about 400 across three services. The school, with 825 students from preschool through 12th grade, had long used the cafeteria in the church’s basement, as well as a small church gymnasium, but neither facility was fully serving either institution’s needs, Webb said.

Holy Communion has worshipped in its current church building since 1950. In recent years, it had been spending considerable time and money keeping up with maintenance on its aging facilities, making it more difficult to focus on the congregation’s core values of worship, service and hospitality, Webb said.

The church’s and the school’s shared values made it natural to collaborate on a construction plan and a fundraising strategy, Webb said. Though the church and school projects were distinct, their constituencies overlapped. Donors were encouraged to give to both projects.

Holy Communion kicked off its fundraising in fall 2016, and demolition for the church project began in May 2018. The church buildings were taken down to the studs to allow modern upgrades, including air conditioning and internet connectivity. When crews began work on the nave in June 2019, the congregation began worshipping in the parish hall. Parishioners, as they look ahead to returning to the nave on Palm Sunday, have been following the project’s progress in updates on Facebook.

“It validates the students and shows that we really do care about their health and wellness,” Albert Throckmorton, St. Mary’s head of school, told the Memphis Business Journal.

Holy Communion, after providing the land and covering some of the cost, will have access to some of the space, including the gymnasium. The congregation’s support of local youth sports leagues serves about 1,000 children a year, Webb said, and the new athletic and wellness facility also will be used by additional church-sponsored community programs, such as yoga classes and ballroom dancing.

“We are very much aware that the future of the church is going to be different from the past of the church,” Webb said, and he sees these modernized buildings as part of Holy Communion’s work toward that future, in collaboration with St. Mary’s.

And with the project nearly complete, the congregation also is looking ahead to November 2020, when it will host the 39th annual convention of the Diocese of West Tennessee, Holy Communion’s first time hosting since 2008.

“I am looking forward to being at the Church of the Holy Communion next November for Diocesan Convention,” Bishop Phoebe Roaf said in a church newsletter article. “I am grateful to the Rev. Sandy Webb, the wardens and vestry as well as St. Mary’s Episcopal School for their willingness to host. This will provide an opportunity for the diocese to see firsthand the renovated and expanded space at the church and the school.”