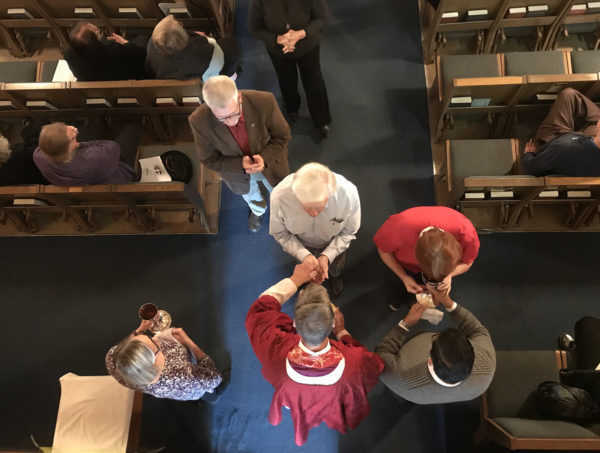 Editor’s note: After this story was published, Bishop Marc Andrus of the San Francisco-based Diocese of California also directed the clergy of his diocese to stop offering Communion wine.

[Episcopal News Service] The bishops of the dioceses of Olympia, Los Angeles and California have instructed their clergy in recent days to stop using the common cup during Holy Communion as a precaution while the outbreak of the new coronavirus worsens in the United States, though it is not yet known whether the virus can be passed in this way.

The three dioceses, along with many others, had previously issued less stringent advisories about how to limit the spread of the COVID-19 virus, with suggestions such as avoiding handshakes during the sign of peace. Many church leaders and clergy have said they do not believe drinking from the common cup poses a serious health risk, and that drinking from it is actually safer than intinction (the practice of dipping the host into the wine).

However, the outbreak of the virus in the U.S. has worsened in recent days, and there is still uncertainty about exactly how it spreads. As of the afternoon of March 5, there were 11 confirmed deaths and 177 confirmed cases of the virus in the U.S. The regions served by the three dioceses – the Seattle, Los Angeles and San Francisco areas – have been among the hardest hit so far. Nearly half of all documented cases in the U.S., and all but one of the deaths, have happened in Washington state.

In a March 4 message to his diocese, Olympia Bishop Greg Rickel said the decision to stop using the common cup was a response to a request from health officials, as several of the diocese’s churches have been “directly affected, with some of the people in quarantine.”

“We do now have one instance of possible spread by an individual(s) while in our churches, which occurred at Emmanuel, Mercer Island,” Rickel wrote. “I want to reiterate there is no evidence at all that these people contracted it there, but simply they have become ill since attending. At this point two people are ill and there is no verification if they are ill with COVID-19, but out of an abundance of caution Emmanuel did close their school and today is having their facilities deep cleaned by CDC guidelines.”

Rickel said that while the cup of wine can still be used by the priest on the altar, it should not be offered to anyone else.

“While the common cup, properly administered, has been scientifically proven to be safer than intinction, health officials are now asking us to cease the use of the common cup. For this reason, I am asking that this be done in all of our parishes starting immediately,” Rickel wrote.

Rickel also directed clergy to have as few people as possible administer the bread, and for those people to sanitize their hands before and during distribution and to try not to touch the hands of those receiving. In addition, Rickel requested that only ordained clergy – and not lay eucharistic visitors – make home Communion visits until further notice, and that offering plates not be passed from hand to hand.

Responding to another request from health officials, Rickel also directed churches to discontinue the use of baptismal fonts.

“Until we know more, I am requesting that when possible, and if at all possible, water in the fonts be drained, and that the practice of dipping the hands in the water of a font be discontinued. Scientists who have reviewed this feel that the virus could be spread in this manner, though [it is] not proven,” Rickel wrote. “They also ask that if doing baptisms, new water be used for each person. I am directing you to do this; however, this being Lent, there should be very few baptisms!”

In a March 5 letter to his diocese, Los Angeles Bishop John Harvey Taylor cited the precautions being taken by the Diocese of Olympia and said it is “prudent for us to follow suit … until we can be confident that the danger of mass COVID-19 infections has abated.”

Taylor also halted the use of the common cup in his diocese, stressing that “according to our theology of Holy Eucharist, the work of the sacrament is complete when taken in only one kind.” He also instructed churches using baked bread to switch to wafers, “since the act of breaking up the bread entails considerable contact with ministers’ fingers and hands,” and for ministers to drop the wafers into the hands of those receiving without touching them. Taylor’s letter did not repeat Rickel’s directions on baptismal fonts.

Later on March 5, Bishop Marc Marc Andrus of the San Francisco-based Diocese of California also directed the clergy of his diocese to stop offering Communion wine.

The bishops reiterated the best practices for avoiding the virus: frequent hand-washing, avoiding hand-to-face contact, coughing or sneezing into a tissue or your elbow, staying home if you feel sick and substituting alternative gestures for handshakes and hugs.

Also on March 5, Bishop Lucinda Ashby of the Diocese of El Camino Real instructed churches in her Salinas, California-based diocese to drain their baptismal fonts and refrain from passing offering plates, and she offered clergy the choice of whether to serve the common cup or limit Communion to wafers only. Bishop Chip Stokes of the Diocese of New Jersey indefinitely postponed his diocese’s annual convention, scheduled for March 7, over coronavirus concerns.

In response to the COVID-19 outbreak, The Episcopal Church has suspended employee travel to several countries, and on March 4, Presiding Bishop Michael Curry switched the upcoming House of Bishops meeting in Texas to a virtual meeting via teleconference.

“Let’s try to live out of preparation and education, and not fear,” Rickel wrote in conclusion to his message. “Let’s be the people God calls us to be. … We cannot hunker down or simply disappear, but indeed we must, as we can, help others.”

Echoing Rickel’s message, Taylor wrote: “As we face and overcome this crisis, may a deepening understanding of our obligation to watch over our closest neighbors in the name of Christ make us ever more devoted to God’s glory and the thriving of all God’s people.”