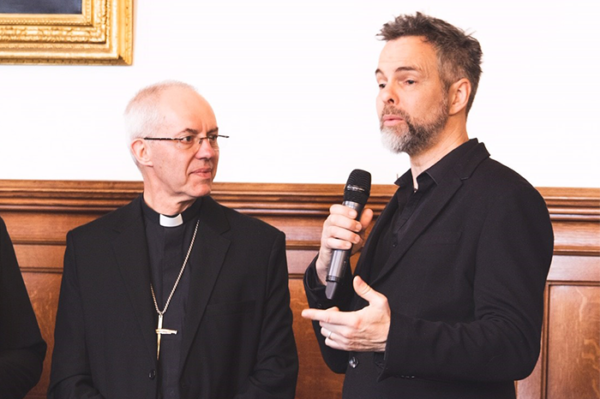 Archbishop of Canterbury Justin Welby with Pete Greig at Lambeth Palace for the launch of the Thy Kingdom Come global wave of prayer. Photo: Ben Jones/Missional Generation

[Anglican Communion News Service] The global ecumenical prayer movement Thy Kingdom Come, which started life as a simple request from the archbishops of Canterbury and York to the clergy of the Church of England, will this year take place in more than 90 percent of countries around the world. The international launch of this year’s event – which runs from Pentecost to Ascension Thursday (May 21-31) took place last week at Lambeth Palace, the official residence of the archbishop of Canterbury in London, England.

Church leaders and representatives from a number of denominations and para-church organizations gathered at the palace for the launch, which took place exactly four years to the day since the first launch. Archbishop of Canterbury Justin Welby was joined by a number of church leaders, including Pete Greig from the 24-7 Prayer movement, Bishop Nicholas Hudson from the Roman Catholic Diocese of Westminster, and Teresa Carvalho from the Catholic Bishops Conference of England and Wales. The event was streamed live on Facebook and watched by Christians from around the world.