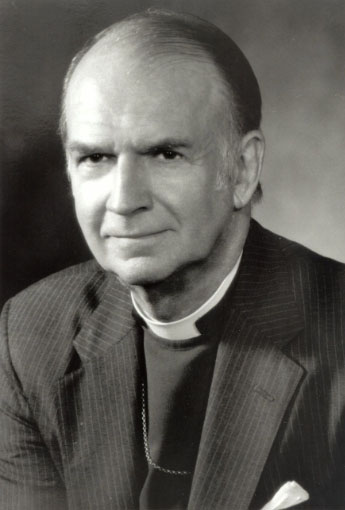 [Diocese of New Jersey] The Rt. Rev. George Phelps Mellick Belshaw, who served as the ninth bishop of New Jersey until his retirement in 1995, died peacefully at his home in Princeton on Feb. 29. He was 91.

“I am deeply saddened by the death of Mellick Belshaw, the ninth bishop of New Jersey,” said the Rt. Rev. William H. (Chip) Stokes, current Bishop of New Jersey. “Mellick was old-school gracious and kind. He loved the people God called him to serve from Hawaii to New York to New Jersey. His leadership in the Diocese of New Jersey was strong and stable during the years he was bishop suffragan and later bishop diocesan. When I was a seminarian at The General Theological Seminary in New York, Mellick was president of the board. I will always be grateful for his warm affection then and in later years when I ended up in the bishop’s chair in New Jersey. I will miss his wise care and counsel and am eternally grateful for the legacy he left for those of us who have succeeded to the office he occupied so faithfully and well.”

George Phelps Mellick Belshaw was born in Plainfield, New Jersey, in 1928, the son of the Rev. Harold Belshaw and Edith Mellick. He attended St. Paul’s School, in Concord, New Hampshire, where he was a member of the Missionary Society. He earned a bachelor of arts degree from the University of the South in 1951 and followed that with both a bachelor of arts in 1954 and a master of arts in 1959 in sacred studies from The General Theological Seminary.

After completing his studies at General, Mellick Belshaw served churches in Waimanalo, Hawaii; Dover, Delaware; and Rumson, New Jersey, where he was rector of St George’s-by-the-River for 10 years. He was elected Suffragan Bishop of New Jersey in 1975, then Bishop Coadjutor in 1982, and in 1983 became the ninth bishop of New Jersey. He served as diocesan bishop until his retirement in 1995.

Bishop Belshaw has been awarded an honorary Doctor of Divinity from the General Theological Seminary and the University of the South; he has also been the recipient of an honorary degree from Hamilton College. His service to General Theological Seminary includes 31 years on the board of trustees, as well as serving at various times as tutor, fellow, adjunct faculty member, chairman of the Board of Trustees, and acting dean of the seminary.

Bishop Belshaw has been a fellow of the College of Preachers, a member of the Commission on Peace of the Episcopal Church from 1979 to 1985, president of the Coalition of Religious Leaders of New Jersey in 1986–1987, president of the Episcopal Urban Caucus from 1986 to 1989, and a member of the Economic Justice Committee of the Episcopal Church from 1988 to 1995. In the late 1990s, he was chair of the Coalition for Peace Action, a grassroots organization that advocates for the global abolition of nuclear weapons, a peace economy, and a halt to weapons trafficking at home and abroad.

He was the editor of two well-regarded books, “Lent with Evelyn Underhill” and “Lent with William Temple,” as well as a number of articles and reviews.

He was married to Elizabeth Wheeler from 1954 until her death in 2014. The couple had three grown children and several grandchildren.

The funeral will be Friday, March 6, at 11:00 a.m. at Trinity Episcopal Church, 33 Mercer St., Princeton, New Jersey. Clergy should vest in cassock and surplice with white stoles and gather in Pierce-Bishop Hall no later than 10:30 a.m. There will be a reception at the Nassau Club, 6 Mercer St., immediately following the service.