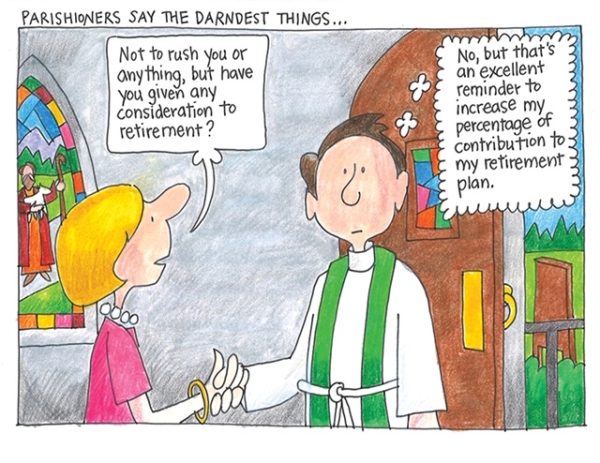 [Episcopal News Service] In the Rev. Jay Sidebotham’s hand-drawn world, “safe church” isn’t a training. It’s a parish encircled by a thick, crenellated concrete wall, which itself is surrounded by a moat filled with toothy beasts. The church’s “Welcome” sign isn’t visible to visitors who approach the outermost layer of defense, a ring of razor wire.

“I believe there are easier ways to keep your church safe,” a man tells the rector, both dwarfed by the impenetrable fortress that is protecting the tiny church building within.

That’s just one of the hundreds of Episcopal-tinted cartoons Sidebotham has drawn, and it has a name: June 2020.

In addition to his main duties as director of RenewalWorks, Forward Movement’s church vitality and spiritual growth ministry, this is Sidebotham’s 20th year as featured cartoonist in the Church Pension Group’s annual calendar. Every year since 2001, 12 of his illustrations have provided monthly occasions for faith-based humor in each of the 10,000 calendars that are distributed, mostly by mail, to every congregation in The Episcopal Church.

For Sidebotham and other clergy members with cartooning in their professional resumes – New York Bishop Andrew Dietsche is among them – their creations are part meditation, part divine inspiration and often just a lot of fun. And while some professional cartoonists produce work worthy of museum or gallery exhibits, Sidebotham, a former “Schoolhouse Rock!” animator, said fine art isn’t his goal.

“The fewer lines I can use in a cartoon the better,” he said in an interview with Episcopal News Service. “It’s like preaching a good homily: Cut to the chase.” 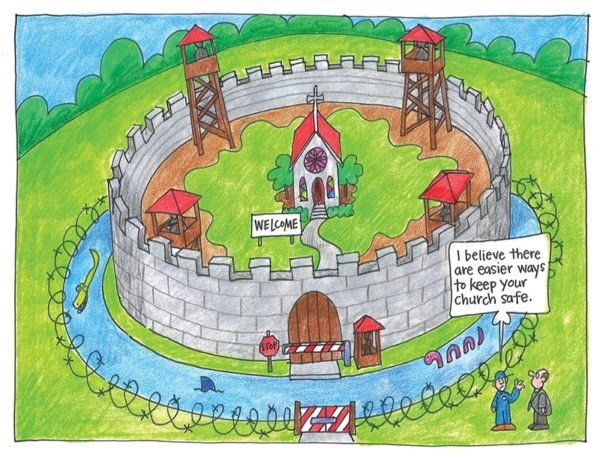 Church cartoonist is just one of the several hats worn by the 65-year-old Sidebotham, who left a career in advertising to become a priest in the 1980s. He serves part time as associate rector of St. James Episcopal Church in Wilmington, North Carolina, and as RenewalWorks director, he travels regularly to support congregations that are enriching their parishioners’ spiritual journeys. However, his cartoons arguably have garnered him the most churchwide attention.

“Jay is an institution,” Dietsche told ENS. “Jay is certainly the best known and best recognized cartoonist in The Episcopal Church.” 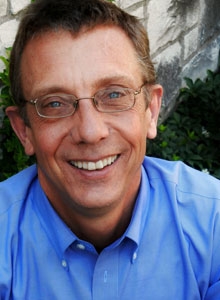 Humor doesn’t have to be edgy, but most humor is, Sidebotham said – including church humor. When a cartoonist makes a point with a joke and bit of loving-kindness, the audience may be more likely to hear the message, he said, and to consider previously hidden truths. “You’re able in those cartoons to highlight something that might otherwise be under the radar.”

As an example, he described a cartoon he drew about the regulars at the 8 a.m. worship service. A young couple – newcomers – is sitting, waiting for the service to begin, and an older parishioner approaches them and welcomes them warmly to her church.

The cartoon was shared on an Episcopal Facebook group, and someone complained that Sidebotham was promoting an awful caricature. “Within a nanosecond, from around the globe, people were writing in saying, ‘This happened to me last week.’”

He also loves to poke some fun at clergy, being a priest himself. “A lot of us get to be sort of more impressed with ourselves than we need to be,” he said. 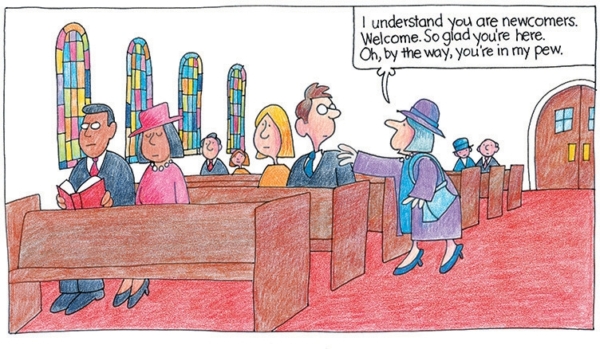 Church life is a bottomless source for inspiration in the Rev. Jay Sidebotham’s cartoons.

Dietsche thinks the church is a legitimate and fertile subject for cartoons, though the cartoonist also must respect Episcopalians who are serious in their beliefs.

“There’s plenty of room in the church to find absurdity or humor, not so much about the faith itself,” he said.

When Dietsche was in his 20s working as a commercial illustrator in Southern California, cartoons were his specialty, until he felt called to the priesthood in his 30s. He suggested that the club of Episcopal clergy who cartoon might be rather small. A fellow seminarian of his was an avid cartoonist, though Dietsche, now 66, isn’t sure if his former classmate continued cartooning as a priest.

The Rev. Nancy Hills, 63, sometimes preaches about her love of old cartoons at Christ Church Episcopal in Whitefish Bay, Wisconsin, where she is a deacon. Cartooning and church life are part of her heritage: Her father, the Rev. Donald Hays, was a longtime parish rector, including at Christ Episcopal Church in Pittsburgh, Pennsylvania, and he would illustrate his sermons for children during Sunday morning services.

Like Sidebotham and Dietsche, Hays worked in advertising before giving up that work to attend seminary. He was ordained as a priest in 1966, and Hills said her father enjoyed illustrating scenes from the Bible for most of his adult life, until his death in December 2016.

Hills doesn’t consider herself a cartoonist, though art has been a big part of her life. She recently retired after 25 years working as a graphic designer for the city of Milwaukee. Some of her most intricate art takes the form of colorful journal drawings.

“It’s the way I meditate,” she said. The process itself is spiritual, as are the subjects. “Everything I draw, I would say, has a spiritual base to it.”

“The act of creation is inherently spiritual,” he said, “and very much fulfilling of that aspect of my life in Christ.”

The future bishop started cartooning as a child. In college, Dietsche first studied architecture, then switched to art school and painting, but he never liked his own paintings all that much. “I said, ‘You know, Andy, you’re just not that good.’ So I destroyed them all and put together a portfolio of cartooning work.”

Dietsche found work as a graphic artist and illustrator at a small commercial art studio while freelancing for ad agencies in suburban Los Angeles and later San Diego. As a priest, he continued to find audiences for his cartoons in church publications, including the Diocese of New York’s Episcopal New Yorker magazine.

Church life offered an ample trove of punchlines. “Other people would have to tell you whether they were actually funny,” he said.

As bishop, Dietsche still illustrates his annual Christmas card, sent to more than 1,500 clergy and lay leaders in the diocese. His list of influences and favorites runs long, from Mad magazine and underground cartoonists like Robert Crumb to modern comic classics like “Calvin and Hobbes.” At home, “Barney Google,” “Krazy Kat” and other vintage comic strips hang in frames on his wall.

Some #WednesdayWisdom from Charlie Brown. pic.twitter.com/ubEL7wMUQ6

Family was influential as well. Sidebotham’s grandfather worked in advertising starting in the 1920s, as did his father starting in the 1940s, both of them on New York’s Madison Avenue. In the suburban New York home where Sidebotham and his three siblings grew up, “there was a lot of white paper and magic markers around.” Drawing was a natural childhood pastime.

“Schoolhouse Rock!” was his first job out of college in the late 1970s. Back then, before computer animation, the popular educational cartoon series was produced by hand, and many hands were needed. Sidebotham later worked for ad agencies, as graphic designer, illustrator, animator and art director, before enrolling at Union Theological Seminary in 1986.

“I found myself cartooning in my seminary classes, and people would cluster around to see what I was cartooning while taking notes,” he said.

As a parish priest in Rhode Island, North Carolina and Washington, D.C., he often was enlisted to provide illustrations for various church communications, but it wasn’t until he returned to New York to join the staff at St. Bartholomew’s Episcopal Church in Manhattan in 1999 that he connected with Church Pension Group, or CPG.

The Rev. Clayton Crawley, CPG’s chief information officer at the time, was assigned to parish work at St. Bart’s, and he asked if Sidebotham wanted to create some cartoons for the calendar. Sidebotham has been doing so ever since.

“Jay’s sense of humor is based on real life, which sometimes is funnier than anything you can think of,” Crawley said, and whatever tense topic the church is grappling with, “Jay can turn it into something we can laugh about and not get stressed about.”

Sidebotham’s process now is well established. He and a small team from CPG usually begin tossing around cartoon ideas in February or March, starting with leftover ideas that didn’t make it into the previous calendar. They also make sure they aren’t repeating a concept.

“In my limited cerebellum, I find I do an idea and I think it’s absolutely brilliant – and then I find I did the same cartoon verbatim about 15 years ago,” Sidebotham said.

Each calendar needs at least one cartoon for Lent and one for Advent. Other cartoons serve as friendly reminders about CPG products. In one cartoon, for example, a rector is in a rowboat outside his half-flooded church, with phone in hand. (It might be a good time to call Church Insurance and ask about flood insurance.) By the end of summer, Sidebotham usually is ready to submit his final artwork.

“There’s plenty of material,” he said. “There’s no shortage of topics to illuminate.”

The cartoons are casual, engaging and funny, but Sidebotham never loses sight of the higher purpose, said Crawley, now CPG’s chief church relations officer. “There’s a kind of hope – we’re working toward a common good. Sometimes we bumble it a little bit, but he can find humor in that. It’s a very Christian perspective.”

Sidebotham also is wrapping up another project for CPG in which he produced cartoons to illustrate every Gospel reading from the Book of Common Prayer’s three-year lectionary cycle. The cartoons and discussion guides in the books, “Drawn to the Gospels,” will be available to churches for use in parish materials, such as bulletins, posters and coloring sheets for children.

“It’s been a really powerful experience for me personally, in my spiritual journey,” he said, “to walk through the liturgical year thinking about what Jesus has to say, that I can put in a cartoon.”