[Episcopal News Service] The Episcopal Church has suspended official travel to a half-dozen Asian and European countries, and its dioceses and congregations are urging Episcopalians to take precautions to prevent the spread of infection as concern mounts over the growing number of global coronavirus cases.

The coronavirus, also known as COVID-19, had been confirmed in 37 countries as of Feb. 26, raising fears of a global pandemic, though so far most of the more than 80,000 confirmed infections have been in China. The virus, with symptoms similar to those of influenza, has been blamed in more than 2,700 deaths, according to the World Health Organization.

CDC does not currently recommend the use of facemasks to help prevent novel #coronavirus. Take everyday preventive actions, like staying home when you are sick and washing hands with soap and water, to help slow the spread of respiratory illness. #COVID19 https://t.co/uArGZTJhXj pic.twitter.com/yzWTSgt2IV

The U.S. Centers for Disease Control and Prevention, or CDC, warned Feb. 25 that an outbreak of the disease in the United States was inevitable, though only 60 domestic cases have been reported so far. The Rev. Geoffrey Smith, The Episcopal Church’s chief operating officer, said in an email to church employees that the health risk for now is low, though the threat locally could increase as the virus spreads.

“While we don’t want to overreact, we do not want to underestimate the potential of this situation either,” Smith said in his email, which was prompted by the CDC warning.

Episcopal Church staff members were advised that travel to China, South Korea, Japan, Iran, Italy and Hong Kong is suspended, and anyone traveling from those countries is asked to self-quarantine for 14 days to ensure they don’t have the coronavirus.

Diocesan leaders have joined Smith in advising Episcopalians everywhere to take common-sense health precautions, such as washing their hands regularly, limiting travel, minimizing contact with people who are sick, seeking medical attention if symptoms develop and, if sick, avoiding places where contact could risk infecting others, such as an office or worship service.

Episcopal Relief & Development also issued a summary of faith-based responses to the spread of the coronavirus, including printed resources for church bulletins. And the Convocation of Episcopal Churches in Europe sent an advisory to its clergy and lay leaders with prevention recommendations, while noting that deaths from the coronavirus have been confirmed in Italy. 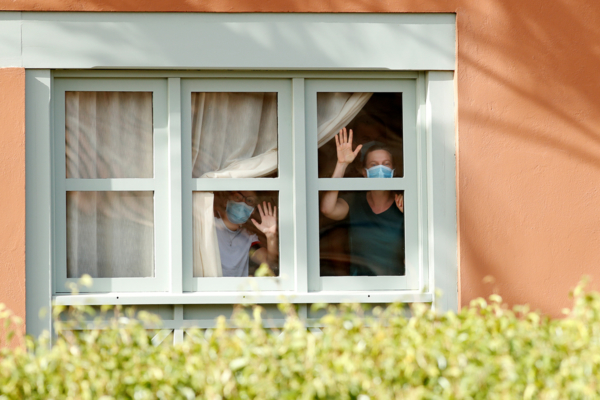 Guests, wearing protective face masks, look through a window at H10 Costa Adeje Palace, a hotel on lockdown after cases of coronavirus were detected there, on the Spanish island of Tenerife. Photo: Reuters

The warnings come after numerous Episcopal leaders returned to the United States from Taiwan after attending the consecration of Taiwan Bishop Lennon Yuan-Rung Chang on Feb. 22.

“Despite growing concerns about the coronavirus outbreak, it was considered safe to continue with the consecration service, although the evening’s consecration banquet was canceled and travel restrictions meant that the archbishop and bishops of Hong Kong were unable to participate,” the Diocese of Taiwan said in its consecration announcement.

Also this week, a patient in Northern California became the first in the United States reported to have contracted the coronavirus locally – which health experts call “community spread” – rather than from overseas travel. The number of California cases, however, remains low, according to the Los Angeles Times.

Los Angeles Bishop Suffragan Diane Jardine Bruce, who was among the bishops who attended Chang’s consecration, addressed some of the coronavirus concerns in a letter to her diocese that offered a list of precautions Episcopalians can take.

“The biggest lessons from my Asia visit are to use common sense, don’t be anxious, get plenty of rest and eat as healthily as you can,” Bruce said.

The Diocese of New Jersey sent a message Feb. 25 asking parishioners to take precautions similar to the steps recommended for worshippers during the flu season. For example, avoid intinction, or dipping the bread into the wine during Holy Eucharist.

“Intinction does little to avoid the spread of disease and may actually increase the spread, as the bread or wafer spends more time in the (possibly unclean) hand before being dipped in the wine,” the diocese advised.

The diocese also recommended parishioners avoid shaking hands at the peace if they are coughing or sneezing. An elbow bump or simple wave still gets the point across.

“Some people get exuberant and want to hug others,” Steve Welch, New Jersey’s canon for communications, told NorthJersey.com. “We make sure all of our congregants know that they can say they are not comfortable, regardless of the reason.”

The concerns across The Episcopal Church are reminiscent of two winters ago, which was said to have been the worst flu season in nearly a decade. Then as now, Episcopal leaders advised parishioners to use common sense during worship without letting their precautions get in the way of participating fully in the life of the church.

News of the SARS-related CoronaVirus spread has led again to questions about the wisdom of receiving from the Holy Eucharist from the common cup. Previous scientific consensus gives no cause for this specific concern.https://t.co/3g9jIkzwZR

The Rev. Frank Logue, canon to the ordinary and bishop-elect in the Diocese of Georgia, tried to ease renewed concerns over sharing the common cup in a Feb. 24 blog post.

“Previous scientific consensus gives no cause for this specific concern,” said Logue, who is scheduled to be consecrated bishop in May. “While there is a theoretical risk, the actual added risk is so small as to be undetectable.”