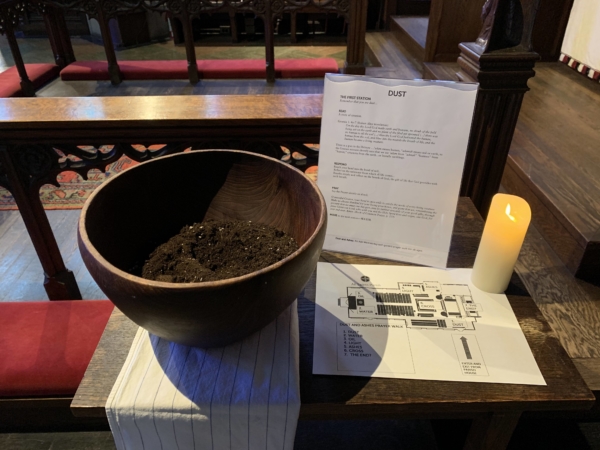 The dust station is the first stop on the Ash Wednesday Dust to Ashes prayer walk at All Saints Parish in Brookline, Massachusetts. Photo: Egan Millard/Episcopal News Service

[Episcopal News Service – Brookline, Massachusetts] While many Episcopal churches have tried adapting the centuries-old tradition of Ash Wednesday to modern life by offering Ashes to Go on the streets of their communities, the Rev. Richard Burden is trying something different this year. He’s inviting people to come into his church and have their own Ash Wednesday experience – on their own time and at their own pace.

In addition to its usual morning and evening Ash Wednesday services, All Saints Parish in Brookline – a tranquil enclave surrounded by the city of Boston – is offering a self-guided prayer walk called Dust and Ashes. Stations have been set up around the church, each with a different focus relating to the spiritual themes of Ash Wednesday, and it’s available for anyone of any age throughout the day. 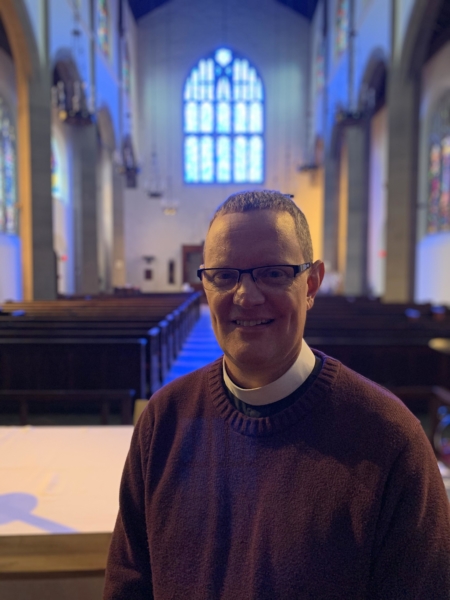 Christians around the world typically commemorate Ash Wednesday – the first day of the penitential season of Lent – by fasting and attending services during which a priest or minister uses ashes to mark a cross on their foreheads, saying, “Remember that you are dust, and to dust you shall return.”

The Dust and Ashes prayer walk provides a more flexible opportunity for prayer and contemplation on the impermanence of life. Those who can’t make the scheduled services can stop by any time, and it’s designed for all ages. All Saints’ former family minister used to do a late-afternoon Ash Wednesday service specifically for families with children, but Burden – rector of All Saints since 2014 – wanted to offer something that could fit into anyone’s schedule.

“I thought, let’s make it something that kids could do with their families but make it available to everybody,” Burden told Episcopal News Service.

Burden had also given Ashes to Go in previous years on the sidewalk in front of the church, but it’s not a high-traffic location – and he also had concerns about wanting to “be a good neighbor” to the many Jews who live nearby. Brookline is a heavily Jewish area; there are two synagogues, a Jewish school and a Jewish community center within a 5-minute walk from All Saints.

“The symbol of the cross and the symbol of ashes is potentially really problematic to a lot of our neighbors,” Burden said. “I wanted to do something that was inviting Christians to come in and take a deeper look.” 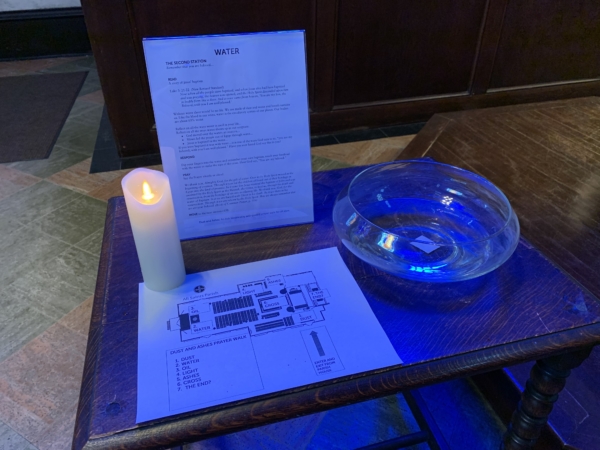 So this year, he tried something new. He adapted and expanded an Ash Wednesday service originally developed specifically for children by Elizabeth Hammond, found in her Skiturgies collection and republished in “Planning for Rites and Rituals: A Resource for Episcopal Worship” from Church Publishing. He retained the focus on tactile sensations – each station has something you can touch or even smell – but molded it into an all-ages, self-guided rite.

It starts where the Genesis creation story says human life originated: dust – or, more specifically, soil. A bowl of it sits at the first station next to a candle and a brief guide with the Genesis passage about the creation of humanity and some prompts for reflection:

“Reach your hand into the bowl of soil. Reflect on the substance from which all life comes. Breathe deeply and reflect on the breath of God, the gift of life that God provides with each breath.” 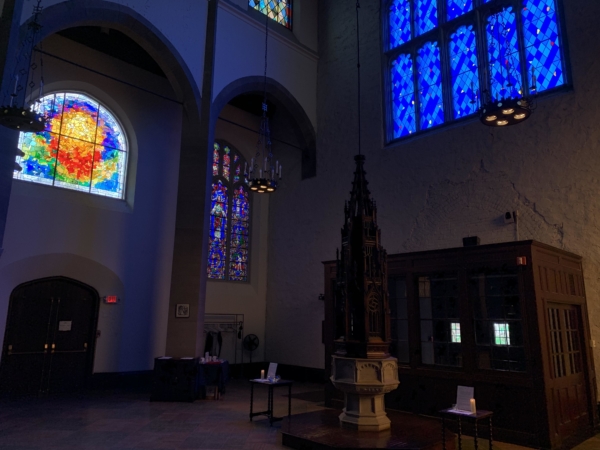 The water and holy oil stations stand in the rear of the church. Photo: Egan Millard/Episcopal News Service

Next (and convenient for those who don’t like dirty hands) is a bowl of water. The accompanying Scripture passage is the story of Jesus’ baptism from Luke’s Gospel. That story, along with other biblical references to water, the sacramental ritual of baptism and the essential role water plays in life on Earth are all linked in the reflective guide. 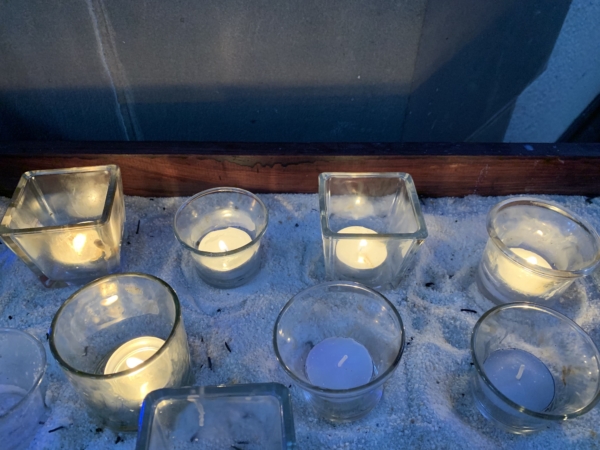 A sweet-smelling container of holy oil is next. “I always like to remind people that the ashes that we put on on Ash Wednesday go on over the top of the oil of the baptismal seal,” Burden said. “The whole prayer walk is an attempt to set Ash Wednesday in a larger narrative.”

At a station dedicated to light, participants are invited to light votive candles in memory of loved ones who have died, or for any other intention. Then they come to the bowl of ashes, which is set up in the columbarium – a small space off the nave in which the ashes of deceased parishioners are interred. Participants are invited to administer ashes to anyone who has come with them, reading the traditional passage from Genesis, or to give themselves ashes if they are alone. Burden is also available to administer them if requested. 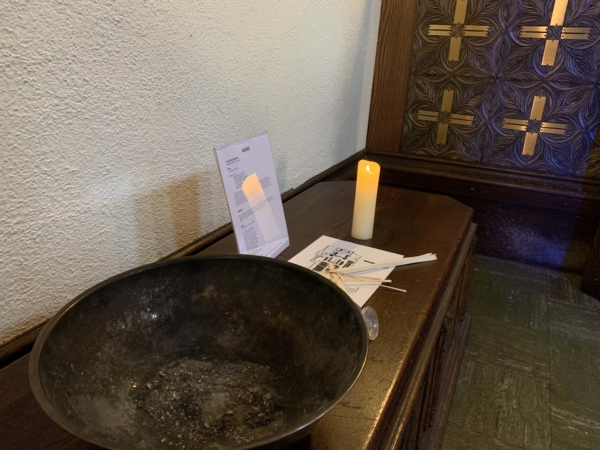 The ashes station is found in the columbarium. Photo: Egan Millard/Episcopal News Service

But the prayer walk doesn’t end there. The sixth station is a cross leaning against the main altar – the same one that will be used for veneration during the Good Friday service. There, participants find a stack of blank “permission slips,” an idea Burden borrowed from Brené Brown. 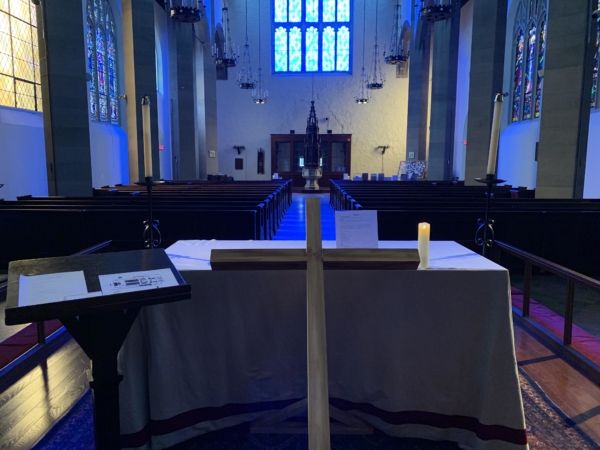 “To grow closer to God this Lent, I give myself permission to” is written at the top of each slip.

“This is a way of thinking about what to do for Lent that’s not just giving up something and not just taking on something; it’s being really honest with yourself about what you need to do to draw closer to God,” Burden told ENS. A list of suggestions sits nearby, with ideas like “Call up an old friend,” “Unplug for 15 minutes a day,” “Say the Daily Office” and “Go for more walks.”

The final station, set up at the high altar, is titled “The End?”

“Remember that God’s story doesn’t end, and you are with God always,” the guide reads. It embodies the concept of “burying the alleluia” – the practice of omitting liturgical expressions of joy during Lent. At the Shrove Tuesday supper, the children of All Saints drew colorful pictures spelling out the word “Alleluia,” and those have been placed on the altar underneath a black cloth – the kind used to wrap the crosses for Good Friday. 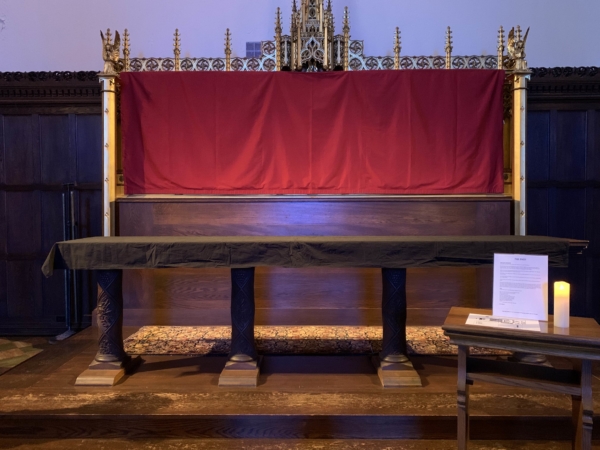 Drawings spelling out “Alleluia” are hidden under the black cloth at the final station. Photo: Egan Millard/Episcopal News Service

The drawings will remain under the cloth on the high altar until Holy Week, Burden said. “This is another visual reminder that can be up here through all of Lent, that there’s a promise coming – we can’t quite see it yet, but there’s a promise there.”

“The journey with God and to God goes far beyond death,” the guide reads, “and resurrection is always possible even when it is hard to see.”