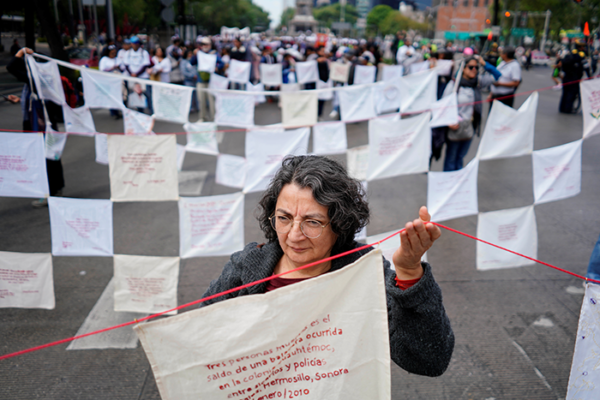 Human rights activist Ana Sepulveda carries pieces of cloth with names of missing or killed people during a protest against violence in Mexico City on Jan. 26. Photo courtesy ACNS

[Anglican Communion News Service] The Anglican and Roman Catholic churches in Mexico have joined forces to support families who are campaigning for the return of tens of thousands of missing people. The missing are victims of the increasing violence spurred on by drug cartels. Most are thought to have been killed.

A year ago, Mexico’s minister for human rights, Alejandro Encinas, told journalists that government estimates put the number of missing at 40,000. He said that the government knew of more than 1,100 secret graves and that local coroners had 26,000 unidentified corpses. The figures “give you an idea of the magnitude of the humanitarian crisis and the human rights violations we are dealing with,” he said.

Today it is estimated that some 60,000 people are missing, with more than 30,000 unidentified bodies in local morgues.