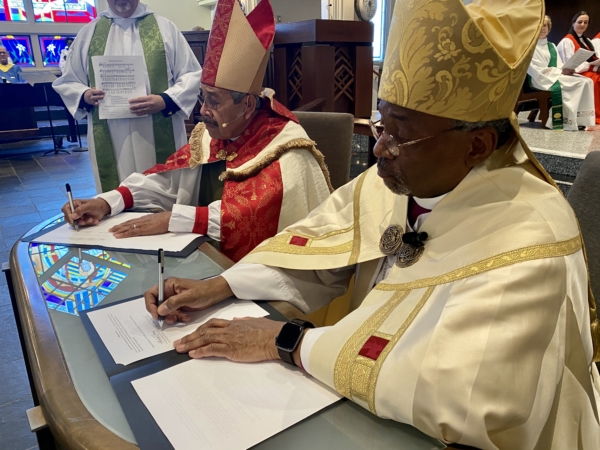 “This is a wonderful day and it may not make a splash in all the news media, but let the record note that peoples live together in the Americas, that people who share a common border, people who follow the way of Jesus – following in this Jesus – there is no border that divides us,” said Curry during a time for reflection in the service. “God created the land; human beings made the border. And so, as the old song says, ‘In Christ there is no east or west, in him no south, no north, but one great fellowship of love throughout the whole wide world.’

“It is this fellowship of love following in the footsteps of Jesus that brings us together this day, and in Jesus Christ our friendship grows deep and it will last long. In Christ there is no border.”

The agreement marks a transition in the relationship between the two churches, which dates to 1875. At one time, the church in Mexico was part of Province IX, which encompasses The Episcopal Church’s dioceses in Latin America and the Caribbean. In 1994, the Anglican Church in Mexico entered into a covenant agreement with The Episcopal Church and became an autonomous province of the Anglican Communion. The covenant, which included a financial stipend as the church in Mexico worked toward financial independence, expired at the end of 2019. 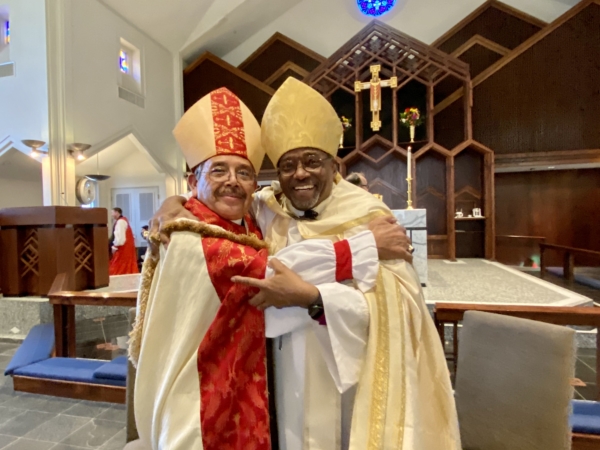 Presiding Bishop Michael Curry, right, and Archbishop Francisco Moreno embrace following the signing of a bilateral agreement between The Episcopal Church and the Anglican Church of Mexico. The bilateral agreement replaces a 25-year covenant between the two churches and brings them into a reciprocal relationship. Photo: Lynette Wilson/Episcopal News Service

“The 25-year pact is coming to an end, but the friendship continues. It’s solid,” said Moreno in an interview with ENS. “This is a brand-new era in the Province of Mexico because we’re beginning a new chapter in our growth, as a culture, as our own idiosyncrasy in our own country. This [agreement] greatly benefits us because it helps us mature in our faith, and for the longest time, we’ve been friends across borders. The church right now is deeply committed to being autonomous. It’s looking for ways to provide for itself and to look for ways to continue programs with our own resources.”

The bilateral agreement’s signing took place during a special Eucharist held in the afternoon at St. John’s Episcopal Church here in Chula Vista, a city just south of San Diego and slightly north of Tijuana and the U.S.-Mexico border. The site was chosen intentionally to call attention to the ongoing migration crisis unfolding along the border. The agreement’s preamble recognizes that, despite the political difficulties facing the United States and Mexico, the two churches are called to “share a ministry of prayer and collaboration through the gifts and talents we have to help us in mutual growth where we reflect the kingdom with our actions of justice, peace and love through service, education and the expansion of ministry.”

“Our two churches are tied together by a common history. We share a border. We basically live in the same land. The border was drawn by man, not by God. And so, while we are two peoples, we actually are all Americans, and therefore we are a common people,” said Curry during an interview with ENS in St. John’s courtyard. “It’s important, I think, for Episcopalians and for others here in the United States to know that, whatever differences or issues our government may have, that in Christ there is no east nor west and in him no south, no north.

“And therefore, we join hands with our brothers and our sisters, our siblings, our friends in Christ, to do work of humanitarian concern, to do work that helps to right wrongs so far as we are able to do so, to join hands to follow in the way in the teachings of Jesus because his teachings and his way can overcome divisions of people. And if we can model that, then maybe our governments can, and that’s a message that our people need and, I trust, the people of Mexico as well.”

Though largely symbolic, the Eucharist and agreement’s signing ceremony speak to the two Anglican Communion churches’ ongoing commitment to shared ministry, the fight for justice and mirroring the presence of God in the world, said the Rev. Glenda McQueen, The Episcopal Church staff officer for Latin America and the Caribbean.

“The bilateral agreement speaks about our desire to be together as we bear witness in the world. Borders don’t divide us; borders don’t separate us; walls do not separate us. The Christian commitment goes beyond that, and Christians have found ways throughout history to respond to the call for justice, the calling to work with human beings and to walk with them in the different stages of their lives,” said McQueen in an interview with ENS. “As the agreement says in the preamble, ‘Although these are times of difficulty and conflict between the United States and Mexico, that does not stop the church.’ On the contrary, this is a time when the church is called together to work and to be the church.” 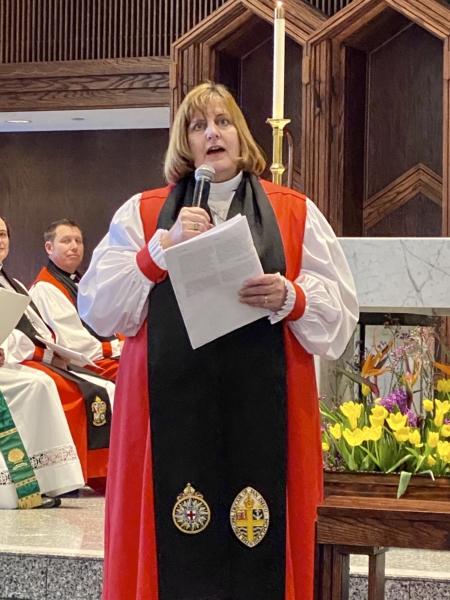 A 16-member bilateral committee with 10 representatives from the Anglican Church of Mexico and six from The Episcopal Church authored the bilateral agreement, which defines how the two churches will share resources and maintain existing relationships and form new ones.

“It’s easy to think just in terms of our own selves and kind of get into our own little fishbowl, but the fact is we’re part of what is arguably the third largest group of Christians worldwide, the Anglican Communion,” said the Rev. Charles Robertson, the presiding bishop’s canon for ministry beyond The Episcopal Church. “This summer we will see the bishops of all the churches meeting together at the invitation of the archbishop of Canterbury for the Lambeth Conference. This only happens every decade or so, and it is a reminder to all of our churches, through our bishops, that we are not alone. … We do whatever is needed together to further the good work of the Gospel.”