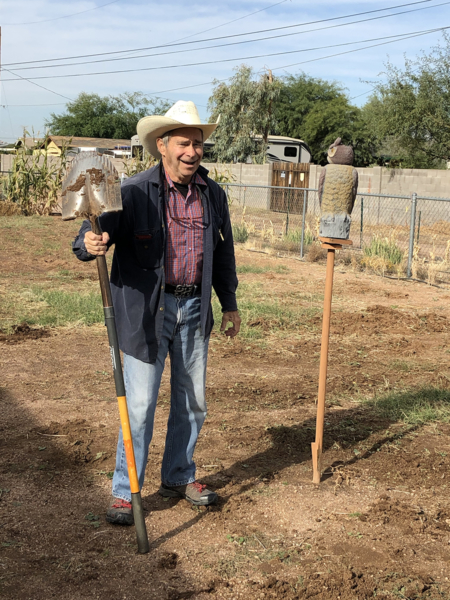 In 2006, responding to food insecurity in its own neighborhood where within a 5- or 6-mile radius, 35,000 people live at or below the federal poverty line, rather than open a food pantry or run a soup kitchen, church members began collecting spare change in cups labeled “A Million Meals for Our Neighbors.” By consolidating members’ coins and making donations to existing feeding programs, Transfiguration has provided 1.4 million meals for its neighbors.

“We do that by making grants to the agencies in our own neighborhood, like soup kitchens and box distribution programs, and when we can, we cover their bill with United Food Bank,” said Bill Robinson, a Transfiguration member. “By paying the food distribution agency rate, we pay a gross weighted average of about five cents a pound, regardless of the value of the food; it could be T-bone steak and it would be five cents a pound.”

The donations, as Robinson explained, have a 20-to-1 multiplier effect. For example, a $200 donation to United Food Bank pays for 2,000 pounds of food. Building on the church’s already strong commitment to outreach, some members sought to take things further.

In 2014, the church dedicated a 4,000-square-foot plot of land – an area that has since grown to 10,000 square feet behind the parish hall and the former rectory – where volunteers plant, nurture, harvest and grind heritage chilis into powder sold at $10 per 4 ounces. They called it the “Crazy Chili Farm.”

“One of the reasons the chili farm was founded was to hopefully provide additional funding for Million Meals. That way, we could do the funding ourselves by earning the money, and then the farm just kind of grew like top seed,” said Robinson, the farm’s manager.

Volunteers never intended to farm two fields, but after several years’ production, the chili plants developed fusarium wilt and other wilts, so a second field was added for crop rotation.

Thirty minutes east of downtown Phoenix in the East Valley, Mesa was originally settled by Mormons who farmed cotton, grapefruit and oranges. It’s still predominantly Mormon, though the farms have largely given way to subdivisions and mobile home parks, explained the Rev. Bob Saik, Transfiguration’s rector.

The “parks,” as locals prefer to call them, can be as large as 1,000 to 2,000 residents; and Mesa’s favorable winter climate attracts snowbirds and retirees. Retirees and part-time residents make up the majority of Transfiguration’s members. In the summer, average Sunday attendance reaches between 80 and 90, and it climbs to 150 in the winter.

The church’s reputation as a strong supporter of outreach has served to attract members, something strengthened by the chili farm’s appeal to volunteers and gardeners. 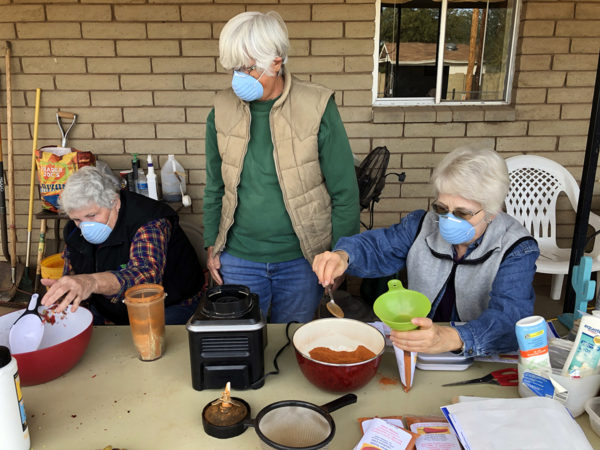 On a Monday morning in December, three volunteers wore breathing masks as they worked outside on a folding table grinding chilies into powder, which they weighed and packaged in small plastic bags. Despite the masks, the volunteers and anyone within 10 feet of the table coughed from chili dust.

The volunteers were part of a larger group who’d gathered for breakfast in the parish hall before getting to work on the farm, which operates year-round. In the summer, the work begins at 6 a.m. and finishes by 10, when temperatures begin to climb toward 100 degrees Fahrenheit and beyond.

Laura Whayne, a winter member who spends the rest of the year in Lexington, Kentucky, where she’s a member of St. Michael’s Episcopal Church, enjoys the chili farm’s “camaraderie” and “also knowing that we’re providing a way to support outreach.”

“The people are very down to earth, very outreach-oriented, and that was my attraction to this church community,” said Schuyler, who moved to Mesa from New Jersey two years ago. A former Roman Catholic, Skylar became an Episcopalian and member of Transfiguration after volunteering with the chili farm.

“There’s a real sense of community as well as spirituality,” she said. “And I just fell in love with the chili farm because it’s a way to support outreach projects.”

Caryll Prokosch’s parents moved to the valley in the 1960s, but she stayed behind in New York, marrying and working in Schenectady.

A cradle Episcopalian, Prokosch became a member of Transfiguration in 2009 when she retired and moved to Mesa. She studied horticulture in college but worked in computers. The chili farm, she said, has allowed her to get outside and into gardening.

“I can actually get something to grow rather than killing it,” she said laughing.