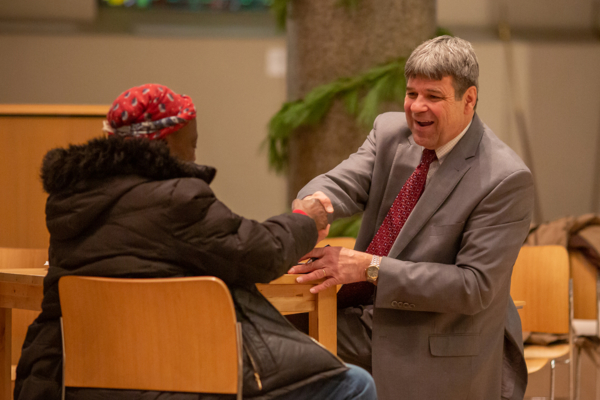 [Episcopal News Service] The individuals and families who visit the weekly food pantry at Philadelphia Episcopal Cathedral in the Diocese of Pennsylvania – usually about 150 households, according to Dean Judith Sullivan – know if they come hungry on a Monday morning, they can leave with an assortment of canned goods, fresh produce and frozen meats to help get them through the week.

The food pantry has been a ministry of the cathedral for years, but in recent months, participants have been able to take advantage of one additional benefit: free legal assistance, courtesy of Steve Chawaga, a local attorney and the founder of Episcopal Legal Aid.

Chawaga launched the nonprofit in November as a ministry of the diocese and serves in a paid position as its executive director. In Episcopal Legal Aid’s first two months, he counseled 54 clients on civil law questions during his 10 clinics held at the cathedral and a handful of other Episcopal churches around the Philadelphia area. He estimates about half of the questions relate to landlord-tenant disputes or property matters, such as setting up wills, while the other half cover a range of topics, from immigration issues to personal injury incidents.

“They’re not life-or-death questions, but they’re questions that they’re not going to find another lawyer to answer,” Chawaga said in an interview with Episcopal News Service.

That’s because many people of moderate means who would benefit from meeting with an attorney either can’t afford one or don’t have the time to look for one, Chawaga said. Other social service organizations offer pro bono legal assistance, but he sees Episcopal Legal Aid as unique in leveraging church gatherings to reach people where they already are.

Once a month at the cathedral’s Monday food pantry, “people come in for other services and supports and find out that he’s there, and they have been very appreciative,” said Sullivan, who also chairs the nonprofit board of Episcopal Legal Aid. She thinks Chawaga’s ministry fits naturally with the cathedral’s broader mission of serving the community in a variety of ways, such as through clothing drives and medical checkups.

“We have this beautiful intersection with the values of our faith, with our way of love, with our way of sharing the Gospel in this world and caring for every seeking soul, loving our neighbors as ourselves, seeing Christ in one another,” she told ENS. 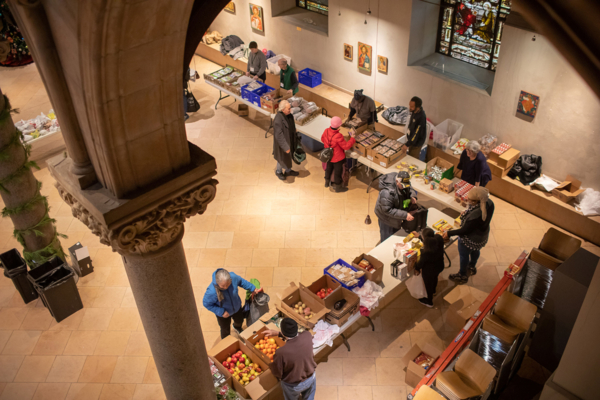 Philadelphia Episcopal Cathedral serves about 150 households at its weekly food pantry. Steve Chawaga sets up his legal aid clinic in the space one Monday a month. Photo courtesy of Steve Chawaga

Chawaga began forming the idea of a service like Episcopal Legal Aid when he was turning 60 and planning to step away from a career in corporate law. “If I want to do something else, I better get going,” he told himself.

And that something else became clearer to him at the November 2018 convention of the Diocese of Pennsylvania, for which he has long served as parliamentarian. Bishop Daniel Gutiérrez, while rallying the diocese behind the theme “Know Jesus, Change the World,” urged congregations to find ways of putting their church buildings to use serving their communities on the other six days of the week.

Chawaga thought free legal aid might fit that calling, and after the convention, he spoke to Gutiérrez about the idea. The bishop’s response was supportive and simple: Why not give it a try?

“He has got this deep and faithful heart,” Gutiérrez said in an interview. “He started digging the ground and planted some seeds, and let’s see where it sprouts.”

The diocese agreed to provide some startup funds, about $20,000, and it hopes soon to provide some space in a diocesan building, mainly for storage and administrative functions – not for welcoming clients, since Chawaga’s consultations are offered not in an office but in the community, at churches.

Chawaga grew up attending Church of Saint Asaph in the Philadelphia suburb of Bala Cynwyd, where he still is a parishioner. As the diocese’s parliamentarian, he knows many of its clergy leaders and is familiar with some of their outreach efforts and regular community events. When he pays a visit, the churches may promote his services in advance, but his main tactic for courting new clients is to set up a table at the event and invite anyone with questions to take a seat with him.

For one recent outing, Chawaga traveled to St. James the Greater Episcopal Church in Bristol, Pennsylvania, which he described as “an old industrial town, very modest economic means” across the Delaware River from New Jersey. The church holds a free dinner once a month for anyone who needs a meal, and he said it sometimes draws people who live in a nearby tent encampment.

Since this was Chawaga’s first time visiting the St. James dinner, he figured he would just introduce himself and describe his services to the 60 or so guests, and then let them know he’d be back the following month to set up his legal aid clinic.

“And then these hands started going up,” he said.

Someone had a dispute with the Internal Revenue Service. Someone else had a question about setting up wills for herself and her husband. One woman said she was having problems with her doctor but her insurance company was no help. A man told Chawaga he was facing a noise complaint at his apartment but he wasn’t to blame.

Some of the questions could be answered easily that night, while others required follow-up work.

“By the time I left, I had taken on four new clients,” he said.

Because his former corporate job involved general litigation, Chawaga said he has a broad base of civil law knowledge, though for certain issues that he can’t handle himself, he will refer those clients to another lawyer with the appropriate specialty, such as immigration law or housing law. Either way, making that initial contact with his clients is a key advantage of the church-based clinics.

Chawaga, as executive director, is Episcopal Legal Aid’s only paid staff member. As the ministry grows, he may look to hire someone to provide administrative help, though the more substantive growth will involve scheduling more clinics at church events where people who are struggling on society’s margins gather.

“If they have to go across the street, let alone another town, they won’t ask,” he said. “I’m having beef stew with them and not occupying an office and asking folks to come find me.”