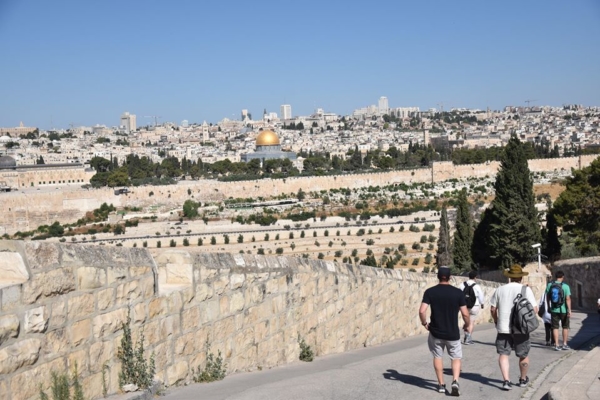 Filmmaker Brian Ide leads a group on a trip to the Holy Land in July 2019 to lay the groundwork for developing a movie about Jesus’ apostles. Photo: The Upper Room, via Facebook

[Episcopal News Service] As an Episcopalian, Brian Ide has been fixated recently on the passage in the New Testament that describes the brief period – estimated to have been about 10 days – between Jesus’ ascension and the Pentecost, during which the apostles were alone and uncertain about their path forward, praying together in “a room upstairs” in Jerusalem.

As a filmmaker, Ide wants to share that story and its spiritual implications with movie audiences. The tentative title of his film-to-be: “The Upper Room.”

“We can see ourselves in those unique 10 days,” Ide told Episcopal News Service by phone. “It’s that challenge of stepping into faith, even when we’re burdened by fear and uncertainty.”

Ide, a member of All Saints’ Episcopal Church in Beverly Hills, California, drew on his career as a movie director to help form a ministry at the church with other parishioners who work in the Hollywood film industry. In 2018, their efforts culminated in “This Day Forward,” a feature-length film about an Iowa family’s struggles with cancer and faith, for which they took a grassroots approach to finding audiences, hosting individual showings at theaters and churches around the country.

For “The Upper Room,” Ide envisions something bigger, both for the movie and the underlying ministry. His filmmaking team traveled to the Holy Land last year to flesh out a story for the new movie, for which they are budgeting nearly $3 million with hopes for a wider theatrical release. And Ide has overseen the creation of Grace Based Films, a nonprofit with a long-term plan for turning spiritually rich stories into thought-provoking movies.

“I can’t wait to see how it all comes out,” said the Rev. Anne Mallonee, who serves as chief ecclesiastical officer at Church Pension Group. Mallonee was among a handful of clergy members who joined the filmmakers on their Holy Land trip last July. She said in an interview with ENS that Ide’s energetic work mirrors a trend she has noticed: lay Christians finding creative ways of putting their talents and abilities in service of “the ministry that comes from being baptized.”

“The Spirit really does seem to be inspiring all kinds of people to be thinking in terms of mission,” she said. 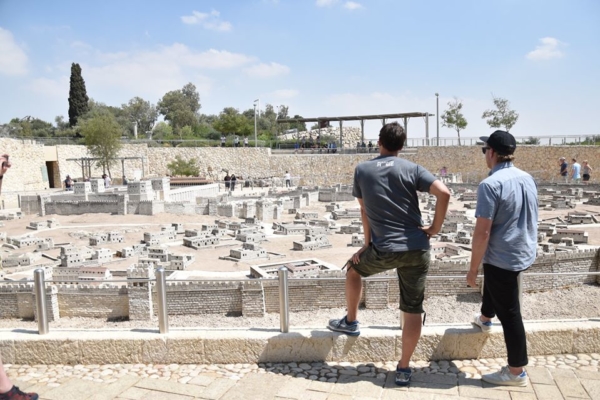 That inspiration was evident in “This Day Forward,” which is heading toward an official release June 1 on streaming services and DVD. The movie was backed by donations, and Ide and his team from All Saints’ kept the production on a modest scale.

“We didn’t have the resources of a big studio to just throw money at it. Instead, it was just sweat equity for us,” Ide said.

They worked hard not just making the movie, but also promoting it during a 53-city tour in fall 2018. Ide estimates he and his team drove 17,000 miles to introduce the movie to audiences, and they embarked on another limited tour with the film last year, through south Australia.

The filmmakers have planned a few additional showings of “This Day Forward” in the coming months, prior to its digital release, and with this distribution deal, Ide thinks the movie “will have a long life, which is great.”

His primary focus, meanwhile, has shifted to development of “The Upper Room.” The initial idea came to Ide while he was with a group from All Saints’ on a pilgrimage to the Holy Land. Toward the end of the trip, he started thinking about how the experience might shape his next film project, and he was particularly intrigued by a passage in the first chapter of Acts of the Apostles: “When they had entered the city, they went to the room upstairs where they were staying.”

The chapter continues by relaying that, after Jesus ascended to heaven, his apostles “were constantly devoting themselves to prayer,” but they had yet to receive the Holy Spirit and begin their ministry in the world.

“You can’t help but imagine that there would be a range of emotions, of fear and anticipation and imagination,” Ide said.

He began sketching narrative outlines for a possible script, and in April 2019, Virginia Theological Seminary hosted a sort of theological focus group for Ide and his fellow filmmakers that provided them with input from Mallonee, the seminary’s dean the Rev. Ian Markham, and a range of other Episcopal leaders.

With that group’s encouragement, Ide recruited Mallonee and a few others to join his filmmaking team on their own trip to the Holy Land, with the goal of developing ideas and supplying inspiration, accuracy and depth to the ultimate work of the writer and filmmakers.

It was Mallonee’s first trip to the Holy Land, and she said she was particularly moved by the group’s visit to an archeological dig where researchers were uncovering a temple where Jesus was thought to have taught.

“It helped to envision life there,” she said, and she also felt a direct connection between past and present. “Jesus is here, God is here, we are here. God’s love is here now, and we’re a part of it. It was really powerful.”

The Rev. Greg Millikin, rector at Grace Episcopal Church in New Lenox, Illinois, also joined the pilgrimage, his second to the Holy Land, and he described it as different from the overly scheduled tours that many pilgrims experience. This was more contemplative, particularly during the two days they spent in the garden of Gethsemane, he said.

Millikin has known Ide for about 20 years, since both attended All Saints’ in Beverly Hills, and Millikin has professional roots in the film business. He worked in studio marketing for 10 years before leaving his job in 2012 to attend Virginia Theological Seminary. He was ordained in 2016 and has served at Grace Episcopal Church for two years.

Now, as an informal adviser on “The Upper Room,” he sees himself as part of Ide’s theological “think tank,” and he thinks Ide’s story is mining fertile spiritual ground. “What does it mean for these disciples to have a leader leave, and that they have to kind of find a voice amongst them or some kind of direction or path forward that would end up becoming the church?”

While Grace Based Films is raising the money needed to turn “The Upper Room” into a high-caliber professional production, the writer on Ide’s team, Nick Schober, is working on finalizing a script that will draw on the pilgrimage experience and input from participants. Half of the movie will be set in the apostles’ time, and the other half will be set in the present, though all of it will be filmed on sets in the United States, due to the prohibitive costs of shooting in the Holy Land, Ide said.

He would like to begin filming this year if the financing comes through by then. The film’s success would enable more projects like it.

Churches of all denominations supported “This Day Forward,” and Ide’s nonprofit film company will continue to take an ecumenical approach to its mission. He sees a receptive audience in “people that are really hungry for honest stories about faith journeys.”