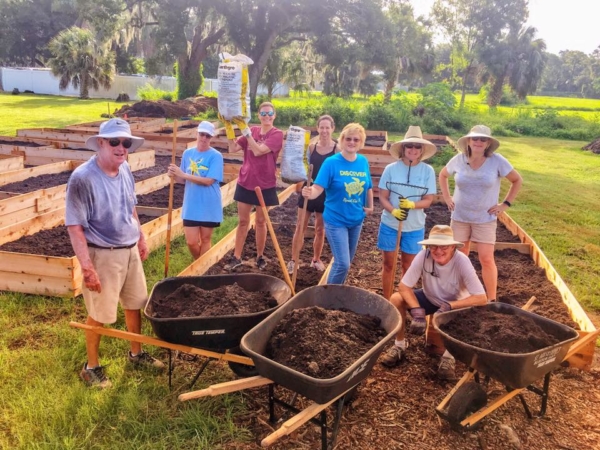 [Episcopal News Service] The Rev. Martha Goodwill doesn’t consider herself a master gardener, and though she serves as a deacon at St. Thomas Episcopal Church in St. Petersburg, Florida, her full-time job is as an accountant for the Diocese of Southwest Florida. But for the past year or so, she has been the driving force behind a lively farming partnership between her mostly white congregation and the historically black congregation of St. Augustine’s Episcopal Church.

She credits her faith for the inspiration – and her grandmother.

“That general knowledge, I’ve always had from her,” Goodwill told Episcopal News Service, describing how her grandmother taught her at a young age about varieties of plants and how best to grow them. “It’s just always been a part of my life.”

The two congregations are now working together to harvest the first fruits – and vegetables – of their joint ministry on back acreage at St. Augustine’s, which was cleared and prepared for farming with support from a $63,600 grant from The Episcopal Church’s United Thank Offering. The congregations gave it the name Benison Farm, incorporating the Middle English word meaning “blessing.”

The first round of planting has produced collard greens, mustard greens, turnips, beets, tomatoes, kale, cauliflower and broccoli. Goodwill and other ministry leaders have begun distributing that fresh produce in the farm’s neighborhood, deemed a “food desert” because of a lack of grocers nearby. They envision a monthly farmer’s market on church property for the farm’s next phase. 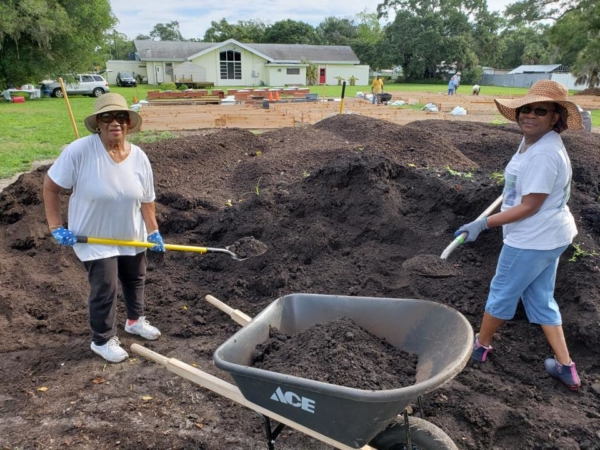 Another measure of the ministry’s success can be counted in the many volunteers from both congregations who regularly come to St. Augustine’s and build fellowship while working together at the farm, especially on Saturdays, planting, weeding, trimming and harvesting.

“We did it, and we did it together,” said Hazel Hudson-Allen, who has been a St. Augustine’s parishioner since 1992. She regularly volunteers her time at Benison Farm and sees it as a form of discipleship, “just seeing how a few hands together can make something happen.”

Partnership was fundamental to creating Benison Farm because each congregation brought a different set of assets and challenges. St. Augustine’s is an aging congregation with an average Sunday attendance of about 50. Its members were interested in remaining active in the community but were limited in how much physical labor they could apply to clearing the congregation’s overgrown lot behind the church.

When Goodwill was ordained as a deacon two years ago, she was assigned to St. Thomas, which is northeast of downtown St. Petersburg. On a good Sunday, about 200 people will fill the pews at St. Thomas. She saw an opportunity in that unused acre and a half at St. Augustine’s about 15 minutes away on the city’s south side.

“St. Thomas doesn’t have any land, but they have people that want to volunteer,” said Goodwill, 56.

The two congregations already had developed relationships through various joint events, such as Bible studies and youth group meetings. Goodwill’s congregation loved the idea of creating a garden ministry, she said. She pitched the idea to lay leaders at St. Augustine’s, who also were receptive, especially given the dearth of stores selling fresh fruits and vegetables in the church’s neighborhood.

“The need for the fresh produce is there, so the goal of the farm is to give away 50 percent of what we grow and to sell the other 50 percent in that neighborhood so that the farm can be self-sustaining,” Goodwill said.

After receiving the UTO grant in August 2018, as well as money from the diocese’s annual Bishop’s Appeal, the churches began clearing invasive plants, trees and shrubs from the lot. They installed an irrigation system, 24 raised beds and 48 smaller planters known as earth boxes. Through summer 2019, volunteers from both churches filled the beds and boxes with organic soil and compost, and congregation members planted seeds and sprouted them at home so the seedlings could be planted at the farm.

Then in August 2019, St. Augustine’s hosted a planting day, when the foster gardeners from each congregation brought their seedlings to the nascent farmland to be tucked under the rich soil – like “handling a little baby,” Hudson-Allen said.

The church farm also has room for fruit trees, and so far the congregations have planted mango, avocado and guava. Banana trees have taken root on their own, possibly tracing their origin to the community gardens that occupied part of the property years ago. “That was pretty cool,” Goodwill said, “a surprise we didn’t expect.” 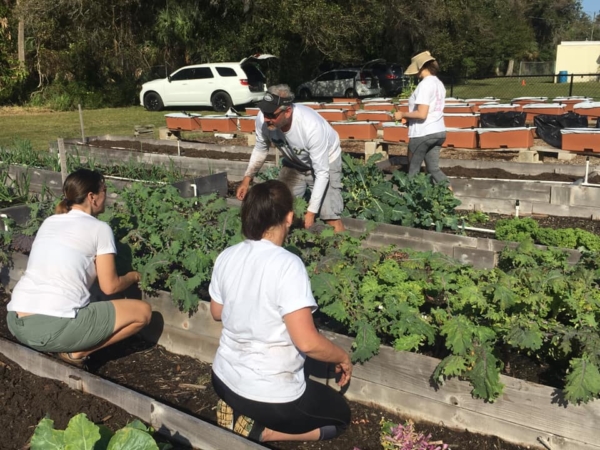 By January, some of the crops at Benison Farm were ready for harvest, though the farm is not yet at full capacity. For now, the food is being distributed for free through a local food pantry. Photo: Benison Farm, via Facebook

Benison Farm’s latest additions include squash, zucchini and sweet potatoes. Because of the warm Florida climate, the farm should yield food nearly year-round, except for a break during the hot summer months. A core group of about 10 volunteers is regularly tending to the crops, while more parishioners join them for once-a-month workdays.

Since Benison Farm isn’t yet at full capacity, the congregations are giving most of the initial harvest to a local food pantry, though they are starting to put plans in place to launch a farmer’s market soon on the church grounds and ramping up that effort throughout the year.

Goodwill also sees the ministry as a form of one-to-one evangelism, “sharing your story with other people that you’re digging in the dirt with and listening to their stories and understanding where Christ is in both of our lives.”

Hudson-Allen, a retired teacher and management analyst, is among the core volunteers. The farm has been a catalyst for other members of her congregation to get involved, even those with less time or physical ability. “There is a role there pretty much for everyone,” she said.

She also is drawn to gardening’s spirituality, which she senses even when she’s alone working in the dirt. “The Holy Spirit has had many conversations with me in the garden on the farm.”