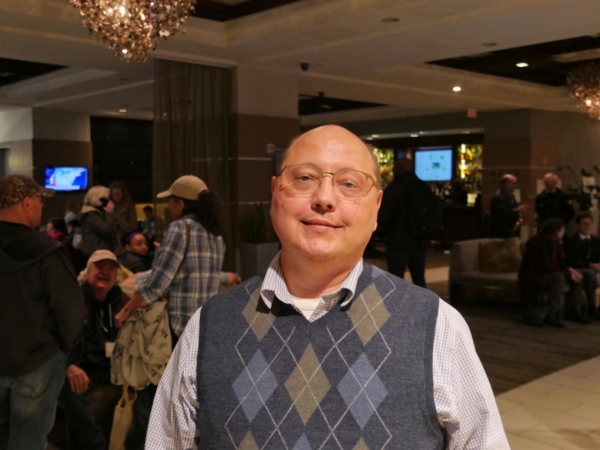 [Episcopal News Service] Integrity USA, the nonprofit organization dedicated to LGBTQ advocacy within The Episcopal Church, will have a newcomer as its next president as it continues to grapple with infighting over transparency, procedure and purpose. Ron Ward will take over as president on Feb. 1, the result of a special election to fill the remainder of the Rev. Gwen Fry’s term, which ends in 2021. Fry resigned in November after criticism from members over perceived mismanagement.

Ward was the sole candidate for the presidency, and members have expressed concern and frustration with the election process on Integrity’s Facebook group, with some arguing that Integrity’s reputation is damaged beyond repair, its mission is unclear and it should fold.

Former presidents Susan Russell, Fred Ellis and Helena Barrett have joined the calls for Integrity’s dissolution in recent weeks, with Russell writing in her blog that “it’s time to let it go.”

“I’ve had a lot of communications from folks stating that Integrity is dead. ‘Let it die. It has no purpose,’” Ward, a student at Episcopal Divinity School at Union Theological Seminary who has had no previous involvement with Integrity, told Episcopal News Service in an interview while attending the Rooted in Jesus conference in Atlanta, Georgia. “I didn’t step up to volunteer to be presiding over a Friday funeral. I would rather be involved with a Sunday awakening.”

The election was plagued by controversy ever since Fry’s resignation, mostly surrounding procedural issues. Integrity’s bylaws specify that if the presidency becomes vacant, a new president is elected to serve until the next regular election – not by the members, but by the Stakeholders’ Council, which is composed of provincial coordinators, past presidents, members of the board and other officials.

But it was unclear who was on the council, as some of those positions had essentially ceased to exist and the council had not been convened since Fry’s term began in June 2018. Aside from the board itself, Integrity as a national organization has been dormant for several years, though some local chapters are still operating.

When Integrity members asked the board to name the council members who would be voting in the election, the board declined, citing a confidentiality clause in the bylaws, but offered council members the opportunity to release their information.

The ballots that were sent to Stakeholders’ Council members did not include an opportunity to write in an alternative candidate, which is mandated by Integrity’s bylaws – an omission that further frustrated some members. On Jan. 26, Integrity announced that 19 ballots had been returned, and in the only contested race – for Stakeholders’ Council chair – Backlund beat Garner by one vote.

With Ward then the presumptive next president of Integrity, discussion on the group’s Facebook page turned to his background and platform. Ward, who was nominated by Secretary Ellis Montes after expressing a desire to run, is a longtime advocate for the LGBTQ community in Connecticut. He is now a first-year student at EDS at Union, with the goal of becoming a chaplain, and says he is “in an informal conversation about the diaconate” with the Episcopal Church in Connecticut.

Some Integrity members have raised concerns about Ward’s lack of experience with Integrity and The Episcopal Church, as well as an incident in 2012 when he was kicked off the Norwich Democratic Town Committee for “a pattern of behavior that included personal attacks and a history of absences from monthly committee meetings,” according to the town’s registrar of voters. Ward said the incident was political payback for pressuring Democratic town leaders to pay more attention to one of the town’s poorer neighborhoods, and he was defended by the New London Day in an editorial.

Ward, 55, attended mostly Unitarian Universalist churches until about two years ago, when he started attending St. James Episcopal Church in New London. His first experience with Integrity was the Integrity Eucharist at the 2018 General Convention, where he was volunteering with Episcopal Migration Ministries.

“I made a commitment to myself, when I was accepted a year ago to Union Theological Seminary, that I wanted to re-engage my advocacy within my own self-identified community,” Ward told ENS. “I’ve been following Integrity since 2018 – very thin information, not really available anywhere about who’s in charge. … When I realized that they were going to be having an election and looking for volunteers to serve, I saw that as an opportunity to step up and offer myself to serve.”

Ward has offered few details about his plans for Integrity but says he wants to revive the Believe Out Loud program, in which parishes could affirm their support of LGBTQ people and be listed on Integrity’s website.

“Just because a church or parish puts a rainbow flag out doesn’t mean they’re inclusive,” Ward said. “I think that Integrity USA has a role to play in organizing itself so that it can be a place and a resource for folks within the community to get resources they need.”

Other current leaders of Integrity echoed Ward’s belief that Integrity is still needed.

“It’s important to me that Integrity continue because I still have almost ongoing discussions with people who are being wounded by the church because of sexual orientation and gender identity,” Garner told ENS. “The fact that we have accomplished a lot in the canons, including marriage, does not mean that the work is finished.”

But others who have been involved with Integrity as members or officers disagree.

“I think Integrity has been dead for a while,” said Kaeton. “I think we’ve been afraid to admit that. And part of the reason that we’re at such a toxic level right now is because we’ve just been putting all of our energies into reviving a corpse. … We’re Christians. We believe in the resurrection. We know that something has to die before there can be resurrection and yet, there’s this anxiety, there’s this denial.”

In the meantime, Ward says his first order of business is filling out Integrity’s board.

“I’m getting to work right away after Feb. 1 identifying some additional folks to come and serve on the governing board, either formally or informally, and hoping to work toward a bigger announcement for Pride [in] June or July on how we’re going to try to move the organization forward,” Ward told ENS.