[Episcopal News Service] Clergy members in the Diocese of Olympia, in the wake of an outbreak of vandalism at their churches over the Martin Luther King Jr. Day weekend, have responded with messages of love that invoke King’s own words advocating peace and justice in the face of hatred. 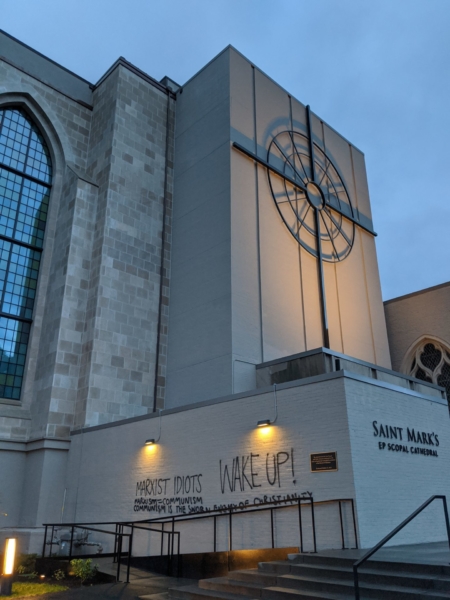 The diocese had no information that any other churches were targeted or that the attacks were connected, Josh Hornbeck, the diocese’s communications director, told ENS.

Hate-filled graffiti that singled out the LGBTQ community and Muslims was found on a door at St. Luke’s Episcopal Church in Seattle, Washington, over the holiday weekend, according to the diocese, which didn’t give an exact date. The Rev. Britt Olson, vicar at St. Luke’s, said in a statement released by the diocese that the graffiti was discovered quickly, before most arriving worshippers could notice it.

The church also has received threatening letters, emails and phone calls, “for its mission of caring for those on the margins,” Olson said. The attacks have been “deeply disturbing” and “it is infinitely worse to know that this hatred is the daily experience for many in our community.”

At St. Mark’s Episcopal Cathedral in Seattle, black paint was sprayed on a white wall forming a message in bold letters that included the phrases “Marxist Idiots” and “Wake Up!” The Very Rev. Steven Thomason, dean of the cathedral, wrote that he assumed the message was intended to provoke anger, but he felt a greater sadness upon first seeing it.

“I find myself prayerful – for those whose lives are filled with such hatred that they can justify desecrating a church, for this community that we might bring the fullness of our hearts and souls into this call to be the Body of Christ … and for this nation whose political discourse seems to condone acts such as this vandalism as justifiable in the course of partisan disagreements,” Thomason said in a written statement.

In Everett, north of Seattle, vandals spray-painted inverted crosses on the main doors at Trinity Episcopal Church on the evening of the King holiday, Jan. 20. To remove the graffiti, the doors must be sanded and re-stained, the Rev. Rachel Taber-Hamilton said. She noted that King preached “that love on the level of society looks like justice.”

Thomason, in his statement, quoted King’s reassurance that “the arc of the moral universe is long, but it bends toward justice.” 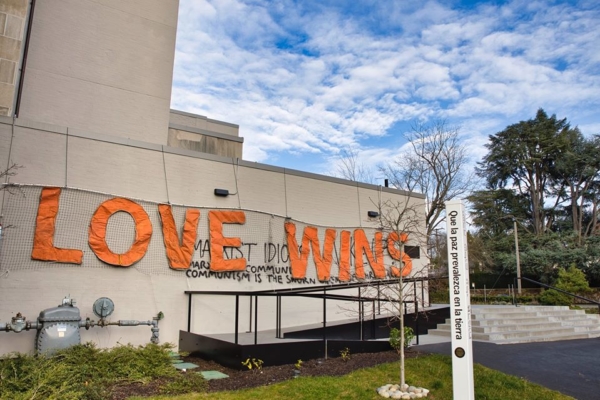 “We have work to do my friends, in the cause of justice,” Thomason said. “Let us do so in God’s name, with courage and faithfulness.”

The cathedral’s plan to immediately paint over the graffiti has been delayed by cool, damp weather in the region, cathedral communications director Gregory Block told ENS by email. “Our solution was to conceal the message by re-purposing a banner that was last used in 2014 for a visit by author Karen Armstrong,” he said.