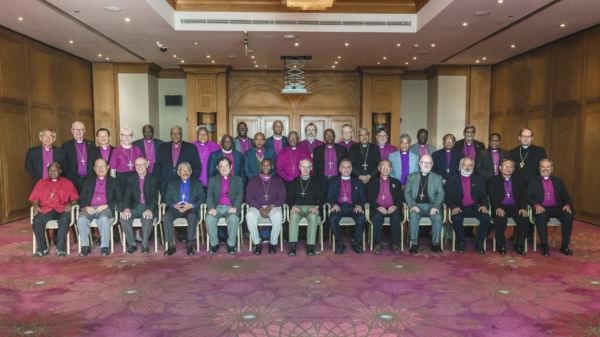 [Episcopal News Service] The heads of 33 of the Anglican Communion’s 40 provinces gathered last week in Jordan for the Primates Meeting, with The Episcopal Church’s Presiding Bishop Michael Curry among those seeing opportunities to look beyond the provinces’ theological divisions amid preparations for this summer’s Lambeth Conference.

“It was a really good meeting. For example, at the end we went to the baptismal site of Jesus and St. John the Baptist and renewed our baptismal vows together and had Eucharist together; it was a harmonious and respectful group of people that love and respect each other,” Curry said in a phone call with Episcopal News Service. He and the other primates also met with Jordan’s king and learned about religious persecution in the Middle East.

Additional coverage of the Primates Meeting can be found here.

Archbishop of Canterbury Justin Welby, in a Jan. 15 news conference at the close of the meeting, described the meeting as the most “constructive and creative” of the three he’s attended, with “a real sense of people seeking to walk together, to build the life of the church and to look outwards.”

“There’s been a real sense of the presence of God … in the meeting as we’ve gone through some of the obvious difficult issues that arise when you have people representing provinces that cover 165 countries, 2,000 languages or more,” Welby said.

The primates attending the Jan. 13-15 meeting in Jordan included 12 new primates. The provinces in Rwanda, Uganda and Nigeria declined to send representatives over theological differences related to sexuality. Four other provinces weren’t represented, due to health, vacancy or other reasons.

The actions of the primates attending the meeting were outlined in a communiqué. The meeting was called principally to prepare for the 2020 Lambeth Conference, to be held from July 23 to Aug. 2 in Canterbury, England, during which at least 650 bishops and 506 spouses are scheduled to gather.

At last week’s meeting, the primates spent a full day listening to one another about challenges their countries are facing, like the rise of global nativism and sealing off of borders. They emphasized “the need to find a better way,” Curry said.

They also accepted a yet unpublished report from the Task Force on the Anglican Communion, a group convened after the 2016 Primates Meeting. The task force examined how Anglicans could walk together in the face of complex theological and cultural differences.

The report, Curry said, recognizes “that we have profound differences on human sexuality, but those of us there have committed to walking together as followers of Jesus.”

The primates have “come a long way since 2016,” Curry said. “I think that’s significant.”

The task force’s report “encouraged us all as a communion to be mutually repentant in any way that we have hurt each other,” he said. It also offered proposals about liturgy and guidance on how to handle disagreements in the future.

The task force’s report now goes to the Lambeth Conference and the Anglican Consultative Council, with the latter scheduled to meet next in 2022. The primates asked that churches across the communion set aside the fifth Sunday of Lent, March 29, as a day to focus on prayers of repentance produced by the task group.

Meeting in Canterbury in January 2016, a majority of Anglican primates voted to censure The Episcopal Church over its General Convention’s decision in 2015 to change canonical language that defined marriage as being between a man and a woman (Resolution A036) and to modify marriage rites to fit same-sex or opposite-sex couples (Resolution A054).

Rifts over sexuality have surfaced in the Anglican Communion before, but the current differences stem from two actions. In 2002, the Anglican Church of Canada’s Diocese of Westminster Synod approved blessings for couples in same-sex unions, and in 2003, The Episcopal Church elected and later consecrated New Hampshire Bishop Gene Robinson as the first openly gay, partnered bishop in the Anglican Communion. Robinson, who has since retired, was not invited to the 2008 Lambeth Conference by then-Archbishop of Canterbury Rowan Williams.

This year, Welby has invited the few openly gay and lesbian bishops, but he did not extend the invitation to their spouses. That exclusion drew objections from many bishops of The Episcopal Church, two of whom have spouses affected by Welby’s decision. Two additional Episcopal bishops with same-sex spouses are scheduled to be consecrated before the Lambeth Conference this summer.

How to respond to Welby’s exclusion of those spouses will be among the topics to be discussed in March at the House of Bishops meeting at Camp Allen in Navasota, Texas.