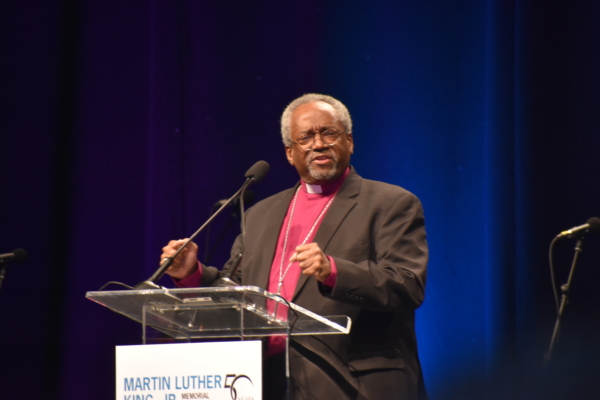 Several times, however, he jokingly reminded the audience of around 1,500 that he had been asked to give a keynote address, not a sermon.

“But imagine that it was a sermon,” he told the laughing audience before diving back into a reflection on the prophet Jeremiah.

Curry’s fiery speech, which drew parallels between the political injustices of Jeremiah’s age and present-day America, was the highlight of the event that traditionally draws appearances from Boston’s most influential leaders. The breakfast was founded by St. Cyprian’s Episcopal Church – a largely African American parish in Boston’s Roxbury neighborhood that features a stained-glass depiction of King – and Union United Methodist Church. The event’s proceeds benefit both churches’ community programs and services. This year, tickets for the breakfast – held at the Boston Convention and Exhibition Center – were sold out for the first time in about 30 years, organizers said.

The morning began with a prayer offered by Massachusetts Bishop Suffragan Gayle Harris. 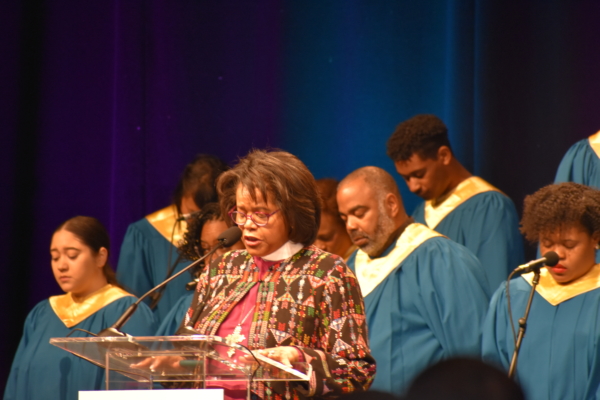 “We gather in what seems to be a weary year, with many silent tears from violence and war,” Harris said. “It seems at times the truth and our principles are under a guillotine of political expediency.”

Harris encouraged the audience to draw strength from King’s wisdom and tenacity in dark times.

“He reminded us that we cannot and must not remain in the valley of despair, hopelessness and helplessness,” she said.

After a performance from a gospel choir that had the audience clapping and singing along, Massachusetts Gov. Charlie Baker, U.S. Sen. Ed Markey, U.S. Rep. Ayanna Pressley and Boston Mayor Marty Walsh gathered on stage for a candid discussion about past and present manifestations of racial injustice in the state and the rest of the country. The consensus that emerged among the four politicians of different races and parties was that the specifics and semantics may be different now, but systemic racism persists, echoing the theme of this year’s event: “The Struggle Continues.”

“One of the things that frustrates me when we talk about the civil rights movement is that we bookend it as if we’re not still in it. The same is true when we talk about abolition. I’m still an abolitionist because my people still are not free,” Pressley – who is black – said to cheers from the audience.

When Curry took the stage to deliver his speech, he applauded the elected officials’ willingness to speak frankly about such difficult topics.

“It was wonderful to hear political leaders speak with a moral voice,” he said.

The central motif of Curry’s keynote address came from Jeremiah 17:8: a sturdy tree that endures drought by spreading its roots toward a stream. He recalled a tree he saw during a pilgrimage to Ghana with the descendants of American slaves and slave owners – a massive tree that, he was told, had stood for centuries. A witness to years of mass enslavement and colonialism, the tree continued to thrive.

“The tree, as large as it was above, was bigger below! It had a complex root system, a root system that spread out all over the land, a root system that was wide and inclusive,” Curry recalled enthusiastically. “If you want to navigate in moral ambiguity and complexity, when lies are substituted for truth, when misbehavior is exalted as just plain behavior, when people are treated like animals and put down, when mamas are separated from their children at the border of this country – you want to navigate that? You’ve got to be like that tree!”

Although he only mentioned President Donald Trump by name once, Curry talked about the actions of kings in the time of Jeremiah and let the audience fill in the blanks.

“Caring for those who have need was not their concern. In fact, they played political games on the level of geopolitics. They entered into unwise alliances. They canceled treaties that had long been in place. I’m just giving you a biblical lesson, now,” Curry said to laughter and applause. “They prepared to seal off the borders of Judah. Build imaginary walls. They segregated and separated people by their class and their caste. They separated folks, even in the house of God.”

The solution, as it was for Jeremiah and for King, is “a revival of relationships and a revolution of values,” Curry told the audience.

He ended with a nod to the slogan used by Trump and his supporters, bringing the crowd to its feet for a standing ovation.

“When love is behind every law, America will be great!”