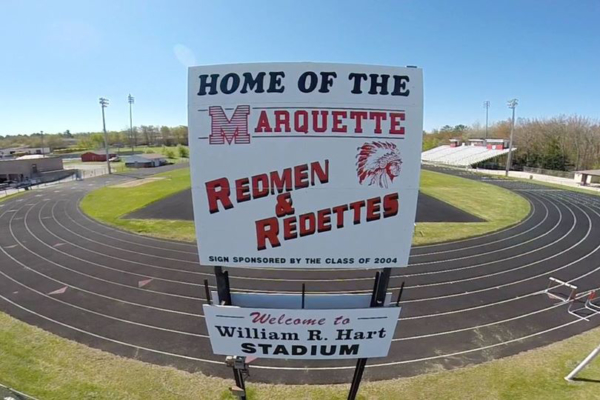 A photo shared to Marquette Area Public Schools’ Facebook page in 2015 shows a sign that features Marquette Senior High School’s nicknames and its former Indian chief logo. The logo has since been phased out.

[Episcopal News Service] Episcopalians in Michigan’s Upper Peninsula are joining calls for a local high school to change its nicknames, which many consider derogatory toward Native Americans.

Northern Michigan Bishop Rayford Ray wrote a letter Jan. 3 to the school board in Marquette calling for an end to the use of “Redmen” and “Redettes” at Marquette Senior High School, and the Rev. Lydia Kelsey Bucklin, Ray’s canon to the ordinary for discipleship and vitality, spoke in favor of changing the nicknames at a tense school board meeting on Jan. 6.

“The ‘Redmen’ and ‘Redette’ nicknames are not only hurtful to indigenous members of the community, but to all who believe in human dignity, freedom and justice,” Ray said in his letter. “We are called to recognize an injustice, to educate each other about the nature of this injustice and to follow the lead of local indigenous leaders who recognize how to heal this unnecessary trauma.”

Of the 12 federally recognized Native American tribes based in Michigan, five are in the state’s sparsely populated Upper Peninsula. Marquette, overlooking Lake Superior and home to Northern Michigan University, is the Upper Peninsula’s largest city, with a population of about 21,000, though only a few hundred Marquette residents report Native American heritage, according to census data.

Last year, the Marquette school board asked a special committee to research the high school’s nicknames. The committee collected evidence that the nicknames were offensive, harmful to Native American students and not universally embraced by the student body, and it recommended changing the nicknames.

“A change to a culturally appropriate nickname and mascot common across all seven schools within the Marquette Area Public Schools might serve as a rallying point and a point of pride,” the committee said in its report, presented to the school board on Dec. 16. 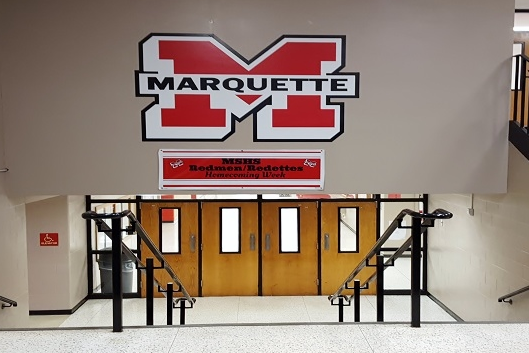 Dozens of people attended the board’s next meeting on Jan. 6, and they reportedly spoke for more than three hours, some defending the nicknames and others opposing them. Defenders argued that “Redmen” originated not as a racial slur but as a tribute to the crimson red of Harvard University, which was a former superintendent’s alma mater. Even so, the school long embraced the racial connotations of “Redmen” by featuring an Indian chief’s head as its logo, until that image was phased out a few years ago and replaced with a bold red “M.” Opponents say the nicknames need to be retired as well.

“For us, it really is just this basic recognition of the need to respect the dignity of every human being,” Bucklin told Episcopal News Service, referencing the baptismal covenant in the Book of Common Prayer.

Bucklin’s comments at the Jan. 6 school board meeting in opposition to the nicknames also were rooted in her personal history. The Diocese of Northern Michigan is based in Marquette, and Bucklin attended Marquette Senior High School in the 1990s, when her father, the Rev. James Kelsey, worked as the diocese’s ministry development coordinator. He later served as bishop until his death in 2007.

In 1998, during Bucklin’s senior year, she was editor of the student newspaper. She and her fellow students devoted one issue that year to questioning the appropriateness of the “Redmen” mascot and nickname.

That year, the school board voted to retire the logo, but the decision didn’t last long. A backlash in the community led to the election of new board members, Bucklin said, who voted to reverse course and keep the “Redmen” nickname and logo.

The ongoing debate in Marquette echoes conversations happening across the United States over Indian mascots. While some communities are reluctant to give up such mascots, critics argue they glorify racial stereotypes, objectify indigenous people and amount to a form of cultural identity theft by teams and fan bases that often are largely non-Native.

The most widely discussed case is that of the NFL’s Washington Redskins, whose owners have adamantly refused to stop using a racial slur as the team’s name despite protests and pressure from Native American groups and their supporters. Other professional teams have been somewhat responsive to such complaints. The Cleveland Indians baseball team, while keeping its name, chose after the 2018 season to retire as its mascot a Native American caricature known as “Chief Wahoo.”

Colleges generally have phased out references to Native Americans in their mascots and nicknames since a 2005 NCAA ban on the practice. The University of North Dakota in Grand Forks, for example, is now known as the Fighting Hawks after deciding to end the use of its Fighting Sioux nickname in 2012.

“Rather than honoring Native peoples, these caricatures and stereotypes contribute to a disregard for the personhood of Native peoples,” the National Congress of American Indians, an advocacy group, said in a 2013 report. “Widely consumed images of Native American stereotypes in commercial and educational environments slander, defame, and vilify Native peoples, Native cultures and tribal nations, and continue a legacy of racist and prejudiced attitudes.”

Such arguments also apply to American high schools, where mascots have commonly drawn on Native American imagery. A USA Today Network report on Wisconsin school mascots noted in 2018 that dozens of schools had eliminated Indian mascots since the 1980s, but 31 such mascots remained in the state.

A Capital News Service report in 2013 counted at least 63 high schools in the country that still call themselves “Redskins,” and one of those schools is Paw Paw High School in lower Michigan. Last year, the American Civil Liberties Union of Michigan filed a complaint over the school’s mascot, and the U.S. Department of Education is investigating, according to MLive.

The ACLU’s complaint warned that the use of the nickname was creating a “racially hostile educational environment.”

In 2017, a state senator from Detroit proposed legislation that would have banned racially insensitive mascots in Michigan, but the bill appears to have stalled after being referred to a Senate committee. 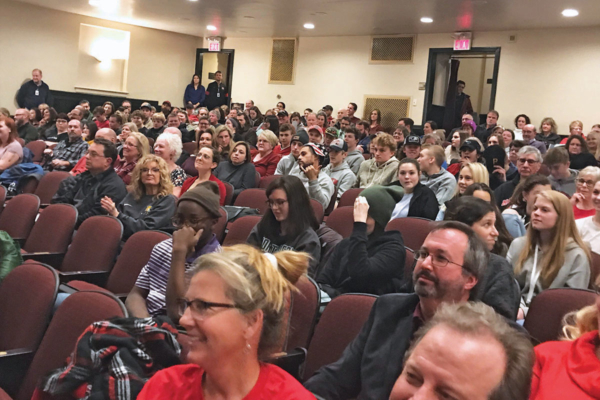 A crowd listens to people speak in favor of and against the proposed discontinued use of the Marquette Senior High School nicknames at a Jan. 6 school board meeting. Photo: Christie Bleck/Mining Journal

In Marquette, the school district’s student body is nearly 90 percent white, and only about 3 percent of Marquette Senior High School students reported Native American heritage, according to demographic data collected by the U.S. Department of Education.

After the research committee presented its findings at the school board’s Dec. 16 meeting, high school senior Roxy Sprowl was among those who spoke in favor of the committee’s recommendation of a new nickname, according to a Mining Journal story on the meeting.

The school board has yet to act on the committee’s recommendations. The issue wasn’t on the agenda of the Jan. 6 meeting, though residents flooded the meeting to comment about it anyway.

“I think that input is so incredibly important and we need to see and do what is best for our students, and I think this is a great opportunity as a community to really show what we stand for and to show how you can work on complex issues and resolve those issues,” School Board President Rich Rossway told WLUC-TV after the board’s Jan. 6 meeting. Its next scheduled meeting is Jan. 27.

Bucklin told ENS that the debate in Marquette comes at a time when the Diocese of Northern Michigan is stepping up its efforts to confront The Episcopal Church’s historic complicity with systematic oppression of Native American tribes. The diocese and its churches also have worked to build closer relationships with the tribes that are based in the Upper Peninsula.

In 2018, the diocese received a United Thank Offering grant of $30,000 for an initiative called “Walking Together: Finding Common Ground Through Racial Reconciliation.” The initiative entails “listening and learning sessions” with tribal members as well as a traveling exhibit focused on Native American history.

In listening to tribal members, Bucklin said, Episcopalians have learned firsthand of their opposition to Indian mascots and nicknames. “For this local issue [at Marquette Senior High School] to bubble up in the midst of all of that feels like it’s really appropriate for us to speak out in favor of changing the name.”