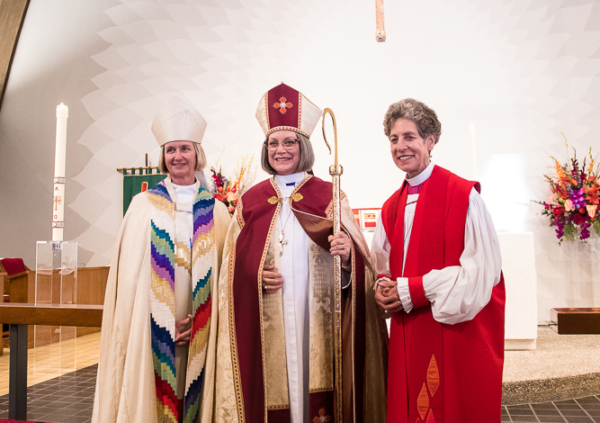 With that joyful cry, Presiding Bishop Michael Curry introduced the Rt. Rev. Lucinda Beth Ashby to a cheering crowd of nearly 850 at St. Andrew’s Episcopal Church in Saratoga, California. Ashby was ordained and consecrated on Jan. 11 as the fourth bishop of the Diocese of El Camino Real, the second female bishop to succeed a female bishop in Episcopal Church history.

The service was held in English, Spanish and Tagalog, reflecting the diversity of the diocese that extends from Silicon Valley to lower San Luis Obispo County. Presiding Bishop Curry led the service as chief consecrator, while the sermon was preached by the Rev. John Kater, professor emeritus of ministry development at Church Divinity School of the Pacific in Berkeley, California. Following the service, a celebratory reception was held at St. Andrew’s.

The consecration service marked the close of Bishop Mary Gray-Reeves’ memorable and transformative 12-year era as bishop of the Diocese of El Camino Real, which celebrates its 40th anniversary in 2020. Gray-Reeves has been named the managing director of the College for Bishops.

More than 1,200 have viewed the consecration service, which was originally livestreamed. A series of viewing parties were also held with live Communion timed to match the events taking place at St. Andrew’s. The service can be viewed at the diocesan YouTube page here; photos and videos can be seen at El Camino Real’s Facebook, Instagram, and Twitter pages.

Ashby had previously served as canon to the ordinary in the Diocese of Idaho, a position she held since 2011. She was ordained in 2004 in the Diocese of Northern California, where she served as assistant rector at St. Martin’s in Davis and then rector at St. Matthew’s in Sacramento. In addition, she taught at Church Divinity School of the Pacific in Berkeley. Before ordination Ashby taught Spanish and music in grades 7-12 and was head of school for a private school in Sacramento. She also founded and built a school for Native Americans in Capay Valley, California. She and her husband Bob share two dogs, Charli and Sammi, as well as three grown children who live in California with their spouses.

The Diocese of El Camino Real was founded in 1980 and has approximately 10,000 members in 42 congregations spanning five counties.