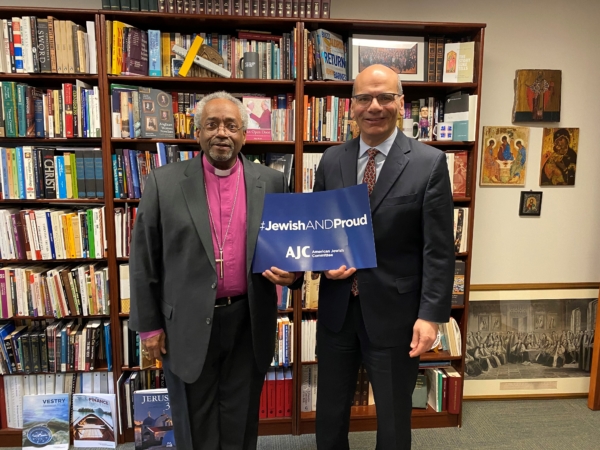 The Rt. Rev. Michael Curry, Presiding Bishop of The Episcopal Church, joins Rabbi Noam Marans, the American Jewish Committee’s director of interreligious and intergroup relations, on Jan. 6, 2020, as Jews around the world express their Jewish identity on #JewishandProud Day. Photo: Office of the Presiding Bishop

[Episcopal News Service] Amid a rash of attacks against American Jews in recent weeks – and a larger trend of violent anti-Semitism in America – Presiding Bishop Michael Curry is inviting Episcopalians to join him in supporting a social media visibility campaign and expressing solidarity with the Jewish people.

“On Jan. 6, Jews around the world are expressing their Jewish identity using #JewishandProud. I invite everyone who follows Jesus and his way of love to stand with our Jewish brothers, sisters and siblings,” Curry said in a statement to Episcopal News Service.

The AJC campaign is a response to the recent attacks, including the killing last month of four people at a kosher grocery store in Jersey City, New Jersey, and the stabbing last week of five people at a Hanukkah celebration in Monsey, New York.

But it’s also a reaction to the fear many American Jews are experiencing as more anti-Semitic hate crimes are reported. The number of hate crimes against Jews reported to the FBI jumped 40 percent between 2014 and 2018, and 2019 saw another large increase in anti-Semitic assaults. In an October survey of American Jews, AJC found that “31 percent avoid publicly wearing, carrying or displaying things that might help people identify them as Jews, and 25 percent avoid certain places, events or situations at least some of the time out of concern for their safety or comfort as Jews.”

“Enough is enough. We will not shy away from publicly displaying, celebrating our Jewish identity and faith,” said AJC CEO David Harris in an announcement for the campaign. “The most visible of our brethren, Jews who are easily identifiable because they proudly wear yarmulkes and traditional clothing, have become the number one targets, but if any Jew anywhere is attacked for being a Jew, we must all respond in total support and solidarity,” said Harris.

So, for #JewishandProud Day, AJC is encouraging Jews around the world to wear items of clothing that “exhibit [their] Jewishness publicly and proudly” – such as a kippah or anything with Hebrew or Jewish symbols on it – and post a photo to social media using the hashtag #JewishandProud, with a sentence or two explaining why they are proud to be Jewish. AJC also offers a sign that participants can print and display.

#JewishandProud Day is not only for Jews who want to express their pride, but also for non-Jews who wish to show solidarity. 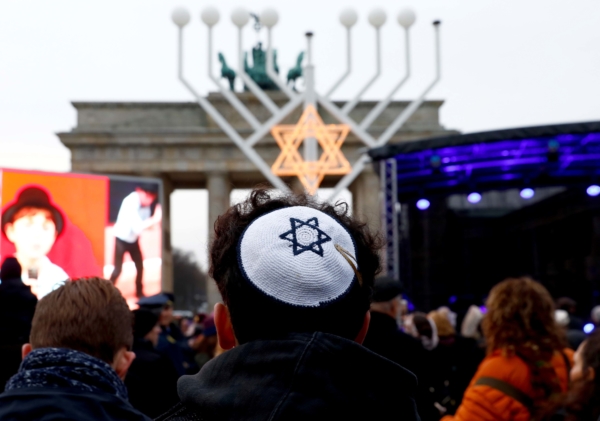 People wait to attend the illumination of a menorah in front of the Brandenburg Gate for the Jewish holiday of Hanukkah in Berlin, Germany, on Dec. 22, 2019. Photo: Michele Tantussi/Reuters

“People who are not Jewish also are encouraged to participate, posting photos and comments in support of the Jewish community in this perilous time, and sharing on AJC.org/jewish-and-proud what they will be doing in 2020 to support the Jewish community,” AJC wrote in its announcement.

Marans, AJC’s director of interreligious and intergroup relations, suggested some creative ways that non-Jews can use the hashtag:

“We cannot stand silent before this fresh outbreak of anti-Jewish terror,” the Episcopal bishops of Long Island wrote in a statement of solidarity with the Jewish community after the attack in Monsey. “We call on our fellow Episcopalians now to boost our own spiritual solidarity with our Jewish sisters and brothers. Anti-Semitism is a problem of special concern, not to be overlooked, to Episcopalians and all Christians. … Episcopalians should become a prayerful presence in the face of the fear and vulnerability created by these incidents threatening the Jewish community.”

Curry encouraged Episcopalians to participate in #JewishandProud Day and help counter the rhetoric of hatred with a Christian message of love and support.

“Acts of violence in religious settings are also acts of intimidation and fear,” Curry said. “An attack on one of us is an attack on all of us.”