[Episcopal Church in Connecticut] The Rt. Rev. Morgan Porteus, 11th bishop of the Episcopal Diocese of Connecticut, died peacefully on Dec. 15 at his home in Wellfleet, Cape Cod, Massachusetts, surrounded by his loving family. He was 102. 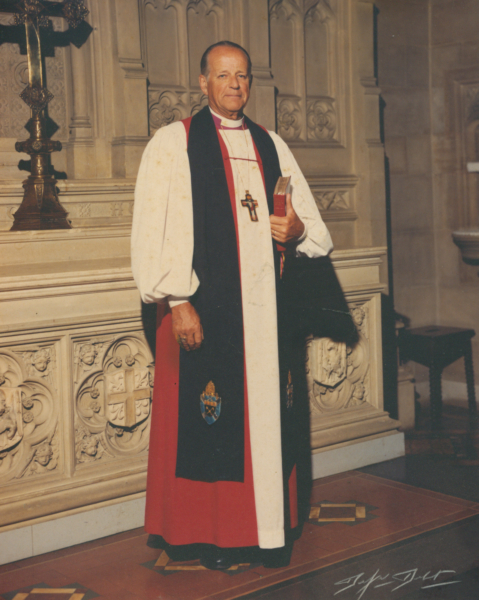 Porteus was ordained a deacon in 1943 and a priest in 1944 at Christ Church Cathedral in Hartford, where as a boy he sang in the choir. He considered the cathedral to be the heart of his life and ministry.

After serving as curate in 1943 at Trinity Church, Torrington, Connecticut, he accepted a call in 1944 to be rector of St. Peter’s Episcopal Church in Cheshire, Connecticut, where he served for 27 years.

In 1971, he was elected bishop suffragan in Connecticut and coadjutor bishop in 1976. In 1977 he was installed as the 11th bishop of the diocese at Christ Church Cathedral.

He served as a member of The Episcopal Church’s Standing Liturgical Commission for eight years until the 1979 Prayer Book was compiled and approved by General Convention.

He retired in 1981, moved to Cape Cod, and became an assisting bishop in the Diocese of Massachusetts, a position he held until 2009.

Porteus had three sons with his first wife, Martha A. Walsh of Lowell, Massachusetts, whom he married in 1944. After they divorced, he married Rev. Joan Cottrel in 1988, a marriage that also ended in divorce.

He was an avid fly fisherman, gardener and photographer with a deep love of Cape Cod and its natural beauty.