[Episcopal News Service] In fifth grade, most kids are focused on their friends, their favorite TV shows, pushing the limits of their parents’ authority and maybe a sport or two.

Dana Marsh was singing in the Washington National Cathedral in front of the president of the United States and the queen of England.

The year was 1976, and 11-year-old Marsh and his classmates from the renowned St. Thomas Choir School in New York had been invited, along with other choirs, to sing at a service celebrating the U.S. bicentennial attended by President Gerald Ford and Queen Elizabeth II. Marsh was the treble soloist.

Such is the kind of opportunity afforded to students at St. Thomas, the only boys’ choir boarding school in the U.S. and one of only three in the world. The school, which celebrates its 100th anniversary this year and is connected to St. Thomas Church on Fifth Avenue in Midtown Manhattan, enrolls boys from grades three through eight to study in a rigorous academic program and sing in the acclaimed St. Thomas Choir of Men and Boys.

That means the students’ experience is marked by intense and disciplined immersion in the rich Anglican choral tradition, singing at least five services a week in the church, as well as international tours, concerts with symphonies and unforgettable once-in-a-lifetime experiences. Thomas Carroll (class of 1988, and the son of a 1945 graduate) remembers singing the world premiere of Andrew Lloyd Webber’s Requiem Mass at St. Thomas Church in 1985 with Plácido Domingo and Sarah Brightman.

A few years later, he and some of his classmates went to The Hit Factory, the legendary New York recording studio, to record vocals with Carly Simon for “Let the River Run,” the song she had written for the movie “Working Girl” that went on to win an Oscar, a Golden Globe and a Grammy. To this day, he still gets royalty checks of about $5 every few months for that song.

Bishop Chip Stokes of New Jersey, who attended St. Thomas during the tumultuous late 1960s, recalls singing at a memorial service at St. John the Divine for Martin Luther King Jr. and at St. Patrick’s Cathedral while mourners were paying their respects to Robert F. Kennedy.

“Being in that place and being a part of that school during those experiences was pretty powerful,” Stokes told Episcopal News Service.

As St. Thomas celebrates a century of choral education, Stokes, Carroll, Marsh and other alumni shared with ENS their reflections on how the school shaped their lives. Though the school’s influence has manifested in different ways in the lives of its alumni, it can still be seen even decades later in the pursuit of excellence and the passion for music that unites them. 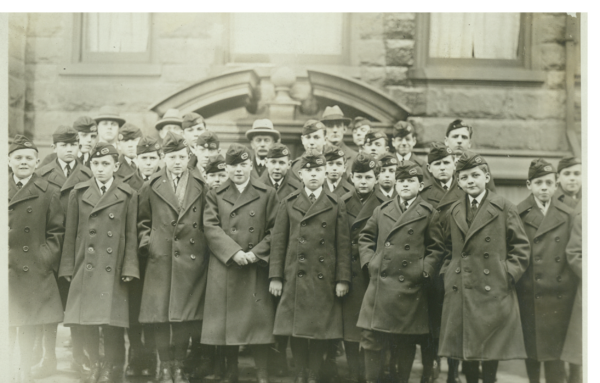 St. Thomas was founded in 1919 by the English-American organist and composer T. Tertius Noble to train a boy choir in the Anglican choral tradition for St. Thomas Church. Housed in a 15-story building several blocks from the church, the school now has about 30 students in grades three through eight; third-graders board Monday through Friday, while the rest of the students live at the school full time. Currently, students come from eight states and more than half are ethnic minorities. Following the English choral tradition, St. Thomas only enrolls boys, but since 2005, it has also hosted a nine-day choral workshop in sacred music for girls.

Sending a young child to a boarding school is often difficult at first, both for the students and their parents, said Victoria Vanasco, who is now the school’s admissions director but lives in Buffalo, New York. She first heard of St. Thomas from a friend who recommended it for her musically talented son, Quinn. 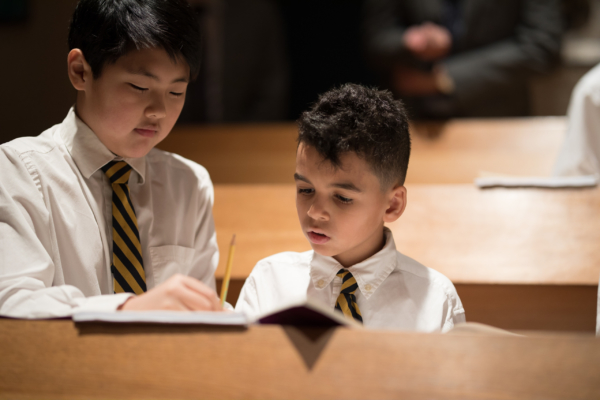 Students typically enroll at 8 or 9 years old. They have a demanding music education of vocal lessons, instrument lessons and six years of music theory, enabling them to sing an annual repertoire of nearly 400 songs at a professional level at services and concerts. Photo: Ira Lippke/St. Thomas Choir School

“The idea of sending my nine-year-old 400 miles away was not at the top of my list of things to do,” Vanasco said, but visiting the school sealed the deal. Her son wouldn’t just be going to school; he would get the chance “to do something that was meaningful and important in the larger world. And I think there’s so few opportunities for them to do that. And it’s life-changing.”

Homesickness is common at first, but it typically fades away once the boys settle into the routine and start to feel the sense of tight-knit community that alumni remember so fondly.

“The first few weeks, I was really homesick,” Carroll said. But soon enough, “St. Thomas was as much my home as my [family’s] home was, and I think that gives you a sense of belonging.”

“I was homesick going into Christmas,” Stokes remembered, “but when I walked into that church to sing the Christmas Eve service my first year, I didn’t want to be anywhere else, and that was December 1967, as a 10-year-old boy. And from then on, I never looked back.”

For Nathan Fletcher (class of 2007), coming from a small town in Connecticut, a highlight of the St. Thomas experience was exploring the city on Saturdays. Fletcher and his friends would ride the subway to Chinatown, see movies, “go to art exhibitions or museums – for me that was so cool … being in the middle of this amazing city, with so much going on.” 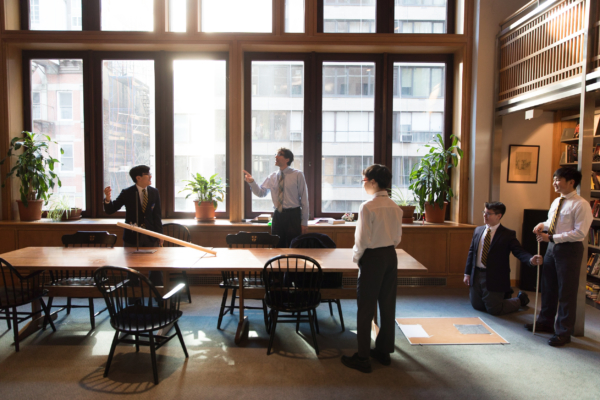 The tiny class sizes (the school has a 1:3 faculty-student ratio) and caliber of the teachers foster an atmosphere of academic excellence, Vanasco said. Teachers can personalize lessons based on needs and abilities instead of having one curriculum for everyone. The academic rigor is matched by the demanding but transformative choral program that teaches students the value of setting high standards and putting in the work to meet them.

“I think it took maybe a few years after St. Thomas to realize how high of a musical bar was set for all of us,” said Trevor Weston (class of 1981), who is now a composer and the chair of the Music Department at Drew University. “At St. Thomas, we were encouraged not just to do an OK job but to strive toward excellence. … We had an obligation to not just perform but perform well enough to actually move people.”

Fletcher, a freelance musician, composer and singer with a master’s degree in composition, learned from his time at St. Thomas how dedication can pay off. 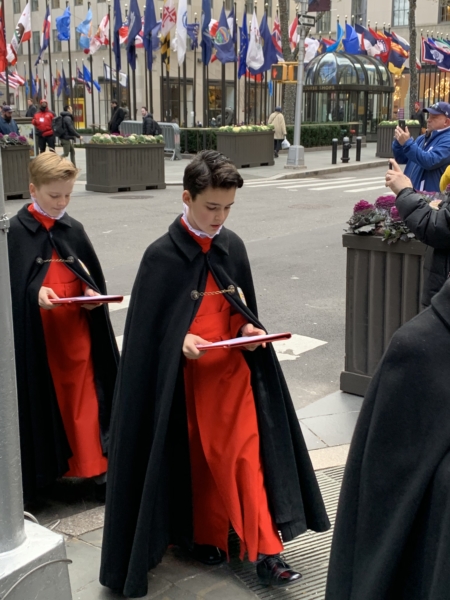 “If you think of music as being like a language, which I think it is, I think St. Thomas really is like a foreign language immersion school, but for music. … You end up gaining a kind of fluency in the language of music,” Fletcher said.

When alumni talk about the qualities in themselves that they attribute to St. Thomas, discipline is frequently mentioned – the kind of organization that allows creativity to flourish. It’s a skill that has helped Marsh in all areas of his life ever since.

“It was a great disciplining influence on me. At that point in my life, I did tend to get in trouble in school,” Marsh said. St. Thomas taught him the importance of “organizing one’s life, being on time for things, planning ahead, all those kinds of things that any community needs to coexist really [were] instilled in me [so] that it just became second nature.”

Being immersed in sacred music at an Episcopal school forms a powerful spiritual basis for the lives of many students, like Stokes, who came to know God through the mystical beauty of Anglican worship and music.

The careers these men have now are a testament to the lasting influence of St. Thomas on the boys who become young men there. Despite the disparity in the fields they’ve chosen, they all look back on St. Thomas as the crucible in which their passions were forged.

“It was an incredibly formative experience for me,” Stokes told ENS. “In terms of shaping my faith and my love of Christ and love of Christ’s church, that was a key piece for sure.”

After St. Thomas, Marsh got a bachelor’s degree in organ performance and a master’s and doctorate from Oxford and went on to have a career as a countertenor, conductor and music director in England and the U.S. He now chairs the historical performance program at the Indiana University Jacobs School of Music and is also the artistic director of the Washington Bach Consort. He spoke to ENS from Washington, D.C., where he was immersed in rehearsals for a presentation of Bach’s Christmas Oratorio.

“Without the experience of St. Thomas, very clearly, none of this would have happened,” Marsh said. “Everything, every direction that I have gone since, in every musical sense, was directed by that change in my life and going to St. Thomas.”

Carroll is a laryngeal surgeon at Brigham & Women’s Hospital in Boston and director of the B&W Voice Program, bringing his personal knowledge of vocal health to his work with singers and other patients.

“I operate on vocal cords all day, and obviously I got that interest from my interest in music and singing, which I carried through my entire life after St. Thomas,” he explained. “I got a degree in music from Oberlin College after high school and then went to medical school and realized there was this field out there that would allow me to combine a lot of my interests into taking care of people. So St. Thomas was ultimately a huge influence on my career choice.”

Weston said the music he studied and performed at St. Thomas “mesmerized” him and inspired him to write his own music. And the St. Thomas name still opened doors for him long after he had graduated; he was offered an organist job on the spot while practicing in a church after mentioning he had attended the school. Coming full circle, he received his first commission as a composer from the late Gerre Hancock, the beloved organist and choirmaster at St. Thomas from 1971 to 2004.

Fletcher, who has written operas on commission and is working on the intersection of opera and film, also feels the continuing influence of St. Thomas. Until recently, he returned to St. Thomas to sing as one of the gentlemen in the Men and Boys Choir.

“St. Thomas is a really special place and it’s very difficult to get away,” Fletcher told ENS. “The musical experiences are obviously totally formative in terms of who I am as a person. … They cemented in me a really deep appreciation for the power of music, to create experiences of transcendence.”