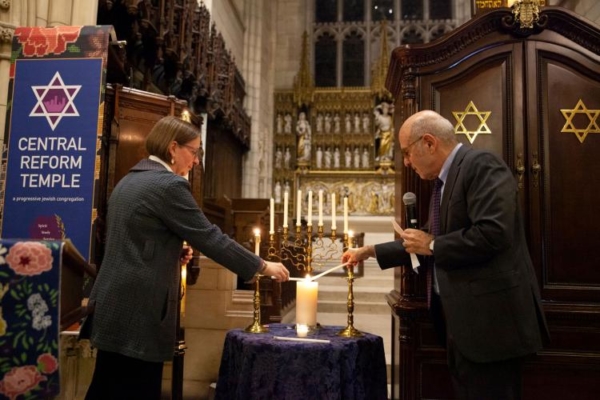 [Diocese of Massachusetts] As the Advent season anticipates Christmas, Emmanuel Church in Boston is preparing to fill its pews with people celebrating the birth of Christ. Central Reform Temple — a Jewish congregation that calls Emmanuel Church home — is preparing to fill those same pews with people celebrating Hanukkah, the Festival of Lights. During these services, members of the Emmanuel Church congregation will serve as ushers for the Central Reform Temple, and members of the temple’s congregation will serve as ushers for Emmanuel.

This interfaith family began when the previous rector of Emmanuel Church, the Rev. Bill Blaine-Wallace, met Rabbi Howard Berman while working together as part of the Religious Coalition for the Freedom to Marry in Massachusetts. In 2004, Berman had just co-founded a progressive Jewish congregation and it was in need of worship space, so Blaine-Wallace offered use of Emmanuel Church to the congregation, Boston Jewish Spirit, which would later become Central Reform Temple.

Since then, the two congregations have gone beyond sharing facilities to sharing their faith journeys together through collaborative programming, which they facilitate through the Emmanuel Center, the programmatic partnership of Central Reform Temple and Emmanuel Church.

Most recently, the two congregations collaborated with the Cathedral Church of St. Paul and Dar-Al Islam — which hosts Jum’ah Muslim Prayer in the cathedral each Friday — on the interfaith art exhibit “Abraham: Out of One, Many” that was on display at the cathedral until recently. Leaders from all four groups met regularly together as part of the interfaith planning team leading up to the exhibition’s opening in October.

The relationship between the congregations is expressed in unexpected ways, such as the presence of Emmanuel’s current rector, the Rev. Pam Werntz, at the altar during important Jewish services, as well as Berman’s role as rabbi-in-residence at Emmanuel Church, regularly preaching to the Sunday congregation. The ark containing the Torah scrolls is prominently housed at the front of the church; behind the altar is a carved screen depicting the Last Supper, as well as a large carving of Jesus with his arms open in welcome.

“From the beginning, we at the temple have felt that the church’s welcome to us was a very authentic one and an unconditional one, and we in turn were able to feel unconditionally at home within a very Christian worship space,” Berman said in an interview. “We’ve been able to process our own relationship to the spaces and the symbolisms in a very positive way, as have the Emmanuel members in terms of the presence of our Jewish symbols within the sanctuary.”

“I think what we’ve been able to do is to understand that the side-by-side visual impact of both symbols is not a syncretistic one, to use a theological term. It’s not a matter of eliminating the differences or blending them into one; they stand fully with their own integrity,” Berman said. “For us, we can understand and emphasize the historic Jewish context of the Christian symbolisms, and for Emmanuel, our symbols are inseparably part of their spiritual heritage anyway, so it’s seeing the fullness of the background and roots of their own Christian faith.”

Over the years, leaders from the congregations discussed the idea of a covenant statement that would document and preserve the unique relationship between the two congregations now and for the future.

A document had yet to be drafted when Werntz was traveling on her sabbatical in 2018 and landed in Vienna, Austria, to news of the shooting at the Tree of Life synagogue in Pittsburgh. During her sabbatical, Werntz had visited archaeological digs and museums and viewed evidence that testified to good relationships between Jews, Christians and Muslims on the Iberian Peninsula, and she found that the news of the Pittsburgh tragedy — coupled with her recent travels — stirred her to begin drafting a covenant.

“There was something about the trip and seeing the archaeological evidence of good relationships, while also knowing the history of the terrible things that, for the most part, Christians have done,” Werntz said. “I felt that there was an urgency to add to that body of evidence and to tell our story about the last 15 years.”

Upon her return, Werntz began drafting a document, and — after input from the leadership of both congregations — a covenant statement was finalized and signed this past July as a declaration of the two congregations’ commitment to a shared life together.

“As partners in a covenant relationship, each of our congregations is faithfully rooted in its distinct religious traditions and deeply committed to our shared spiritual roots,” the covenant reads. “We practice modeling compassionate encounters between Judaism and Christianity that affirm the difficult challenges of history and aspire to new levels of understanding.”

Berman emphasized that much of the Emmanuel-Central Reform Temple relationship is filtered through the lens of the current climates of the country and the world, with regard to the polarization and conflict between different communities.

“[The covenant] puts into sharp focus the alternative vision that what we’re doing offers, and I think to emphasize commonalities, to build on those, is a very important mandate for this period of time,” Berman said. “The main points of the covenant itself really raise up the issues of both being firmly grounded in our own respective traditions in a confident and secure way that enables us to be open to emphasizing the similarities and shared values and ideals; but also, being able to articulate and embrace the points of divergence and difference and be able to constructively, lovingly and respectfully discuss them.” 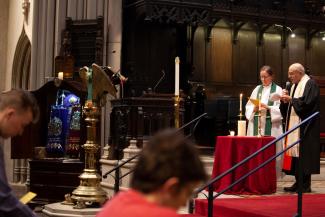 During the ceremony of affirmation at Emmanuel’s Sunday morning Eucharist on Nov. 17, the Jewish Ark containing the Torah scrolls was left open. Photo: Emmanuel Church

Over the weekend of Nov. 15-17, the two congregations held ceremonies of affirmation during the Friday evening Shabbat service and the Sunday morning Eucharist, to raise up and celebrate the covenant agreement. As part of the ceremony, leaders from both congregations read the covenant statement aloud and lit a unity candle together: Berman held a flame from one of the temple’s Shabbat candles and Werntz held a flame from Emmanuel’s Paschal candle, and they used their individual candles to light a single pillar candle, together.

“As these candles have combined to create greater light from two different sources, may our coming together in this sacred place, give light to all who come into this house in search of faith and love, justice and peace,” the congregations prayed during the ceremony. “May our life together here inspire us, and all who behold us, to work to kindle the light of compassion and hope in the midst of the darkness of our world.”

Both Berman and Werntz hope that their congregations’ covenant agreement can be used as a guideline for others who may want to enter into similar interfaith relationships.

“It’s just a really beautiful, gracious, grace-filled relationship and we want our light to shine beyond 15 Newbury Street,” Werntz said. “It’s the most rewarding thing that we in the congregation have done in the last 15 years, but to work across cultural and religious differences is very hard. It takes time and patience and understanding and goodwill — and it’s absolutely worth every minute of that work.”