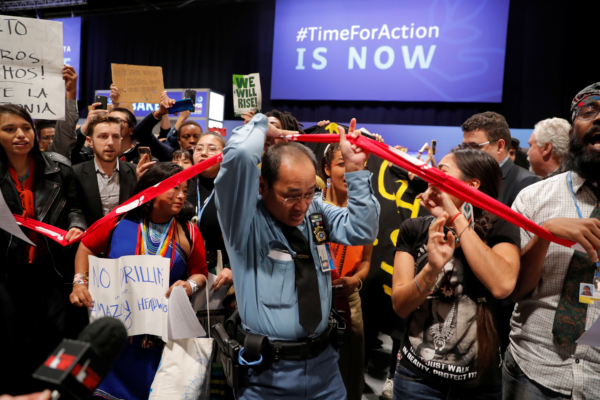 [Episcopal News Service] The United Nations Climate Change Conference known as COP 25 went into overtime, running two days later than scheduled, but ended on Dec. 16 without taking the actions scientists say are necessary to avoid a catastrophic future. The United States and other wealthy, high-emitting countries refused to implement carbon pricing or address the losses and damages that smaller, poorer states are suffering.

But while political leaders fell short of those goals, the delegation from The Episcopal Church and its interfaith allies showed the international community at COP 25 (the 25th Conference of the Parties) in Madrid, Spain, that the church remains committed to a swift and just transition away from fossil fuels and will continue pressing those in power to act.

“COP 25, meant by the [United Nations] to be a ‘COP of action,’ turned out to be a ‘COP of inaction’ … in the sense of protracted disagreement on many of the major issues related to carbon markets and how to reduce carbon emissions authentically and honestly,” said Lynnaia Main, The Episcopal Church’s representative to the U.N.

The conference had been seen by many as the last chance to amend current insufficient emissions commitments to limit global warming to 1.5 degrees Celsius above pre-industrial levels, beyond which humanity runs the risk of inflicting “increasingly severe and expensive impacts” on itself, according to the U.N.

But with crucial action points in the implementation of the 2015 Paris accord delayed until next year’s COP, “the point of no return is no longer over the horizon,” U.N. Secretary-General António Guterres warned as the conference drew to a close. “It is in sight and hurtling towards us.”

“This is the biggest disconnect between this process and what’s going on in the real world that I’ve seen,” Alden Meyer, the director of strategy and policy for the Union of Concerned Scientists who has been attending climate talks since 1991, told The Washington Post. “You have the science crystal [clear] on where we need to go. … It’s like we’re in a sealed vacuum chamber in here, and no one is perceiving what is happening out there — what the science says and what people are demanding.”

And what the science says is so dire it demands an urgent response, Main told Episcopal News Service.

“One stunning statistic I heard from [ex-U.N. Secretary-General] Ban Ki-Moon’s former speechwriter on the subject was that the decisions we make over the next 30 years will determine the outcome for the next 10,000 years,” Main said.

Despite the political inaction, the delegation representing Presiding Bishop Michael Curry offered a unique perspective at the conference, grounded in The Episcopal Church’s commitment to social justice and creation care — a perspective that is increasingly valued at these summits.

“We heard time and again, from U.N. officials and from other faith-based partners, that increasingly there is a recognition that climate change is a symptom not just of what is happening to the physical world, but of overconsumption, selfishness and apathy,” Main said. “U.N. officials are increasingly recognizing that at least part of the solution lies with faith leaders who can mobilize their communities through the teachings and actions required to generate this change.”

The delegation made a powerful impression, Main said, through its activities during the two-week summit, which included partnering with other faith groups for discussions and prayer services, hosting a booth to educate attendees about the links between climate justice and faith, and meeting with negotiators.

“The fact that The Episcopal Church shows up at a U.N. meeting speaks volumes to member state governments and U.N. officials; it shows that we care enough about the issue to physically show up in another country, for a long protracted period, and to invest resources and people in active participation,” she told ENS.

The delegation also educated national leaders and other representatives about how The Episcopal Church is setting an example by supporting the goals of the Paris agreement, reducing its carbon footprint, supporting indigenous peoples like the Gwich’in in their fight against oil and gas development on sensitive lands, coordinating the Creation Care Pledge, funding advocacy and mitigation work and much more.

In order to convince governments to act, it’s important to show that the church as an institution and Episcopalians as individuals are committed, Main said, “As we look ahead to COP 26 in Glasgow next November, we must ask ourselves how we, as faith-based actors, will undertake the self-examination and self-reform that this era requires of us. Jesus calls us to love our neighbor as ourselves. We cannot push our governments to do better, to do more, unless we too are demonstrating that we are still in.”