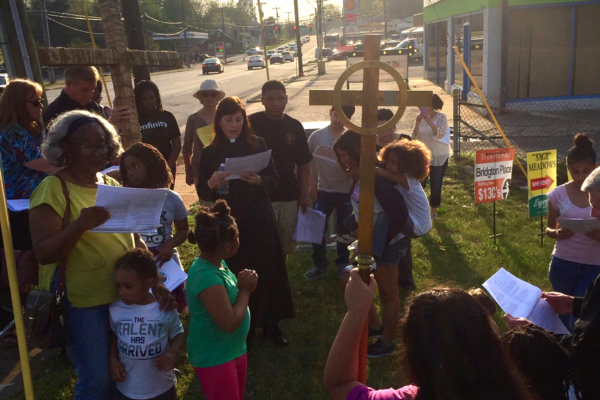 [Episcopal News Service] The Rev. Chantal McKinney has earned praise and churchwide support for her church-planting efforts in Winston-Salem, North Carolina, but the congregation she now leads in worship every Sunday as Christ’s Beloved Community didn’t sprout overnight. It started years ago with a lot of knocking on doors.

“I wanted to create a community that would be with people, not for people,” McKinney told Episcopal News Service. She modeled her approach to mission after the ways Jesus connected with people. “He wasn’t in the church. He was on the street meeting people where they were.”

And though Christ’s Beloved Community now draws several dozen worshippers to its weekly potluck lunch and Holy Eucharist on Sunday afternoons, getting people into the pews has always been less important to McKinney than connecting people with God.

“We want to be known for who we are and what we do during the week as much as on Sunday,” she said.

Christ’s Beloved Community also is intentional about breaking down a range of barriers. Its ministry is bilingual, aimed at bringing together members of the largely Latino community of its south-side neighborhood and their white and black English-speaking neighbors. The congregation is a joint Episcopal-Lutheran partnership that shares space with an active but aging Lutheran congregation. Overall, it emphasizes types of mission work that will “feed people physically and spiritually” while connecting people from diverse backgrounds who might not otherwise gather together in Jesus’ name.

“Christ’s Beloved Community and their founder, Chantal McKinney, bear witness to a model of neighborhood engagement and radical reconciliation that has become a beacon of inspiration to missional leaders across The Episcopal Church,” said the Rev. Katie Nakamura Rengers, The Episcopal Church’s interim staff officer for church planting infrastructure.

The church’s Task Force on Church Planting and Congregational Redevelopment awarded $100,000 to Christ’s Beloved Community during the last triennium, which ended in 2018. This year, the task force recommended and Executive Council approved a $40,000 “harvest” grant to further support McKinney as her ministry gains momentum.

“Chantal’s faith in the incarnate Gospel is clear through her ‘door knocking’ ministry, and her commitment to living the Gospel alongside people who don’t look like, act like or have the resources of the stereotypical Episcopalian,” Rengers said.

McKinney, whose mother is Mexican-American and whose white father was raised in Venezuela, studied at Virginia Theological Seminary and was ordained as a deacon in 2002 at age 24 and as a priest the following year. She spent the following decade in parish ministry in the Diocese of North Carolina during Presiding Bishop Michael Curry’s tenure as bishop of the diocese.

In conversations with Curry, McKinney explained that she was drawn to ministries involving the poor, and she wanted to take that service beyond her congregational work. “I want to be their priest. I want to be with them,” she said.

Curry gave her the flexibility to explore new approaches. She trained with a community organizer and, in 2014, began knocking on doors, meeting people one on one and learning about their lives and spiritual needs. Those rounds of door-knocking grew into what McKinney describes as a more robust street ministry.

A Diocese of North Carolina grant in 2015 helped McKinney expand the capacity of that work by hosting a two-day training in community organizing. A dozen lay members from churches around the city attended to learn ways, guided by scripture, of engaging with residents where they lived, from federally subsidized apartments to mobile home parks.

One of the things they learned was that many of the residents were new immigrants from Latin America who were from a Roman Catholic background but had not yet found a church in Winston-Salem. “There was a real opportunity to offer sacraments bilingually in this neighborhood,” McKinney said.

North Carolina Bishop Suffragan Anne Hodges-Copple for several years had been responsible for promoting new Episcopal ministries around the diocese, and after Curry was elected presiding bishop in 2015, Hodges-Copple, while leading the diocese as it searched for a new bishop, continued to support McKinney’s work. They began discussing ways of creating a new bilingual worshipping community on Winston-Salem’s south side.

“Our first thought was, how do we make sure that the Eucharist is being offered in a language and in a style that feels comfortable and accessible?” Hodges-Copple said in an interview with ENS.

Neither The Episcopal Church nor the Evangelical Lutheran Church in America had a large presence in the neighborhood at the time, McKinney said, but she soon connected with church-planting leaders from the ELCA’s North Carolina Synod who said they wanted to be a part of her growing ministry.

“We were already sort of dreaming of an opportunity to do ministry together,” said the Rev. Danielle DeNise, the North Carolina Synod’s director for evangelical mission. The synod also has church plants through partnerships with the Moravians and Methodists. “We’ve got to be in partnership in our mission development,” DeNise told ENS. “We can’t start any more churches on our own.”

The synod already had a small congregation in the neighborhood, Christ Lutheran Church, but its Sunday service had dwindled to just a handful of older worshippers. Closure wasn’t imminent, but it was inevitable, DeNise said. Lutheran Bishop Tim Smith met with the church members in 2016 and suggested a partnership with McKinney’s team that would allow the older congregation to leave a legacy after Christ Lutheran ceases to be a viable congregation.

That year, the two congregations signed a memo of understanding that gave McKinney use of Christ Lutheran as a physical home for Christ’s Beloved Community, which was endorsed by the synod as a federated Lutheran-Episcopal mission. A supply priest continues to lead Christ Lutheran’s worship services, to be held in the building as long as the congregation survives, after which the property will be deeded to Christ’s Beloved Community.

The synod also approved a grant of $100,000 for Christ’s Beloved Community, part of which was used to renovate the church buildings to be more welcoming to the new congregation, which officially moved into the space in July 2017. Christ’s Beloved Community created a food pantry and has offered after-school programs there. Neighbors helped build a new playground on the property. And in November 2018, the congregation began holding its own Sunday services. McKinney now estimates 85 to 90 people are connected to the congregation’s ministries and worship service in a typical week.

Christ Lutheran has had to adjust to the changes, but it has been a positive, collaborative experience, DeNise said. “We know that this is a way of God’s legacy continuing,” she said. “We know that everybody had to make sacrifices in the process, so I think there are some beautiful things about Christ Lutheran that we have to be giving thanks for.” 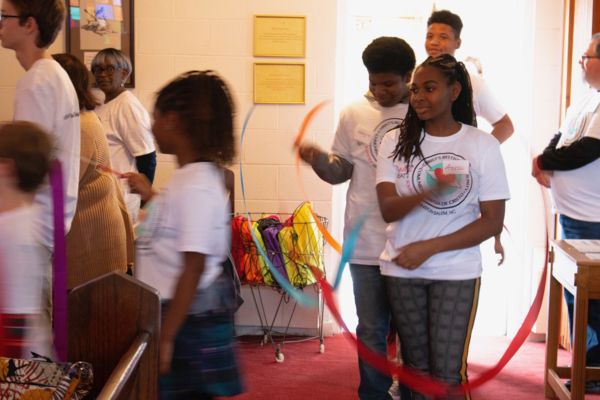 McKinney still sees Christ’s Beloved Community as a mission dedicated to ministry every day of the week, not just Sunday, but the permanent location has been useful for growing a worshipping community.

The potluck starts at 12:30 p.m. Sunday, and the Holy Eucharist follows at 1:30 p.m. The services tend to look and feel a little more Lutheran in the first half and a little more Episcopal during communion in the second half, McKinney said. She uses bilingual Bibles for the readings, rather than bulletin handouts, and real bread for communion.

“We’re trying to get back to basics,” she said, though the church also features a large screen where worshippers can follow along in English and Spanish while McKinney alternates between the two languages. The music includes Spanish-language and African American hymns, with tambourines and other instruments distributed to people in the pews.

On a good Sunday, attendance can top 40 people, though Hodges-Copple underscored that Sunday worship isn’t always the best metric for measuring the success of a ministry like Christ’s Beloved Community.

“It’s not the only way people are gathering in the presence of Jesus,” Hodges-Copple said.

She compared Christ’s Beloved Community to the depiction of Jesus on his walk to Emmaus in Luke 24. In that chapter, Jesus, unrecognized by his disciples, says little as he listens to them talking while they walk.

McKinney “did an amazing job for I think over a year of just listening, of just going into neighborhoods,” Hodges-Copple said, and that spirit still guides Christ’s Beloved Community as a congregation.