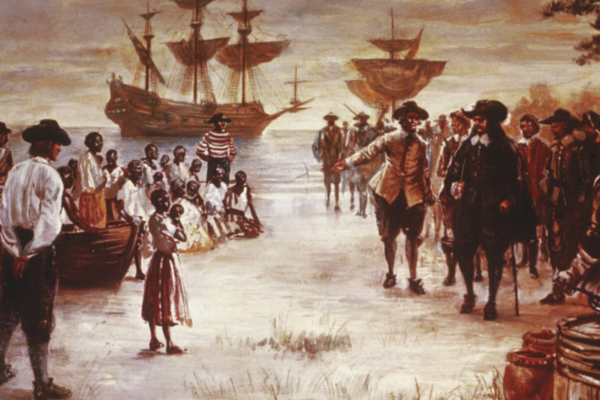 The enslaved Africans taken to Virginia in 1619 had been captured at sea by British privateers and sold for supplies at Point Comfort before most of them were brought inland to Jamestown. Photo: National Park Service

[Episcopal News Service] Following this year’s commemorations of the 1619 arrival of enslaved Africans to the Jamestown colony, there is at least one anniversary to come that is worth remembering for how it ties The Episcopal Church to the legacy of slavery.

Sometime in the first five years after those Africans were traded to the colony for food by an English pirate who had captured them on the high seas, the infant son of two of the original “20 and odd Negroes” was baptized in an Anglican church in the area, according to the colony’s 1624 census records. Those records say the son of “Antoney Negro and Isabell Negro” was baptized with the name of his family’s owner, William Tucker. It was the first documented baptism of an African baby in English North America.

Baby William’s baptism likely took place in the Anglican church near his master’s plantation on the Hampton River in an area where the Kecoughtan tribe lived. The church was known as Elizabeth City Parish, which is still active today as St. John’s Episcopal Church in Hampton, Virginia. 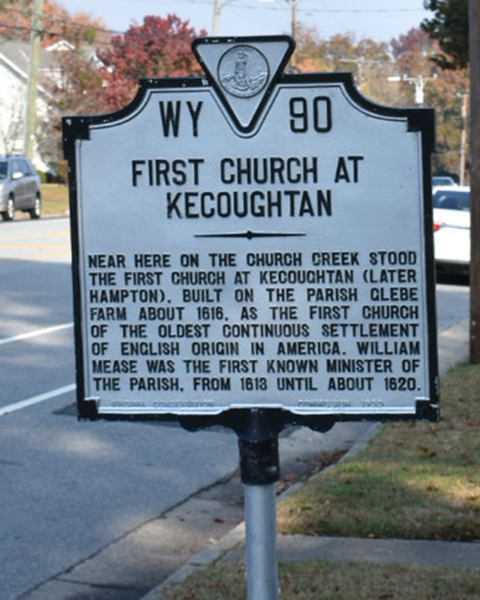 William Tucker’s baptism likely took place in the Anglican church near his master’s plantation on the Hampton River in what was then an area where the Kecoughtan tribe settled. Photo: David Paulsen/Episcopal News Service

The church’s willingness to perform such baptisms “tells me that sin is very real and that blindness is very real, and we can extend baptism, which is freedom offered us through the power of the Holy Spirit and at the same time, maintain and develop and make thrive a system of chattel slavery,” Diocese of Atlanta Bishop Robert Wright said in an interview with Episcopal News Service.

The sin of the church’s approval of and participation in slavery, Wright said, had its roots in Cape Coast on the western shore of Ghana, which was a nexus of the transatlantic slave trade. He recalled a March 2017 trip there during which he toured the dungeons where captured Africans were held before being forced onto ships bound for North America and the Caribbean.

Standing in those “dank, dark places,” Wright realized that “just above those dungeons was the Anglican chapel where people said basically the same words that we’re saying now in our Episcopal churches every Sunday.” It is believed that many Africans were forcibly baptized before they were taken to the Americas.

Baptism’s implications for slavery were later institutionalized in the law of the Virginia colony. Many Anglicans were members of the Virginia Assembly in 1667 when it declared that even if “by the charity and piety of their owners” slave children were baptized, “the conferring of baptisme doth not alter the condition of the person as to his bondage or freedome.” The law permitted the baptism of slaves and their children because it would help spread Christianity in the colony. The preamble of the legislation noted that the law was meant to free slave owners from any doubt about their baptized slaves’ status as property.

The U.S.-based Episcopal Church developed out of the Anglican Church in the 1780s after the British surrendered to the colonists at the end of the Revolutionary War.

Despite the sin that Wright sees in the church’s motivation for William Tucker’s baptism, he said he also finds “a lot of power” in a story that could help all Episcopalians understand that African Americans have been part of the church since the beginning, despite the discrimination they often face there. 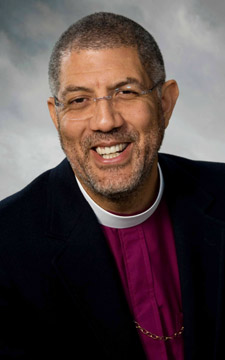 “So often in The Episcopal Church, African Americans can feel like guests, even though we have been members of this church since 1624. There’s something about William’s baptism that pops that bubble of feeling like a guest in your own home,” he said. “This has been our home – for better, for worse, for all of its blemishes and all of its blessings – this Episcopal Church has been our church from 1624.”

Wright said he wishes that white Episcopalians and those of color could know about William “and that [that] could somehow create more of a connection between us.”

In addition, acknowledging the church’s past sins can allow Episcopalians to posthumously confer the Baptismal Covenant’s promise of respect for the dignity of every human being, Wright said. “Even down the long hallway of time, what some of us are attempting to do with the memory of 1619 and going forward is to say that, despite what people did to black and brown people, you were here, you were a person made in God’s image and you had dignity, even if you were not treated that way at the time,” he said. “That’s a gift to give both to the dead and the living.”

The Episcopal Church has been reflecting on its Jamestown legacy since at least 2007, when the church marked the 400th anniversary of the 1607 establishment of the colony and the Anglican Church’s presence. “This place reeks with the origins of the slave trade in this land,” 26th Presiding Bishop Katharine Jefferts Schori said in June 2007 during a Eucharist marking the occasion. “That history is not yet fully redeemed, even though the church which sanctioned slavery was instrumental in its dismantling.”

The work to which Jefferts Schori called the church in 2007 continues. Today, the descendants of slaves and sharecroppers – including Presiding Bishop Michael Curry – and slave owners sit in the House of Bishops. They worship together in churches, some of which were built by slaves. Some seminarians and other students study on campuses built with slave labor and the financial fruits of the slave trade. One of them, Virginia Theological Seminary, has set aside $1.7 million for a slavery reparations fund.

Two dioceses, Long Island and New York, have pledged to set up reparations funds. Georgia Bishop Scott Benhase recently announced the creation of the St. Anna Alexander Center for Racial Reconciliation & Healing, contributing 3 percent of the diocesan endowment to the effort and calling on all endowed congregations to contribute at the same level. The Diocese of Maryland is continuing to study the issue of reparations.

This year The Episcopal Church joined with people across the country to remember the events of 1619. Such commemorations are important, the Rev. Charles Wynder Jr., staff officer for social justice and engagement, told ENS, because “we stand with our bodies as witness in these types of memories.” At least one more Episcopal Church commemoration at Jamestown is planned for next year.

Bishop Marc Andrus, of the San Francisco-based Diocese of California, told ENS that he traces his family’s roots in North America to Jamestown. Four hundred years ago, Thomas Andrus, a 12-year-old boy who might have been an orphan, was snatched off the streets of London, likely by members of a religious order. He arrived on a ship with about 99 other boys in 1620 and was forced into indentured servitude. Thomas Andrus survived Jamestown, but Andrus said about 70 percent of the boys who arrived with him died.

Thomas worked off his indenture and was freed. Within 100 years of Thomas’ arrival in Jamestown, his descendants had moved to Louisiana. By the early 19th century, they were prosperous rice buyers and brokers. The stigma of indenture and the poverty that the young Andrus experienced in 1620 and thereafter “was all erased and it would be as if it never happened.” It is a far different fate than that of the descendants of most if not all of those “20 and odd Negroes” who were forced to come to Virginia in 1619, Andrus noted.

The Episcopal Church must not forget its Jamestown legacy, Andrus said, urging Episcopalians to consider becoming what is called a culture of remembrance in Germany, where the Holocaust is remembered so that its horrors are not repeated.

The 2008 documentary “Traces of the Trade” is an example of Episcopalians trying to foster a memory culture, he said. In the film, Katrina Brown tells the story of her ancestors in the DeWolf family, the largest slave-trading family in U.S. history and also a prominent part of The Episcopal Church. James DeWolf Perry was The Episcopal Church’s 18th presiding bishop.

Prompted in part by the film and a 2006 General Convention resolution that urged dioceses to collect information on the church’s complicity in slavery, the subsequent history of segregation and discrimination, and the economic benefits the church derived from slavery, The Episcopal Church apologized for its role in slavery. 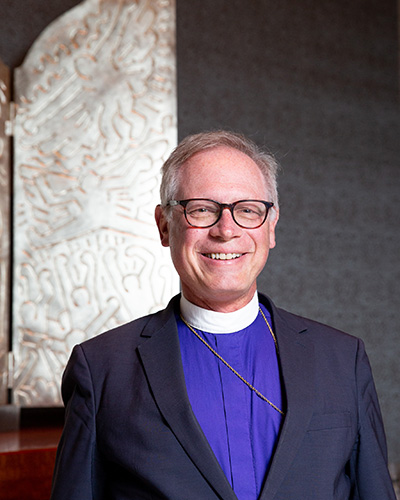 The effort to collect information has been uneven. For instance, Andrus said his diocese’s work “was not always smooth sailing; there were people who said that really doesn’t apply to us” because California was officially a free state. However, people persevered, he said, and the diocese reported its findings in 2012.

Andrus said he wonders if Episcopalians are really aware of the full picture of the church’s history with slavery.

“Would this be a good moment to revisit that work of memory recovery?” he asked. “And what further could we do?”