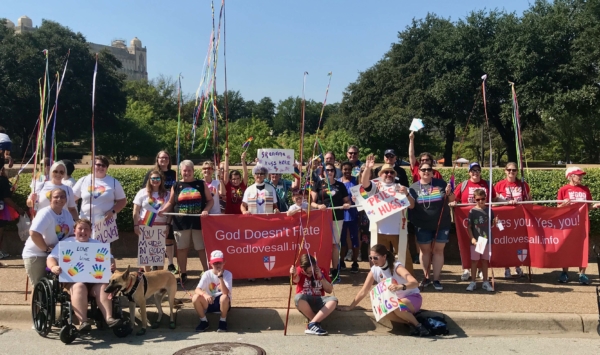 [Episcopal News Service] Slogans like “All are welcome!” and “God loves you – no exceptions!” are a common sight at Episcopal churches, but one diocese is expanding on those messages and making them more specific, targeting those who need to hear them most.

In October, the Diocese of Fort Worth in Texas launched an evangelism initiative “aimed at the unchurched, the dechurched, those wounded by the church, those who sometimes are told that God hates them,” with a website as its centerpiece: godlovesall.info.

“God doesn’t hate. God loves all,” it proclaims on its homepage, and its pages focus on topics associated with division and exclusion in American Christianity, with headings like “LGBT,” “Racial Justice” and “(Re)Marriage.” The pages explain The Episcopal Church’s views on these topics and what the church – especially the Diocese of Fort Worth – is doing to address them. The site also features video testimonials from clergy and parishioners with titles like “Women priests? Yes, women priests” and “Will God love me if I’m gay? Yes.”

The website is the brainchild of the Rev. Kevin Johnson, priest-in-charge at St. Alban’s Episcopal Church in Arlington, Texas. Disappointed by the negative and exclusionary forms of Christianity that garner so much of the public’s attention – especially in his region – Johnson decided to counter those messages with the Episcopal message of unconditional love and acceptance.

“I have become convinced, especially during my time in this particular parish, that The Episcopal Church has gifts that a lot of people in the world yearn to receive, but they don’t even know they exist, especially in our cultural context in north central Texas, which is very conservative,” Johnson told Episcopal News Service.

“There are too many people in our world who are being told right now that God sees them as an abomination or is ashamed of them in some way, that they have to change a core part of their being to be loved by God. … There are lots of people we’re talking to who have been chased out of their home by their parents because they’re gay or they’re transgender. Those are the people who desperately yearn to hear the good news that we carry. And that means having the courage to stand up and risk being vulnerable with that message.”

That message – “God doesn’t hate” – might seem innocuous, but it’s more controversial than one might expect, and that’s precisely why it was chosen as the theme of the website.

“We had to wrestle back and forth with this phrase a lot,” Johnson said. “But we finally decided to risk using the phrase ‘God does not hate you,’ which is really in your face for good-mannered Episcopalians.”

“We got a lot of pushback at that,” said Katie Sherrod, the diocese’s communications coordinator. “Episcopalians don’t say things like that, that bluntly. ‘God doesn’t hate!’ And rightly so, we all recoil from the word ‘hate.’ … But when that’s been actually said to you – ‘God hates you, God hates who and what you are’ – you hear that phrase, ‘God doesn’t hate,’ in a whole different way.”

“We’re all comfortable talking about God’s love,” Johnson added. “I mean, that’s just our cultural norm. But pointedly saying ‘God does not hate’ carries tangential messaging that directly counters a lot of the public messaging that gets put out over the airwaves in our region.”

And it seems hatred is increasingly less of an abstract concept and more of an action, making it all the more necessary to counter it with a message of love. Sherrod and Johnson have seen it firsthand.

“Texas has the highest rate of murdered transgender [people of any state], and Dallas is the epicenter of that,” Sherrod told ENS. “So we were seeing real life-and-death consequences to that message that God hates you. And then you have a man who drove from Dallas to El Paso to shoot immigrants, Hispanic people in a Walmart. We were being hit in the face with murderous results of that message that God hates you. And it just became more and more urgent for us to get this message there.”

Johnson wanted to reach people directly, especially people who might not want to walk into a church, so Johnson asked the diocese for funding to do marketing and outreach.

“At the local parish level, we’ve kind of test-driven the practice of raising community awareness about our values, practices and gifts in very purposeful, straight-up marketing ways. We’re really not afraid to say we have a good product that people want,” Johnson said.

Bishop J. Scott Mayer got on board, and it developed into a broader evangelism campaign, but “our main goal is not to get people in our pews,” Sherrod explained. “Our main goal is to show people how to have a closer relationship with God – hopefully in and through The Episcopal Church, but if that doesn’t happen, we’re fine with that. If they find God through anything we tell them, that’s fine with us.”

The website was completed in time for the Fort Worth Pride parade, at which a group from the diocese passed out cards with the URL. 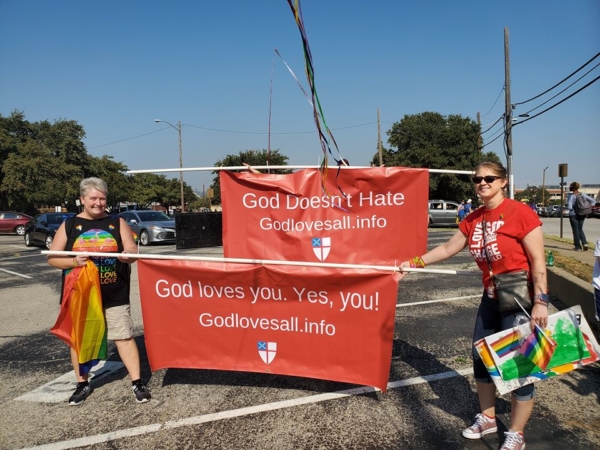 “As a road test, it was astonishingly successful,” Sherrod said. “People were very moved by that message.”

“We all got matching T-shirts that say ‘God doesn’t hate’ with the URL on it. We had banners, and then at the booth, we interacted with people … and that gave us the opportunity to talk and look people in the eye directly and give them a business card with the URL on it and just say, ‘Hey, you might want to go check this out,’” Johnson said.

Johnson and Sherrod said they’ve gotten vitriolic responses to the website from other Christians and some criticism from within their own diocese, although the diocese’s painful history has given its members some crucial perspective. Even its most traditional, conservative members know what it feels like to be rejected and excluded by the church. In 2008, a majority of clergy and lay leaders in the Diocese of Fort Worth voted to leave The Episcopal Church and join the Anglican Province of the Southern Cone over doctrinal differences on topics like same-sex marriage and the ordination of women. Now there are two entities calling themselves the Episcopal Diocese of Fort Worth: the original diocese associated with The Episcopal Church and the breakaway group that is now part of the Anglican Church in North America.

That breakaway group claimed some of the Episcopal diocese’s properties, including the original building of St. Alban’s, the parish in which Johnson grew up and which he now leads. The congregation has been worshipping in a theater ever since.

“The folks got kicked out of their church because they were, as I like to gently say, they were too spiritually generous,” Johnson said. “So we’re in this crazy context, which allows for risk and vulnerability.”

“A lot of people here know what the phrase ‘wounded by the church’ means because of the split we went through. So even very privileged white people in our pews have some sense of what that means,” Sherrod added.

For Johnson, the risk and vulnerability the diocese has experienced lend themselves well to evangelism and have made this campaign stand out.

“This was different because it really started out with a question that I’ve never seen [being asked], which is, What is God asking us to risk in order to better communicate our unique share of the good news to the community in which we live?”

One thing the diocese has risked by undertaking this campaign is discomfort among its more conservative members, but the bonds forged in the aftermath of the split have proven able to withstand that discomfort.

“There are still people uncomfortable with it,” Sherrod told ENS. “But they’re willing to live in that zone of discomfort. Because they get it. … We’ve had a lot of people here who’ve learned to be uncomfortable with stuff for the last 10 years. We have conservatives in our pews who have stayed with us even though they’re a little uncomfortable with some of the stuff the church is doing. But they feel loved in their parishes, and so they’re hanging in there.”

Aside from the kind of in-person advertising they did at the Pride parade, the diocese has been promoting the website through targeted Facebook ads and hopes to reach even further into the community with grant funding.

“As we move toward 2020, we’re thinking bigger,” Sherrod said. “I mean, why not? We’re hoping for billboards, for banners in downtown Fort Worth, … with movie screen ads, things like that, because we’re becoming increasingly confident that the place we’re sending them is a place that they will feel safe and comfortable being.”