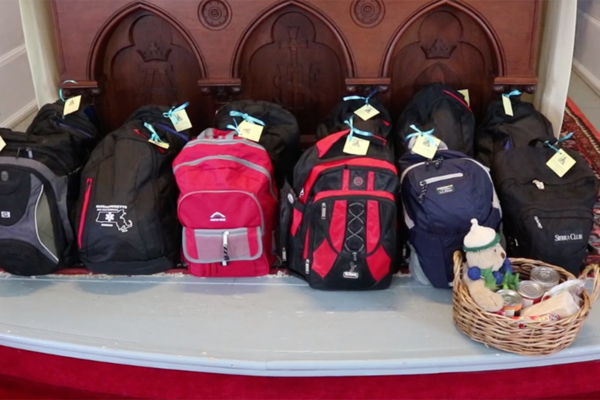 Backpacks filled with supplies await distribution to women being released from prison, part of the “Love in a Backpack” ministry of St. John’s Episcopal Church in Ashfield, Massachusetts. Photo: Diocese of Western Massachusetts, via video

[Episcopal News Service] A small Episcopal congregation in the Diocese of Western Massachusetts is helping female prisoners adjust to life back in the community after their release with backpacks full of supplies and expressions of support.

In three years, the “Love in a Backpack” ministry at St. John’s Episcopal Church in Ashfield has assembled and distributed more than 100 backpacks for women released from the Franklin County jail in Greenfield and a women’s prison in Chicopee. Organizers and volunteers hope to expand the ministry in the future as they enlist other churches and community partners to join in the effort.

Some of the women, after completing their sentences, are released with nothing to help them start rebuilding their lives, coordinator Mary Link told Episcopal News Service. The backpack “gives them something they can say is theirs,” though the personal connections sometimes are even more important than the physical items.

“It helps them in that scary moment when they’re going back out, that somebody somewhere has faith in them,” Link said.

St. John’s, with an average Sunday attendance just under 30, has long been active in organizing and supporting community ministries in Ashfield, a town of about 1,700 people. An initial grant from the Community Foundation of Western Massachusetts allowed the church to hire Link part time three years ago to coordinate those efforts, which included a drive to collect soap and paper products for a food pantry and outreach to low-income single mothers who may feel isolated living in the hill towns of Western Massachusetts.

The backpack ministry, meanwhile, continues to grow and flourish, with help this year from a $5,000 diocesan grant.

The seed for the ministry was planted a few years back when senior warden Susan Todd learned of the struggles of prisoners re-entering society, sometimes needing to start from scratch obtaining basic supplies like toothpaste and shampoo. A group from St. John’s visited the Western Massachusetts Regional Women’s Correctional Center in Chicopee to learn more.

“Our understanding was there were more services for men when they got out than for women,” Link said. “That may be changing, but certainly we’re making a difference in that.”

What started as an effort to assemble toiletry bags quickly grew to include a wide range of items, all stuffed into backpacks that could be easily taken home by the newly released women. Members of the congregation donate some of the items, and Link buys additional supplies as needed: personal care items, snacks, socks, a Bible, a stuffed animal or doll, poems, prayers, a journal and pens.

Volunteers meet about three times a year to fill the packs for distribution, and “no two backpacks are ever the same exactly,” Link said.

The congregation takes special interest in the “reading, writing and reflection” components, Link said, and each pack includes a personalized note – often written by a 90-year-old woman from the congregation who finds it hard to leave her home but enjoys contributing messages of hope and support to the backpacks’ recipients.

“These are women who’ve had a lot of trauma in their lives, a lot of chaos, a lot of upheaval,” Sister Mary Quinn, a reentry coordinator at the Chicopee facility, said in a diocesan video about the backpack ministry. “A lot of them don’t have a safe place to go when they leave here. A lot of the women literally have nothing. So it’s a wonderful gift to them and blessing to them, but also for them to know that the community cares about them.”

Jen Brzezinski, the caseworker at the Franklin County jail, echoed Quinn’s comments in an interview with the Greenfield Recorder for its recent story about the ministry.

“There’s a huge need, and the women who receive one are so grateful,” Brzezinski said. “They don’t have a lot. They’re headed into the unknown, and that can be really scary.”

Before the backpacks are given to the jails for distribution, they are blessed at Sunday Eucharist – a profound moment for the congregation at St. John’s, the Rev. Vicki Ix, vicar at St. John’s, told ENS by email.

“Over time, we have been led deeper into the issues impacting women as they leave prison. Our eyes have been opened to the vulnerabilities of transition,” Ix said, adding that the congregation is planning a forum on the topic in March. “We hope each woman feels God’s love in a backpack, but equally important, we want to advocate for their place among us and for the systemic change needed to fully welcome them back.”

In most cases, the congregation never hears from those who receive the packs, though sometimes the women write notes of thanks, saying it was helpful “knowing somebody cared,” Link said.

Her goal in the coming year is to partner with enough businesses, schools, churches and other organizations to increase the ministry’s capacity so that it can fill about 80 backpacks a year, based on jail officials’ estimates for the number of women in greatest need of that assistance.

“Love in a Backpack” is focused on the needs within the local community, but Link has a kit with information and a packing checklist that she distributes to churches and other organizations outside the immediate area to help them start their own backpack ministries.

As coordinator, Link’s work typically ranges from three to 10 hours a week, depending on what needs to get done. She described it as a “retirement job,” and while she brings her own faith to the work as a Quaker, not as an Episcopalian, the cause is one she finds personally and spiritually fulfilling.

“We’re all people of faith,” she said. “Even though I’m not an Episcopalian, it’s so wonderful to be able to work with other people of faith … doing things out of a sense of mission and faithfulness.”