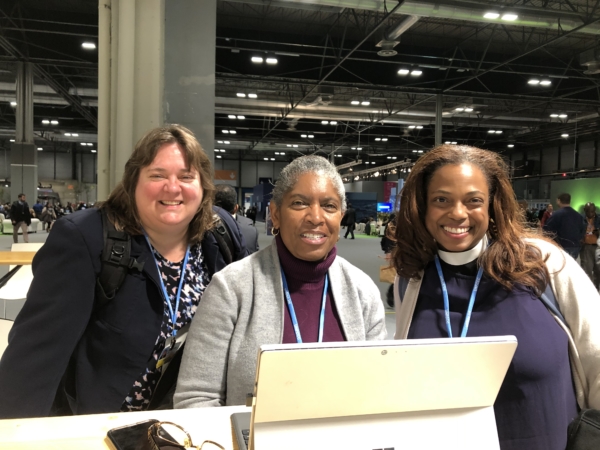 [Episcopal News Service] As the impacts of the climate crisis become more dire with each passing year and the catastrophic future scientists predicted decades ago inches closer to reality, governments have still not taken the actions necessary to protect humanity. Instead of declining, emissions of greenhouse gases have been increasing. And while nations are being warned that the commitments they have already made – such as the Paris Accord – are not enough to ensure a livable future and must do more, the Trump administration has chosen to abandon that agreement.

It is a bleak backdrop for the United Nations Climate Conference, known as COP 25, being held Dec. 2-13 in Madrid, Spain. But a delegation of Episcopalians representing Presiding Bishop Michael Curry is bringing a Christian perspective to the summit, grounded in hope yet committed to substantive action. They are in Spain to share the church’s views on the sanctity of creation and humanity’s moral duty to care for it, as well as the dangers facing the world’s poorest and most vulnerable people.

The delegation’s objective is “to build relationships – and to do lots of listening, praying and meeting with global leaders because of our commitment to God’s justice and sustained vision for the earth,” said the Rev. Melanie Mullen, the church’s director of reconciliation, justice and creation care. “We are not alone as religious bodies in this forum – along with ecumenical partners, Episcopalians are expressing our commitment to living a public faith and witness in the world.”

COP 25, or the 25th Conference of the Parties, is critically important because it is seen by many as the last chance to amend the current insufficient emissions commitments to limit global warming to 1.5 degrees Celsius above pre-industrial levels. The U.N. has established that benchmark as the recommended limit, beyond which humanity runs the risk of inflicting “increasingly severe and expensive impacts” on itself. Based on today’s commitments, emissions will be twice what they should be by 2030, missing the 1.5-degree target. Because so little action has been taken, emissions must now drop 7.6 percent every year between 2020 and 2030 in order to reach the target, which the U.N. says is “ambitious but still possible.”

“The overarching theme, which continues to remain uppermost on the agenda, is the need to ramp up ambition significantly, not only by member states but by all parties, including private sector, civil society and individuals,” Lynnaia Main, the church’s representative to the United Nations, told Episcopal News Service.

The presiding bishop has sent a delegation to each COP conference since COP 21 in 2015. This year, the delegation is headed by California Bishop Marc Andrus, an outspoken climate action advocate. Andrus suffered a stroke in October and is participating remotely from California. The team in Madrid consists of Main, Mullen and Jack Cobb, senior policy adviser in The Episcopal Church’s Office of Government Relations.

So far, the delegation has been busy forging new partnerships, Main told ENS, especially with ACT Alliance – a coalition of 156 churches and adjacent organizations working on humanitarian goals around the world.

“The Episcopal Church delegation has spent the past few days focusing on developing new partnerships and advocacy strategies with Anglican Alliance partners who are here – Archbishop Julio Murray and Dr. Elizabeth Perry – and for the first time has joined up with ACT Alliance’s ecumenical delegation which also includes the World Council of Churches and Lutheran World Federation. The Anglican Alliance also has been working with us on this partnership,” Main said by email.

“As a delegation, we are advocating for several priorities that link to our 2018 General Convention resolutions. Among these are accelerating ambition, increasing support for loss and damage, protecting human rights in addressing adaptation and mitigation and boosting financial resources and mechanisms. These priorities connect to our overarching goal of ensuring climate justice for the most vulnerable. After all, Jesus calls us most especially to care for the marginalized, and in U.N. terms there is a parallel principle at work: We speak of ‘leaving no one behind’ and ‘reaching the furthest behind first.’”

The delegation is not only urging political leaders to strengthen their policies. It is sharing the ways that The Episcopal Church has already acted to reduce its impact.

“We continue to be surprised and encouraged as national delegations at COP look to faith bodies as the place civil society nurtures hope and progress,” Mullen told ENS. “[The Episcopal Church] is already doing many kinds of important local climate work. For instance, the General Convention mandates funding creation care ministries are exactly what government negotiators mean when they talk about local-level ‘ambition’ and climate ‘mitigation efforts.’”

And joining forces with other faith organizations has strengthened the impact of The Episcopal Church’s efforts. On Dec. 2, the delegation and its ecumenical allies held a prayer service on the theme of “Praying For Climate Justice”:

Partnerships like these, Mullen said, magnify the powerful message The Episcopal Church has to offer: that “a life-giving, liberating and loving vision for the world matters in addressing climate change.”