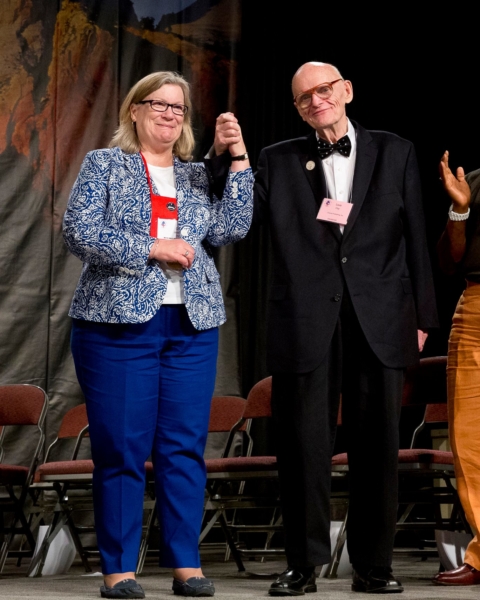 The Rev. Gay Clark Jennings and Louie Crew Clay at the Integrity Eucharist during the 2015 General Convention. Photo: Cynthia Black

[Episcopal News Service] Louie Crew Clay, a longtime advocate for the full inclusion of LGBTQ people in The Episcopal Church, the founder of Integrity and a former member of the House of Deputies, died on Nov. 27 at age 82 with his husband by his side, according to the Rev. Elizabeth Kaeton, a close friend.

Known commonly as Louie Crew, he is remembered across The Episcopal Church as a tireless trailblazer for sexual minorities and outcasts, a prolific author and a devoted husband and friend.

Crew was born Erman Louie Crew Jr. in Anniston, Alabama, on Dec. 9, 1936. Having earned a doctorate in English, he taught at preparatory schools and universities in the United States, England, Hong Kong and China throughout his career, most recently at Rutgers University until his retirement in 2002. In 1974, he married Ernest Clay, though the marriage was not legally recognized until 2013.

Also in 1974, while teaching in San Francisco, he called Grace Cathedral to ask if they could help him connect with other gay Episcopalians and heard “derisive laughter” in response. Determined to change the church’s attitude, in November of that year, he published the first edition of a newsletter called Integrity, a forum for gay and lesbian Episcopalians to connect, organize, express themselves and support each other.

“The Christian Gospel is for all persons,” he wrote in the first issue. “For too long has our beloved church neglected its historic mission to bring the Gospel to gay people. Instead, we have typically been treated as the lowest of God’s creation, too vile even to be mentionable. The hour has come for us gays to recognize that the only gift that our church has to offer us is the all-precious grace of our Lord Jesus Christ.”

The newsletter rapidly grew into a national nonprofit organization dedicated to full inclusion of LGBTQ people in The Episcopal Church, with an official presence at every General Convention since 1977. Though it has experienced organizational turmoil in recent months, Integrity’s advocacy efforts are credited with securing the most significant victories for LGBTQ Episcopalians, including official support for their access to the sacraments of holy orders and marriage.

Crew also served six terms in the House of Deputies, representing the Diocese of Newark, and one term on Executive Council. He was a pioneer in using the internet to spread information throughout the church and beyond.

“Louie was social media before there was social media,” the Rev. Gay Clark Jennings, president of the House of Deputies, said at Integrity’s 40th anniversary celebration during the 2015 General Convention. 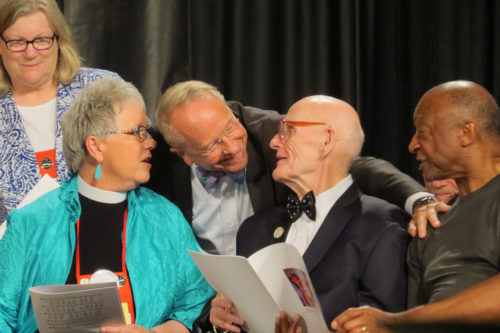 Crew served on numerous boards, committees and task forces, including the National Gay and Lesbian Task Force, General Convention’s Committee on Social and Urban Affairs and Standing Commission on Health and Human Affairs, and the Diocese of Newark’s Standing Committee.

A prolific essayist and poet, Crew documented over 2,600 publications of his work, including the 2015 anthology “Letters From Samaria: The Prose & Poetry of Louie Crew Clay.”

On social media, Crew was remembered as “a holy troublemaker,” “a great light,” “giant of justice” and a “gift to the church.”

“Louie changed the face of the church with his gentle spirit and fierce convictions,” Jennings wrote on Facebook. “He loved the Episcopal Church too much to let us stay the way we were. Thanks to his resilient witness, we are more just, more faithful and look more like the kingdom of God. On behalf of the House of Deputies, I extend my heartfelt condolences to Louie’s husband, Ernest, and to all who mourn.”

Funeral arrangements have not yet been announced.