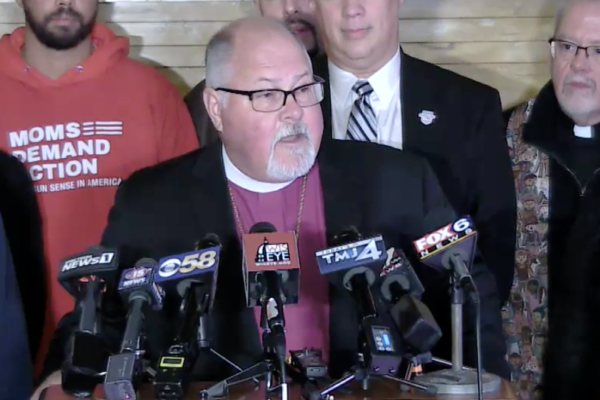 Gov. Tony Evers, a Democrat, had called the special legislative session for the Senate and Assembly, both controlled by Republicans, to consider measures that would implement universal background checks for gun purchases and a “red flag” system allowing judges to approve the temporary seizure of guns from individuals suspected of posing threats to the public.

He and other advocates of the bills point to the results of an August poll by the Marquette University Law School that found 80 percent of voters in the state support background checks for private gun purchases and gun show sales, and 81 percent back red flag laws.

“This government must take a vote. We deserve to know where our legislators stand on this issue since 80 percent of us support it,” Miller said. He spoke for about two minutes at the beginning of the 25-minute news conference, which was streamed online by WisconsinEye.

Republican leaders were required by law to convene a session on the legislation based on Evers’ request, but they were not required to act on it. Instead, the Assembly and the Senate each met Nov. 7 for mere seconds before adjourning.

“There’s just not any momentum in the caucus to take up either one of the bills that the governor has offered,” Senate Majority Leader Scott Fitzgerald told reporters, according to the Milwaukee Journal Sentinel.

The Episcopal Church has for decades advocated stricter regulations on gun ownership and improved gun safety. General Convention’s most recent actions, in 2018, included a call for greater study of gun violence as a public health crisis. Another resolution paved the way for the church to buy stocks in gun manufacturers to implement new shareholder advocacy strategies.

Bishops United, a network of about 80 Episcopal bishops, also has pressed for federal legislation. Some of the bishops traveled to Washington, D.C., in February to meet with lawmakers on the issue. While they were on Capitol Hill, the Democrat-led House passed a background check bill that has since languished in the Republican-controlled Senate.

Miller did not participate in those lawmaker visits earlier this year, but he has been active in Bishops United since the network was created in the wake of the December 2012 massacre of 26 children and educators at Sandy Hook Elementary School in Newtown, Connecticut. Two other deadly shootings had occurred months earlier in suburban Milwaukee, at the Sikh Temple of Wisconsin in Oak Creek and at the Azana Salon & Spa in Brookfield.

In a radio interview Nov. 7 before the news conference, Miller cited the salon shooting in October 2012 as a grim example of the need for a more comprehensive background check law. In that attack, the shooter killed his wife, two of her coworkers and himself with a gun he had purchased in an online sale after being turned away by a gun store.

Miller also highlighted the rising problem of suicide by firearm, especially in rural Wisconsin. The proposed legislation, he said, promises to help alleviate that strain of gun violence, which claims hundreds of lives in the state each year.

“This is an opportunity to care for one another, I think, in a significant way,” Miller told the Between the Lines show. “We know that these laws will save lives, and I don’t know why an elected representative would not want to save the lives of his or her citizens.”