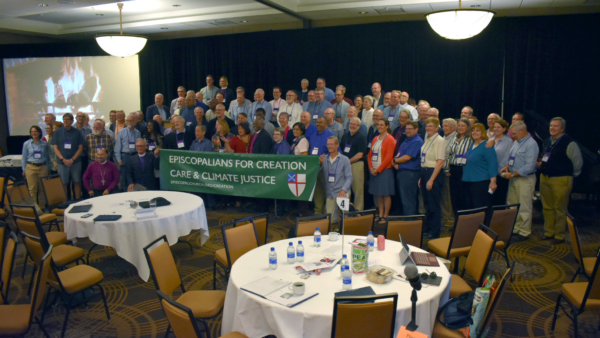 Members of the House of Bishops pose for a photo on Sept. 20, the final day of their fall meeting in Minneapolis, Minnesota, behind a banner supporting creation care. Photo: David Paulsen/Episcopal News Service

[Episcopal News Service] The Trump administration announced on Nov. 4 that it would withdraw the United States from the global climate pact known as the “Paris agreement” within a year, but that won’t affect The Episcopal Church’s commitment to the agreement’s goal of stopping or slowing climate change.

“The Episcopal Church considers climate action part of fulfilling a sacred trust from God,” California Bishop Marc Andrus said in a written statement reacting to the Trump administration’s plan to withdraw, which he called “an irresponsible move that particularly threatens some of the world’s most vulnerable populations.”

Andrus, who has led Episcopal delegations in recent years to annual climate summits hosted by the United Nations, warned that delays in addressing climate change could produce catastrophic scenarios in both the short and long term. The hardest-hit communities “will continue to suffer the tragic effects of wildfires, sea level rise, heat waves, and other climate-related disasters,” he wrote.

An Episcopal delegation was in Paris, France, in December 2015 to make a spiritual case for climate action during the 21st Conference of the Parties to the United Nations Framework Convention on Climate Change, or COP. At that conference, member countries, including the United States, reached a landmark agreement to set voluntary goals aimed at keeping global warming well below 2 degrees Celsius, which scientists think would be necessary to prevent a spiraling catastrophe of melting glaciers, rising sea levels and related weather extremes.

The COP23 summit in 2017 was intended to build on the Paris agreement, but the agreement’s effectiveness was thrown into doubt when President Donald Trump said he would withdraw from the accord rather than hold the United States to its pledge to dramatically reduce its greenhouse gas emissions.

The Episcopal Church responded by joining the We Are Still In movement, a coalition of faith partners, governments, nongovernmental organizations and companies committed to continuing to work toward the Paris agreement’s goals.

Environmental justice is one of the church’s three main priorities, along with racial reconciliation and evangelism. Over the years, General Convention has passed numerous resolutions on the issue, whether supporting federal climate action or pledging to mitigate the church’s own impact on the environment.

In 2018, General Convention approved a resolution titled “Episcopalians Participating in Paris Climate Agreement” that called on Episcopalians and congregations to set examples “in the spirit of the Paris Climate Accord, by making intentional decisions about living lightly and gently on God’s good earth.”

Some of those individual decisions were collected by The Episcopal Church last spring through the church’s Creation Care Pledge, which coincided with Easter and Earth Day 2019. More than 1,000 people pledged to take steps to improve the environment and reduce their contributions to climate change. 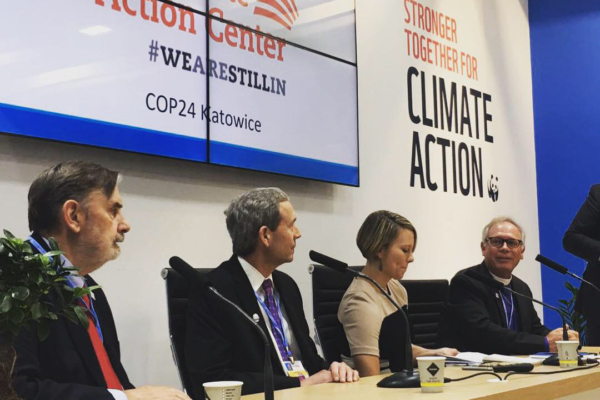 Andrus’ diocese also has taken the lead in developing the online Carbon Tracker for Episcopalians to record and visualize the impact of their efforts. The diocese has nearly completed development of the tracker, and more than 800 households have participated so far in the test phase.

“For us, climate action means commitment to personal and local community transformation, advocacy for the best climate and environmental policies, and standing with those who are already experiencing the deep pain of climate-related displacement and loss,” Andrus said.

In 2016, The Episcopal Church was granted U.N. observer status, which allows members of the delegation to brief U.N. representatives on The Episcopal Church’s General Convention climate resolutions and to attend meetings in the official zone. Most recently, Andrus led a delegation representing Presiding Bishop Michael Curry to the COP24 summit in December 2018 in Katowice, Poland.

The United Nations’ COP25 summit had been scheduled for Dec. 2-13 in Santiago, Chile, but the country was forced to withdraw as host because of civil unrest tied to Chilean student protests over rail fares. Instead, the summit will be held in Madrid, Spain.