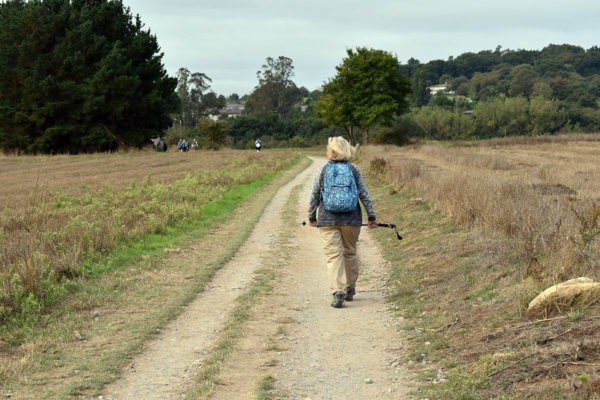 In October, 19 Episcopalians took part in United Thank Offering Pilgrims on the Camino, a pilgrimage organized by UTO and the Diocese of Northern Indiana to raise awareness for a proposed Anglican Pilgrim Centre in Santiago de Compostela, Spain. Photo: Lynette Wilson/Episcopal News Service

[Episcopal News Service – Santiago de Compostela, Spain] Dawn Baity shared stories, tears, laughter, meals and lodging with fellow pilgrims along her 32-day walk from Saint-Jean-Pied-de-Port in France to Santiago de Compostela in Spain, but when she arrived at St. James’ Cathedral in the heart of the medieval city and joined hundreds of fellow pilgrims for Mass, she couldn’t share in the Eucharist.

“You’re there at the cathedral and you’re hearing about all the countries represented by the pilgrims that arrived in Santiago that day and you’re all worshipping together in this absolutely beautiful Mass, and it’s a Mass of welcome. Then they get to Communion, and you are basically disinvited from the table,” said Baity, who finished her solo walk along the Camino de Santiago de Compostela’s popular 500-mile French Way on Nov. 1, 2018, All Saints’ Day. 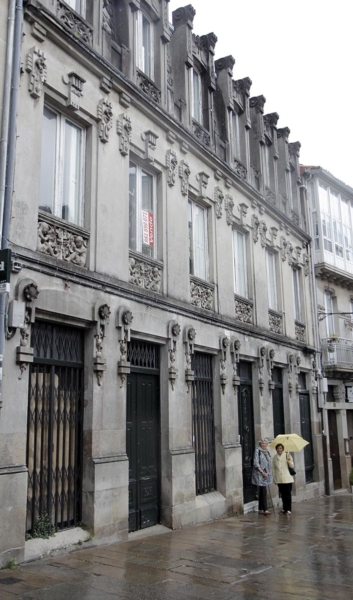 Nancy Mead, vice president of the board of the Friends of the Anglican Pilgrim Centre in Santiago, left, and Edie Morrill, right, the board’s treasurer, stand outside the three-story building proposed for the center, which is located just inside the old city directly on the route to the Cathedral of St. James. Photo: Lynette Wilson/Episcopal News Service

A year later, Baity has left her Chicago home and a full-time grant-writing position to become an Episcopal Church volunteer in mission serving the Spanish Reformed Episcopal Church, from its base in Madrid. Part of her job is to assist the Spanish church in its plan to build an Anglican Pilgrim Centre in Santiago de Compostela, a place where all pilgrims can share in the Eucharist and where women clergy can preside at the table.

“An Anglican center that’s ecumenical is an alternative where people can come and worship, continue that spirit of community and be invited to receive Communion; it’s the invitation that’s the important part,” said Baity, who is a member of Chicago’s St. James Cathedral. “The center is not designed to exclude anyone. It is truly a place of welcome for everyone.”

The Camino de Santiago de Compostela, or “the Way of St. James” is one of Christianity’s oldest networks of pilgrimage routes, stretching across Europe and converging at the tomb of St. James the Greater, known as the patron saint of Spain, as well as of pilgrims and laborers.

A dozen years ago, the Spanish Episcopal Church began receiving phone calls from pilgrims across the Anglican Communion and other Protestant churches who were asking for help with everything from lodging to replacing lost passports, said Bishop Carlos López Lozano, who was consecrated bishop of Spain in 1995.

“We discovered that thousands of youth pilgrims are from the Protestant churches and that they really need something,” he said, while seated in a café in Santiago de Compostela not far from the three-story building in mind for the Anglican Pilgrim Centre. “And we started to offer them spiritual support.

“In the Roman Catholic Church they are very clear that they do not give Communion to non-Roman Catholics,” López explained. “At the end of the pilgrims’ Mass at the cathedral in Santiago, in five languages – English, French, German, Spanish and Galician – they say, ‘Remember before you take Communion, you must go through confession and fast for two hours. If you are not Catholic, please do not take Communion because Communion is not for you.’” 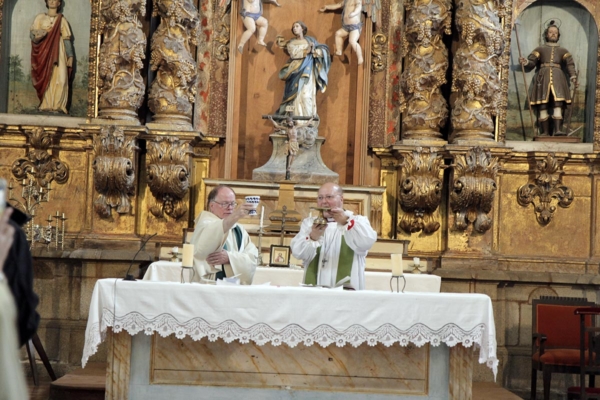 Last year, 327,378 pilgrims – the majority on foot and split 50-50 male and female – traveled the length of one route or some section of the Camino de Santiago. Forty-four percent were Spaniards, followed in order by large numbers of Italians, Germans and Americans and including another 173 nationalities, according to official statistics. 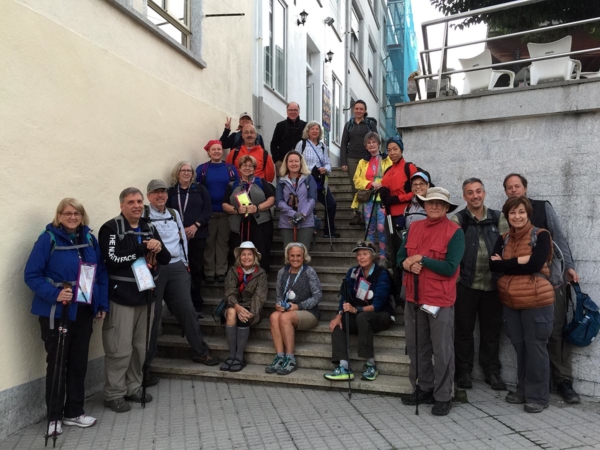 The United Thank Offering pilgrims pose for a group photo on the start of the third day.

The massive Cathedral of St. James – also called the Cathedral of Santiago de Compostela – normally hosts at least one pilgrims’ Mass daily, though as it undergoes a major restoration, the location and frequency have changed. And, given the archdiocese’s friendly relationship with López, it has offered the cathedral’s Chapel of St. Andrew to the Spanish Episcopal Church to hold its own Mass, López said. Still, so as not to offend, women cannot preside. But beyond that, the church found that pilgrims need at last two days after completing the walk to reflect on their spiritual journey.

“We were thinking there must be an Anglican place in Santiago de Compostela for pilgrims to give them the opportunity to have a safe space where they can stay for one or two days to reflect on their spiritual life at the end of the pilgrimage,” López said.

Four years ago, a group calling itself Friends of the Anglican Pilgrim Centre in Santiago began working alongside López to lay the groundwork for the center. This year, the United Thank Offering has joined the effort. UTO has set aside $60,000 in matching funds for the 2020 grant cycle. To date, $23,594 has been raised. The total cost for the center is estimated at $5 million.

In October, 31 Episcopalians traveled to Spain for a 10-day pilgrimage organized by UTO in coordination with the Episcopal Diocese of Northern Indiana through Corazon Travel.

Just after arrival, the larger group split into two: A dozen people traveled by bus with López to discover how UTO helped the church rebuild after the death of former Spanish dictator Francisco Franco, work that continues today. The second and larger group set off to walk the final 62 miles of the Camino from Sarria-Portomarín to Santiago de Compostela. 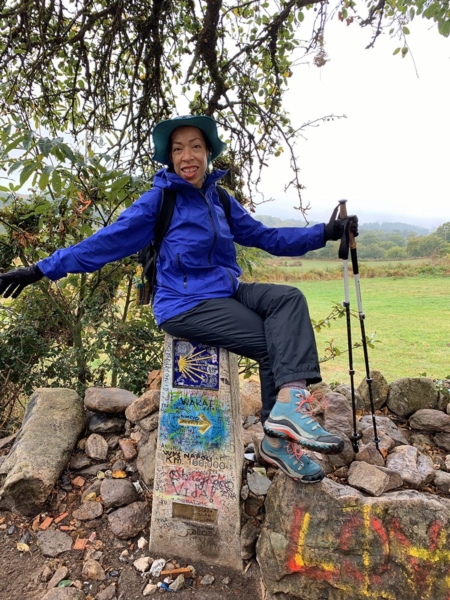 “One of the things on the Camino is you bring a stone that’s a symbol of a burden or sadness, and you leave it at the face of this cross … this whole idea of weight and shedding weight and leaving the sorrow,” said Mead, who serves as vice president of the Friends of the Anglican Pilgrim Centre in Santiago.

Not everyone can take a month or six weeks away from work and family to make a pilgrimage, and not everyone can do it alone or has the physical ability to walk the Camino in its entirety. For that reason, the UTO pilgrims set out to walk the last length of the journey as a group.

“We just became a community immediately with the older ones caring for the younger ones and the ones who could walk better cared for the ones who couldn’t,” said the Rev. Michelle Walker, UTO’s associate staff officer. “The pro to being in the group is the pleasure of having other people that you know, that you see along the way, that help you that encourage you, that you also get to help and encourage. The camaraderie, to be honest, got me out of bed on mornings when I just might not have because after the first couple days of walking, you feel it.” 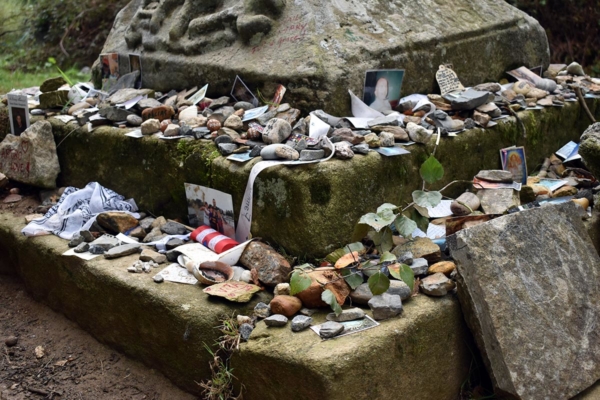 At the base of a tall stone cross on the Camino de Santiago near Palas de Rei, many pilgrims have left offerings of stones, flowers, acorns, photos, coins and cards, along with their wishes, dreams and prayers. Photo: Michael Donnoe

Along the way, Northern Indiana Bishop Douglas Sparks shared conversations with people about their lives, struggles and burdens. “It was an opportunity to listen, to walk along the road and say, ‘Gosh, you know, that’s happened in my life,’ or ‘That’s how God called me, or got my attention,’” he said. 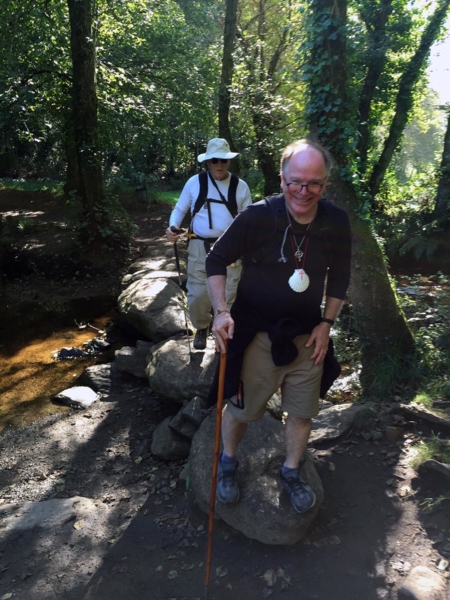 Sparks brought some of his own burdens and concerns, as well as those of the people he serves at home. He said the 62-mile walk was difficult, taking attention and focus, and that he spent a lot of time in thought and silent prayer.

“I decided I was going to pray the rosary every day for the people among whom I serve because the rhythm and pattern of walking is that rhythm and pattern of prayer,” said Sparks. “It was also a time I was thinking, you know, this is the way the Gospel was spread. … Jesus sent the apostles and they walked, and when they got to the ocean, they got on a boat and then they walked to the next place.

“And whether or not you believe in all the traditions and such, the reality is, the way the Gospel was spread throughout the world was through people walking.”

One of Jesus’ 12 disciples, St. James is said to have brought Christianity to the Iberian Peninsula following Jesus’ crucifixion. Later, upon his return to Judea in A.D. 44, he was beheaded by King Herod.

Religious pilgrimages have played a role in all religious traditions – Judaism, Islam, Hinduism, paganism – and in the Christian tradition dating back to the second and third centuries.

The day the Episcopal pilgrims arrived at Santiago, they paid a visit to the cathedral and joined the long line of visitors and pilgrims to touch St. James’ tomb, but it wasn’t until the following day that they worshipped together at the Church of Santa Susana, a Roman Catholic church in Alameda Park, and shared the Eucharist, again by special arrangement with the archdiocese. 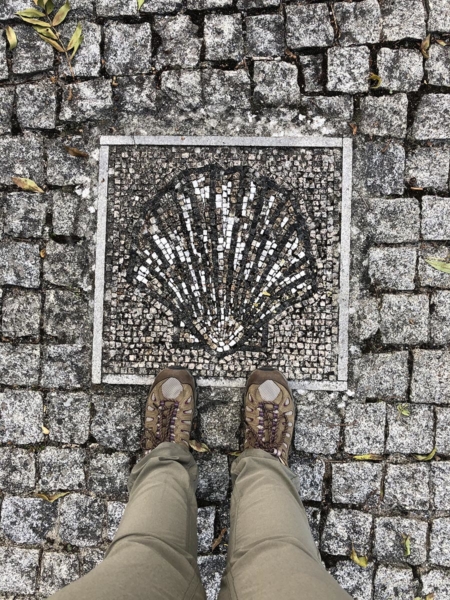 For Caitlyn Darnell, a UTO board member and a candidate for ordination in the Diocese of North Carolina, coming together at the table was an important part of the journey, akin to “laying one’s heart on the altar in joy.”

“Walking the Camino was so emotional in ways I don’t think I fully appreciated. … I can’t imagine having arrived here and not having the opportunity to take the Eucharist because walking a pilgrimage is a metaphor for what we’re doing on this earthly journey. We’re walking together, we’re struggling, but we’re holding each other in joy and in community as we’re pushing toward that heavenly city on the other side of this life,” said Darnell. “To not have the opportunity to give thanks for what Christ did so that we would have the opportunity to be with him on the other side … it seems absurd.”