[Diocese of Iowa] At the 167th Convention of the Diocese of Iowa, Bishop Alan Scarfe announced his intention to retire in September 2021 and called for the election of his successor in the spring of 2021.

In his letter to the diocese, Scarfe said, “Your gracious, patient and generous spirit has made me your bishop, always humbled and proud to be ‘the bishop of Iowa’ and never merely ‘from Iowa.’ To stand before General Convention in 2018 and describe your revivals was one of the greatest honors of my life. God only knows the sparks we have set alight through that witness. I am sure that some are saying, ‘Well, if Iowa can do it, so can we.’” 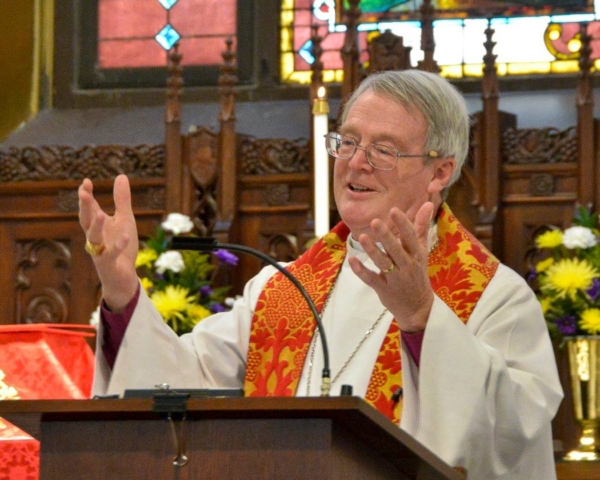 The bishop also announced that Bishop Todd Ousley, who leads The Episcopal Church’s Office for Pastoral Development, will be present at the November retreat of the board and will advise on the schedule for the search, election and transition periods. The Standing Committee and members of the diocesan staff will also be present at the gathering.

Scarfe was elected ninth bishop of the Diocese of Iowa at a special diocesan convention in November 2002. He was ordained in Des Moines on Saturday, April 5, 2003 and seated at St. Paul’s Cathedral the following day. The diocese had sought a “shared ministry” bishop, and Scarfe’s ministry in the diocese has included a focus on being “in mission with Christ, through each and all.”

He has been active in social justice issues through his involvement with Bishops United Against Gun Violence, support for the LGBTQ+ community and encouragement of the Becoming Beloved Community initiative development. In his time in the diocese, Scarfe has been an advocate for youth and young adult ministry and the development of new worshipping communities. In the last several years, he has gathered the diocese in over 40 revivals across the state and encouraged and supported congregations through Growing Iowa Leaders and Engaging All Disciples.

He says in his letter, “We have been called, fed and sent through revival and the subsequent years of growing Iowa leaders, and engaging each other in discipleship. My prayer is to leave you walking your neighborhoods and building relationships of love with all around you, satisfied more to fulfill the actions of Christ, rather than settle with mere Christ-like thoughts and feelings.”