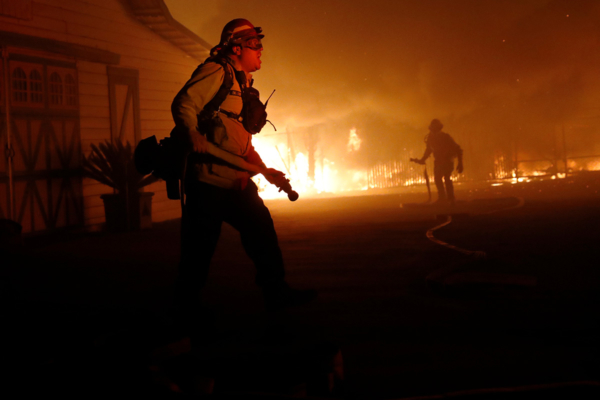 A firefighter gives orders as he battles the wind-driven Kincade fire in Windsor, California. Photo: Reuters

[Episcopal News Service] When the initial evacuation order came at 10 a.m. Oct. 26, the Rev. Sally Hubbell started calling around to her parishioners at St. Paul’s Episcopal Church in Healdsburg, just a few miles south of the increasingly ominous Kincade fire in Northern California’s Sonoma County. Hubbell, the rector, wanted to confirm they had places to stay even as she was making plans to close the church and rectory and flee with her own family.

The Rev. Christy Laborda Harris felt a similar sense of urgency at St. Stephen’s Episcopal Church farther south in Sebastopol. Though not part of the original evacuation zone, the Sebastopol area had been warned it might need to evacuate soon and could face a precautionary power outage. Harris and her family chose to leave voluntarily for Santa Rosa, the county seat to the east, though she clung to the hope she could “keep things simple” for worship and still offer her congregation a single Sunday service the next morning.

Those plans changed in an instant overnight. 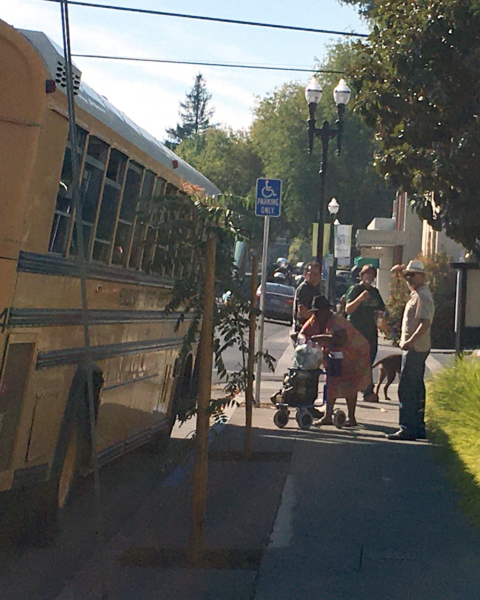 At 4 a.m., state authorities dramatically expanded the evacuation zone to include Sebastopol and even much of Santa Rosa, where Hubbell was staying with a parishioner. Her congregation had planned to attend Sunday worship with Santa Rosa’s Church of the Incarnation, but that congregation decided to cancel its services as well.

“The wind was howling, and the smell of smoke was everywhere and sirens going off in all corners,” Hubbell told Episcopal News Service by phone. Her family, like many others, fled for the second time in 24 hours.

The evacuations displaced nearly all of St. Paul’s 150 members, most of St. Stephen’s 120 members and about half of Incarnation’s 700 members. The congregations’ clergy leaders remain hopeful that they will be able to resume services at their home churches on Nov. 3 for the feast of All Saints. However, the Kincade fire, after burning more than 75,000 acres, was reported to be only 15 percent contained as of early Oct. 29.

The clergy members’ more pressing priority has been to account for all of their parishioners, through phone calls, texts, email messages and social media posts. They have received prayers and offers of support from around the Diocese of Northern California and from the dioceses to the south, while also offering mutual support to the Diocese of Los Angeles as it responds to its own menacing fire.

Wildfires have become increasingly common across California after years of drought, and as the state’s annual wildfire season expands outside its normal months, the fires grow hotter and larger. The Getty fire on the north side of Los Angeles has consumed more than 650 acres so far, and authorities are worried it will intensify and grow with the powerful wind gusts expected this week in Southern California.

“It only takes one ember to blow downwind and start another fire,” Los Angeles Fire Chief Ralph Terrazas said Oct. 29 at a news conference.

Northern California will use $6,000 from a diocesan disaster fund to buy gift cards to help families get by while they wait to return to their homes, and Episcopal Relief & Development awarded the diocese $10,000 to bolster those efforts.

Diocesan leaders have kept in constant contact with local priests since the Kincade fire ignited on Oct. 23 to help coordinate a regional response, including through clergy conference calls. Northern California Bishop Megan Traquair told ENS that on one of the conference calls, the group paused to pray, a moment that seemed to have a unifying and healing effect. “I felt that I could hear the Holy Spirit knitting us together in the process of that joint prayer,” she said.

The diocese’s practical response has included a joint effort with the neighboring Diocese of California to find Episcopalians living outside the evacuation zone who are willing to house those who had to flee. Kati Braak, Northern California’s director of operations, said the diocese’s approach is to empower local leaders by providing the resources they need to respond in their communities.

“Our role here is really to provide the pastoral response to our clergy,” Braak said.

And while most of those affected by the evacuations have chosen to stay with relatives or friends, diocesan leaders said it was encouraging to see so many Episcopalians willing to help.

“It’s been incredible, the number of people who have stepped up to offer their homes and space in their homes for their siblings in the north … who need assistance,” the Rev. Abbott Bailey, the Diocese of California’s canon to the ordinary, told ENS.

The Diocese of California, which encompasses the San Francisco Bay Area, has not been seriously threatened by fire, but many residents there have been affected by the rolling power outages that the utility company has implemented to minimize risk of new fires. A broken wire on a transmission tower is suspected of causing the Kincade fire.

Bailey also noted in an email to her diocese that two Diocese of California properties in Sonoma County, the Bishop’s Ranch and St. Dorothy’s Rest, had been included in the local evacuation orders.

“This emergency is indeed at our doorstep,” she said.

The Church of the Incarnation is in a part of Santa Rosa that never faced an evacuation order, and as of late Oct. 26, the Rev. Stephen Shaver thought his church would be able to open for worship the next day. But early Oct. 27, with residents around the city heeding the expanded evacuation, he decided he needed to focus on securing the church and ensuring his parishioners got out safely.

“That was too close for us to feel responsible to have people to try to come to church on Sunday,” he said in an interview.

Shaver and his wife left town to stay with parishioners living farther south, in Rohnert Park, and from there, he invited his congregation to join him for a virtual Morning Prayer that was streamed on the church’s Facebook page. He led another short Facebook service on Oct. 28 for the feast day of St. Simon and St. Jude.

“That for me was very important. This is what we do. We are the body of Christ, and even to gather in a virtual way when we can’t gather in person, it helps,” Shaver said.

Hubbell’s staying for now in a guest apartment at Grace Cathedral in San Francisco. She worked with a St. Paul’s staff member to coordinate the response and contact everyone in the church’s directory.

Harris, now staying in Monterrey, and a deacon from St. Stephen’s have been contacting their parishioners, too, and for those they haven’t been able to reach, Harris said they’ve asked law enforcement officers to check on them.

Shaver recruited a team of parishioners to check on everyone in his congregation’s directory. He created a Google spreadsheet, and each volunteer made calls from wherever they were, logging the results on the spreadsheet.

“I’m really proud of the way our folks mobilized and came together,” he said.