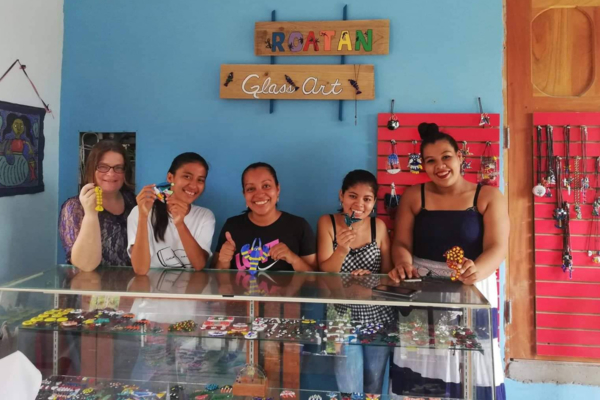 Artists show off their work at Roatan Glass Art, a workshop operated at Emmanuel Episcopal Church in Roatán, Honduras, with help from a mission team from Hattiesburg, Mississippi. Photo: John DeLancey

[Episcopal News Service] John DeLancey serves as a missionary in Honduras but describes himself more precisely as a project manager. From Mississippi, DeLancey is a glassblower by trade and now a teacher, and his ultimate goal is to make his assistance to fellow Episcopalians in the Diocese of Honduras obsolete.

“It’s all about teaching them how to do it for themselves,” DeLancey said, describing the growing micro-industries that he is supporting in Honduras as part of that diocese’s self-sustainability plan. He spoke recently with Episcopal News Service by Facebook Messenger video chat from his workshop at Emmanuel Episcopal Church in the island community of Roatán, Honduras.

His home congregation, Trinity Episcopal Church in Hattiesburg, Mississippi, has been involved in this work for more than a decade, training parishioners in glass fusing and sending them to Honduras to share what they’ve learned. The program is called Teach Them to Fish, and DeLancey now is coordinating it full time from Roatán with the help of a $36,000 grant from The Episcopal Church’s United Thank Offering program, or UTO. 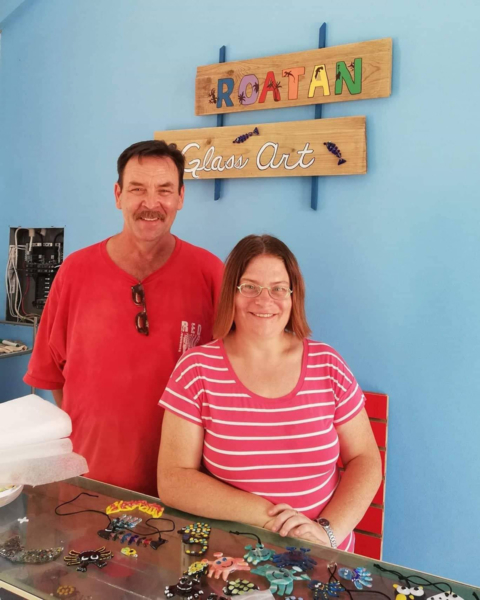 John DeLancey (left) of Hattiesburg, Mississippi, is serving at project manager for Teach Them to Fish mission in Roatán, Honduras. The Rev. Kara Mejia, a priest at Emmanuel Episcopal Church in Roatán, is translator for the mission team. Photo courtesy of John DeLancey

Teach Them to Fish grew out of an even older partnership between the Diocese of Mississippi and the Diocese of Honduras. Every year since 1982, Mississippi has sent volunteers to Honduras to staff five-day medical clinics, during which several thousand patients receive checkups, medications, dental and eye exams and even veterinary care for their pets.

Individual Mississippi congregations sponsor the Honduras medical mission for two years at a time, and Trinity Episcopal Church took its turn in 2006 and 2007. It was during that period that Honduras Bishop Lloyd Allen met DeLancey at his glass art studio in Hattiesburg.

Allen mentioned that he was in the market for new stained-glass windows for some of the churches in Honduras, but stained glass can be expensive. He wondered if DeLancey would consider taking on the work.

DeLancey suggested instead that he teach Allen’s parishioners how to make their own stained glass. From there, the Teach Them to Fish mission team was born.

The team from Trinity decided to focus on fused glass art, which can be produced with skills easily taught by DeLancey and mission volunteers. Every Wednesday, the Trinity volunteers met to learn those skills themselves. They produced glass artworks that were sold in Mississippi to pay for their supplies and their travel to Honduras. Then, on their mission trips, they taught what they had learned to Hondurans.

“I really fell in love with the place,” DeLancey said, and he was happy to share the skills of his trade with residents of the Central American country.

About 20 parishioners from Trinity and a nearby congregation, Church of the Ascension, have participated over the years, and some still gather every Wednesday in Hattiesburg to work on glass art to support the mission. DeLancey estimates Teach Them to Fish has organized about two dozen mission trips to Honduras, usually once or twice a year. 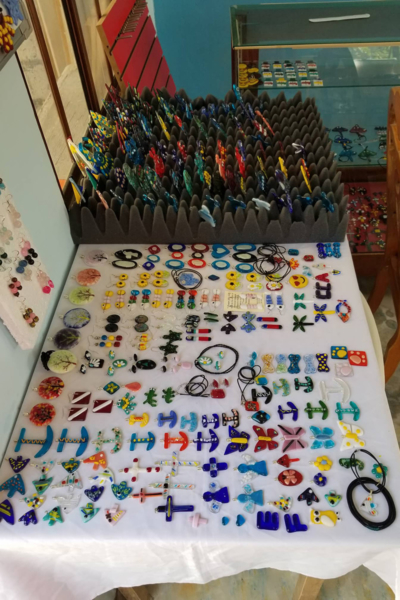 The glass art is produced at several congregations in Honduras and sold to tourists visiting the island resort community of Roatán. Photo: John DeLancey

The initial focus was primarily on training parishioners at Iglesia Episcopal Christo Redentor in the capital of Tegucigalpa, so that congregation could serve as a kind of micro-industry incubator, “to teach more skills and kind of use them as a teaching center and building a team to be able to travel the country,” DeLancey said.

Teach Them to Fish has since expanded its trainings to six congregations on the mainland and Roatán, and DeLancey has been living in Honduras since August 2018 to accelerate that growth.

“The congregations in Mississippi and Honduras have built a warm and lasting friendship through the years,” the Rev. Marian Dulaney Fortner told ENS by email. She is Trinity’s former rector and now serves as interim rector at St. James’ Episcopal Church in Jackson, Mississippi. “We are hopeful that John will be able to launch a more sustainable framework by his presence in Honduras.”

Such diocesan micro-industries, which also have include jewelry making, offer Hondurans a potential livelihood and sense of pride in their work while also supporting the diocese’s long-term goal of self-sufficiency, Allen told ENS.

“What I’ve been trying to do with the diocese is walk the diocese away from a legacy of dependence,” Allen said in an interview in Montgomery, Alabama, while he was attending Executive Council earlier this month.

Honduras and the six other dioceses in The Episcopal Church’s Province IX, which covers parts of Central and South America and the Caribbean, have been exploring ways of achieving financial autonomy since 2011. Each diocese adopted that as a goal in 2012 and soon began working with churchwide leaders on plans to shift away from Province IX’s historic reliance on subsidies from the church’s block grant program.

Those efforts have included identifying available resources, promoting local development and strengthening ties to companion dioceses and congregations. The Episcopal Church’s General Convention expressed its support for such work in 2015.

Province IX received nearly $3.6 million in block grants during the 2016-2018 triennium, including $550,000 specifically to support the Diocese of the Dominican Republic’s self-sustainability plan. Funding for the province in the current triennium, 2019-2021, was reduced to about $2.9 million.

After the Diocese of Honduras received a little more than $1 million in block grants during the previous triennium, General Convention set aside just $580,000 for Honduras in the current three-year period.

Allen, who has been bishop of Honduras since 2001, said his diocese’s recent emphasis on self-sustainability has not been embraced wholeheartedly by all Episcopalians there, but he thinks ministries like the one DeLancey is leading are helping to change the mindset across the diocese’s 130 congregations, 14 of which he said have reached their own benchmarks of sustainability.

“It’s a slow process,” Allen said, noting the various challenges facing Hondurans today, including lack of resources and the disruptions to daily life caused by violent drug cartels and gangs.

Those challenges are acutely felt on the mainland, but Roatán, as a popular island stop for tourists, is an ideal site for marketing the products generated by the diocesan micro-industries. Cruise ships regularly bring several thousand American visitors at a time to the island, DeLancey said, and they now are the prime customers for the congregations he and his team have trained.

Now as in-country project manager, DeLancey has seen the scope of his work expand. In addition to sharing his trade, he is teaching Hondurans management skills and computer technology so they can maintain their own businesses. And as more mainland congregations are trained in fused glass, DeLancey will ensure there is an efficient process to get their products to market on Roatán.

The UTO grant is paying DeLancey’s living expenses for a year, but he expects he will continue his work in Roatán well beyond that period.