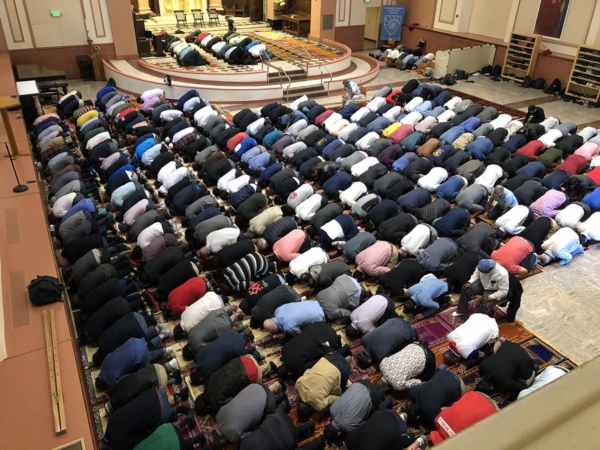 Between 300 and 350 Muslims gather weekly in the Cathedral Church of St. Paul’s sanctuary for Friday prayers. The cathedral has offered the Muslim community a convenient downtown location to pray since August 2000. Photo: Lynette Wilson/Episcopal News Service

[Episcopal News Service – Boston] Ayman Bassyouni arrives early at the Cathedral Church of St. Paul around noon each Friday to lay 15 rows of silk prayer rugs end to end on the sanctuary’s floor.

An Egyptian, Bassyouni regularly attends jumah, or Friday prayers, at the Episcopal cathedral. He is one of a few hundred men and a handful of women – mostly immigrants from North Africa, South and Southeast Asia, the Middle East and the Balkans – who pray there together.

In Islam, Friday is considered the sacred day of worship; ordinarily, Muslims pray five times a day, but on Friday, males are obliged to pray in congregation at midday.

The cathedral’s longstanding welcome of the Muslim community is one way it lives into its mission to be “a house of prayer for all people.” In the United States, where religious literacy is in decline but religion plays an increasing role in the cultural narrative, interfaith relationships build tolerance.

Beginning on Sunday, in a partnership with Boston’s Jewish and Muslim communities, St. Paul’s will host “ABRAHAM: Out of One, Many.” Presented by CARAVAN, the Oct. 27-Dec. 6 exhibit explores the concept of living harmoniously through artists’ paintings interpreting Abraham’s life and faith journey.

“Many people struggle to really understand their own tradition, let alone other people’s tradition; and my experience has been that when you’re in conversation with people of a different tradition, it causes you to learn more about your own tradition too,” said the Very Rev. Amy McCreath, dean of the cathedral, about the exhibit in a parish newsletter. “It feels to me really, really important right now that we understand our tradition and how it’s connected both to Judaism and Islam, and that we counter that sectarianism and that violence, both intellectually by knowing the history, [as well as through] building relationships with real people in real time.

“Our hope is that parishes will bring a group to come and tour the exhibit, but even more we would hope that they would call the temple down the road and bring an interfaith group to come and experience it and talk about what they see together.” 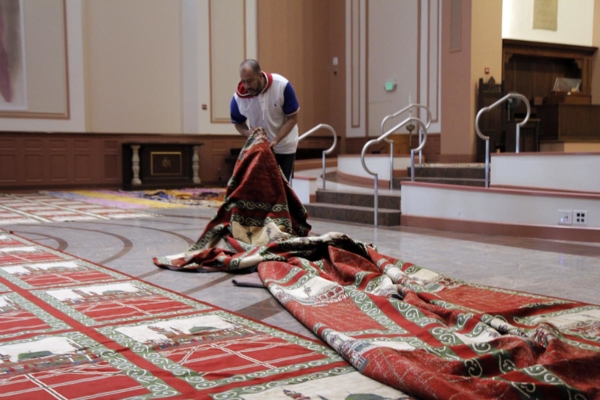 Ayman Bassyouni, an Egyptian who came to the United States three years ago, arrives early each Friday to lay silk prayer rugs on the floor in the sanctuary of the Cathedral Church of St. Paul in Boston, Massachusetts. Photo: Lynette Wilson/Episcopal News Service

The three major monotheistic faiths, Judaism, Christianity and Islam, trace their origins to Abraham – Islam through Abraham and Hagar’s son, Ishmael, and Judaism through Abraham and Sarah’s son, Isaac. And with God’s revelation of the Quran through his messenger, the Prophet Muhammad, the Arabians who eventually became Muslims also became “people of the book.” Still, the commonalities extend further, with all three religions rooted in popular movements against social inequality and the elite’s abuses of power.

An estimated 3.45 million Muslims live in the United States, currently 1.1 percent of the population, but that number is expected to double by 2050. As a comparison, Jews make up 1.8 percent and Christians an estimated 79.5 percent of the U.S. population, according to the Pew Research Center.

St. Paul’s location on Tremont Street across from Boston Common – America’s oldest park, founded in 1634 – and down the hill from the Massachusetts State House gives it a particular “proclamational kerygma,” said Bishop Alan M. Gates, who became bishop of Massachusetts five years ago.

“It’s a really profound witness … and interfaith witness, peace witness, hospitality witness in the deepest sense of the word,” he said, during an interview with Episcopal News Service in his office, overlooking Boston Common. 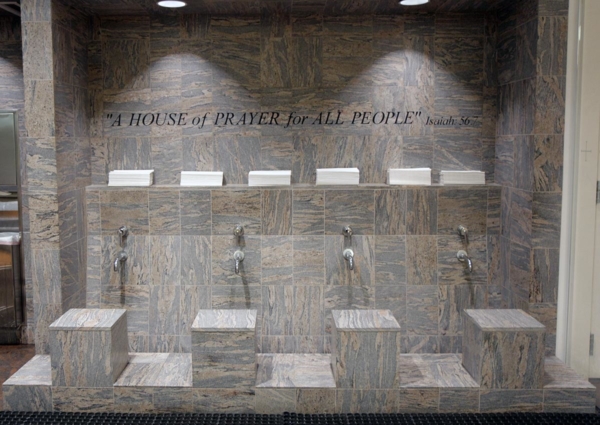 St. Paul’s underwent a $10 million renovation in 2014, and part of that renovation included installation of a footbath in the undercroft. Photo: Lynette Wilson/Episcopal News Service

Five years ago, St. Paul’s underwent a $10 million renovation. The pews were removed from the sanctuary; skylights were installed, brightening and opening the space to multiple uses; glass doors exposed the cathedral to the street; renovations to the undercroft were done to facilitate meetings and events; and a foot-washing station, where Muslims wash their feet in a ritual ablution before formal prayer, was installed.

St. Paul’s, with its convenient location, first welcomed the Muslim community for Friday prayer in August 2000, after the congregation outgrew its space in another downtown church. For the first 15 years, Muslims gathered in the undercroft and eventually added a second shift as more men came, before moving upstairs into the sanctuary, which invited greater visibility. As fear of the other dominates in politics and the media, the longstanding relationship sends a message.

“In this day and age, in particular post-9/11, right in the midst of a season in our political life when we are being encouraged to be wary of people of different faiths, especially immigrants, especially Muslims, we are a testament to the lie of that,” said McCreath, in an interview with ENS in the cathedral’s glass-walled chapel.

Founded as a church in 1818 by wealthy, influential Boston patriots who sought to establish a uniquely “American Episcopal parish,” and the first example of Greek Revival architecture in Boston, St. Paul’s became a cathedral in 1912. The seventh bishop of Massachusetts, the Rt. Rev. William Lawrence, conceived of a cathedral aligned with the last line of Isaiah 56:7: “for my house shall be called a house of prayer for all peoples.”

Greater Boston, an area including 127 cities and towns, has a population that exceeds 8 million and that is increasingly diverse; the region is an academic and medical research hub.

The Muslim community gathering for Friday prayer on Boston Common was first started in the 1990s by Mahmood Rahman’s father, an immigrant from Bangladesh who taught at Suffolk University, a private research university around the corner from the statehouse on Beacon Hill.

“My dad was a professor at the business school over there, and like anything else, the genesis for this came about because there was a need,” said Rahman, one of the Friday prayers’ primary organizers. “Being a Muslim, the Friday noon prayer is our required congregational prayer. … It’s obligatory for men to come, listen to a sermon and have our prayer. All the other prayers you can do at home; you don’t have to go to the mosque. After the first couple of years being a professor at the business school, he realized he was missing obligatory Friday prayers, and this gnawed at and weighed heavily on him.”

Rahman’s father realized the closest mosque was a 20-minute subway ride away, neither convenient nor practical alongside his teaching schedule. And at the time, Suffolk didn’t have a Muslim student association, so he asked the administration if he could use a room. The university consented and the prayers started with him and a couple of students; as word spread, 20 to 30 people not affiliated with the university began attending, and finally, for liability reasons, the congregation needed to find another space, which it did in a nearby church. After two or three years, the congregation attracted 100 people and “was bursting at the seams,” said Rahman.

By 2000, given the growth and timing – the host church was preparing for a major renovation – it made sense for the Muslim congregation to find another space. One of its members, Ibrahim Ibrahim, the owner of the café next door to St. Paul’s, had become acquainted with the then-dean, the Very Rev. John “Jep” Streit Jr.

Streit took Ibrahim on a tour of the undercroft, a place large enough to store prayer rugs and shoe racks. The two agreed it would work, “and so they started praying on Fridays almost right away,” said Streit, who served as St. Paul’s dean from 1995 to 2017.

Streit says in hindsight he should have consulted then Massachusetts Bishop Tom Shaw, who was away at the time. When Shaw returned, he was giving a potential donor a tour of the cathedral when, to his surprise, they happened upon Muslims praying in the basement. The person said, “Who are these people? What are they doing here?” And the bishop didn’t know.

Later, Shaw, clearly angry, approached Streit in his office and asked what Muslims were doing praying in the basement, to which Streit responded, “Well, we claim to be a house of prayer for all people. It’s either true or it isn’t.”

“And he looked at me and said, ‘OK, just checking.’ He was fine with it; he was just embarrassed he didn’t know.”

A year later, in a taxi to the airport, Shaw learned his driver prayed at St. Paul’s, Streit explained.

“He [Shaw] always used to engage people, and he asked this guy, ‘Are you religious?’ And the guy said he was Muslim, and he said, ‘Oh, where do you pray?’ And he said, ‘Oh, there’s a church in Boston, it’s so wonderful; they let us pray in their church, and it’s so great.’ And Tom said, ‘That’s my church. I’m the bishop at that church.’”

The taxi driver stopped the car, got out, hugged Shaw and said, “Wow, you have no idea what it means to us.”