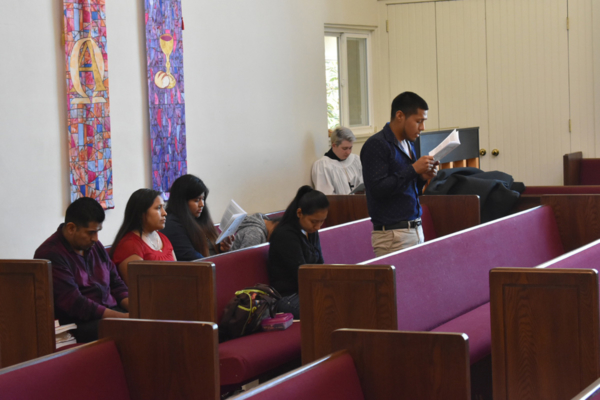 Gabriel Rosales stands to read one of the scriptural lessons during the Spanish-language service Oct. 20 at All Saints’ Episcopal Church in Montgomery, Alabama. Photo: David Paulsen/Episcopal News Service

[Episcopal News Service – Montgomery, Alabama] Shirley Fifield, 88, has attended services at All Saints’ Episcopal Church in Montgomery since 1973. A widow whose family roots are in Wisconsin, she attends the Sunday morning Eucharist at All Saints’, and she speaks only English.

Gabriel Rosales, 25, and his wife, Rosalba Barrera, 19, are fluent in three languages, including Spanish and an indigenous Mexican language known as Mixtec. They began attending the Sunday afternoon Spanish-language service at All Saints’ about six months ago and since then have had two of their children baptized here.

All Saints’ has “gone through lots of transformations” over the years, Fifield said, mentioning long-ago renovations and additions to the modest church building located about 10 minutes west of downtown. The biggest transformation, though, may be the one now underway as two small Episcopal communities, separated by language and culture, find common ground and opportunities to share their faith with each other.

An informal blending of the English-language and Spanish-language communities takes place during the hospitality hour between the two services, and church leaders are discussing ways of encouraging further interaction with help from a $14,450 grant from The Episcopal Church’s United Thank Offering program, or UTO. 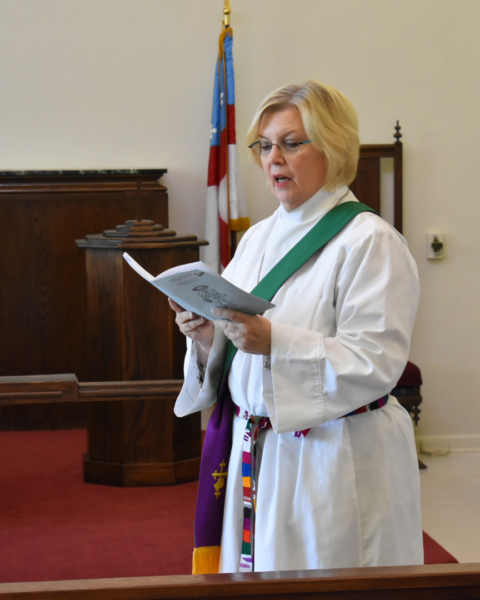 The English-language congregation at All Saints’ is primarily older adults, and attendance of about 25 is typical at the 10:30 a.m. Sunday services led by the Rev. David Peeples, priest-in-charge. The Spanish-language worshipping community is called Todos Santos, “All Saints” in Spanish, and its 12:30 p.m. Sunday services are led by the Rev. Pamela Long, a Spanish professor at Auburn University at Montgomery who recently was ordained a deacon. Turnout for a baptism can top 100 people, Long said, but typical attendance usually mirrors the English-language services, about 25.

“They were so excited to have children in the building again,” Long said. “They were just overjoyed.”

Rosales said he and his family felt a connection to the church. “When I come here, I feel like home,” he said. He and Barrera attended the Oct. 20 afternoon service with Rosales’ parents and sisters, all from Mexico.

Long has been involved in this evolving ministry for more than a decade, starting when she was a parishioner at another congregation, Church of the Ascension just south of downtown Montgomery.

In 2006, the diocese’s missioner for Latino outreach, a priest from Colombia, began visiting Ascension once a month to lead an afternoon service in Spanish, and after he left the diocese to return to Colombia, Long filled in as a lay leader for those monthly services.

One Sunday in September 2016 proved to be a turning point. A couple Latino families had asked for their children to be baptized, 12 in all, and the ceremony was scheduled at one of Ascension’s English-language services. About 150 relatives came, Long said, which took the Ascension congregation by surprise.

Many of those Latino families continued to attend Ascension after the baptisms, Long said, but the clash of cultures was too difficult for the congregation there to navigate. She discussed the future of this Latino ministry with Alabama Bishop Kee Sloan, and he connected her with church leaders at All Saints’, which had tried unsuccessfully to create its own Latino ministries.

“There is a real need for that, for the church to reach out to Spanish-speaking people,” Sloan told Episcopal News Service during his visit Oct. 18 with The Episcopal Church’s Executive Council, which held its fall meeting in Montgomery. He lauded All Saints’ as “a joyful congregation.”

In January 2019, the Latino families that had attended Ascension joined Long in an inaugural Spanish-language service at All Saints’, claiming it as their new spiritual home.

“It came at a time for our parish when we were wondering what does the future hold for us,” said Peeples, who serves All Saints’ part time and also works as a hospice chaplain. The congregation was not growing on its own, so it was open to trying something new. 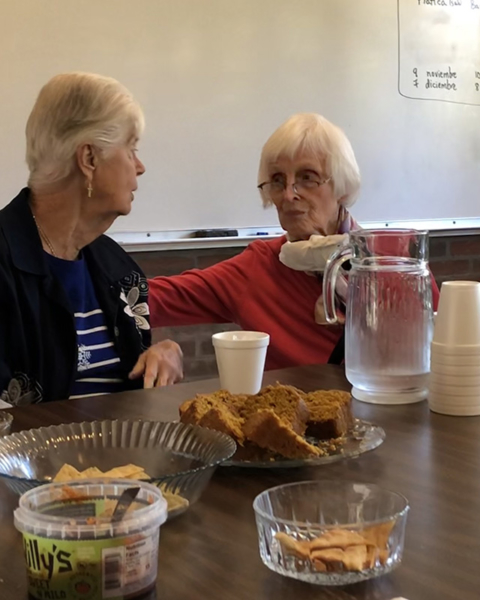 All Saints’ and Todos Santos are separate worshipping communities, but they are finding ways to engage with each other. Fifield, while struggling with the language barrier, said she thinks with time it will become easier for the two groups to communicate. On Oct. 20, she struck up a brief conversation at the hospitality hour with a couple and their daughter who had arrived early for the Spanish-language service.

Peeples and Long also said the two groups came together in a big way for a joint Easter service this year that was followed by an outdoor church picnic. “That was the best Easter ever,” Long said. Another joint service is planned around All Saints’ Day.

The UTO grant is intended to enhance the worship space during the Todos Santos services and make the church more welcoming for Latino families. The English-language service is typically accompanied by an organist or pianist, and Long would like to purchase other instruments for a Spanish-language praise band. Some of the money also will be used to purchase icons, or paintings of Jesus, Mary and other saints, that can be placed at the altar for the afternoon service and then removed.

“Latinos are very serious about the cloud of witnesses. They want to feel the saints in their worship,” Long said.

After the 10:30 a.m. service on Oct. 20, Gwen Moore, an All Saints’ vestry member, helped set up treats for the hospitality hour on the table in a gathering area near the church’s entrance. Moore has been attending All Saints’ about five years. She prefers smaller community churches like this and thinks the addition of Todos Santos has potential to “get the life back” in the church she has grown to love.

“It became a blessing when this door opened for us,” Moore said.