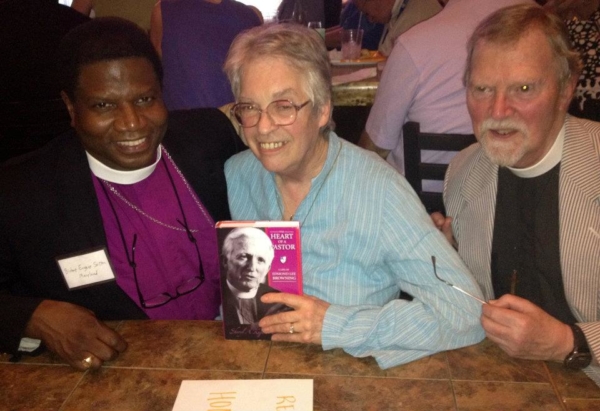 [Diocese of Maryland] The Rev. Ronald Miller died Sept. 30, 2019, after a life of service to the church. Miller’s wife, Mary, died just a year before in September 2018. Miller served congregations in Baltimore including St. Mary the Virgin, Walbrook; Church of the Advent, Federal Hill; St. James’, Lafayette Square; and St. Bartholomew’s, Ten Hills. He also served for a period on the Diocese of Maryland staff and, more recently, sang in the choir at the Cathedral of the Incarnation, also in Baltimore. His ordained ministry spanned more than 55 years in the dioceses of Washington, Pittsburgh and Maryland.

Thursday, Oct. 17, marked not only the celebration of and thanksgiving for Miller’s life, but also the celebration of this couple’s being reunited in God. The Millers were known and loved across Baltimore, the Episcopal Diocese of Maryland and The Episcopal Church. They worked tirelessly all their adult lives, he as an Episcopal priest and she as a layperson, for issues of social justice, peace, racial reconciliation, LGBTQ+ rights and marriage equality. Those that knew them attest to their strength as a couple, as true partners who used their gifts to work together to bring God’s dream to this world. Presiding Bishop Michael Curry preached at the Oct. 17 service to celebrate Miller’s life, or “as someone referred to him, the other half of the power couple,” Curry said.

Miller served as associate and assistant rector at St. James’ Episcopal Church in Baltimore for most of Curry’s 12 years as rector there. After retiring and doing some interim work, Miller began attending the Cathedral of the Incarnation to keep healthy boundaries with his former congregation. Mary Miller continued to worship and be heavily involved at St. James’, the first Episcopal African American congregation south of the Mason-Dixon Line.

Ahead of their time, the Millers fought for racial reconciliation. Mary Miller was involved in the Episcopal Society for Cultural and Racial Unity, founded in 1957, which sought to rise beyond “separate but equal” races in the church and is, Curry believes, the first whole church effort toward racial reconciliation. As Curry described at the celebration of her life last year, Mary Miller saw God’s dream and did everything she could to make that dream a reality on earth. “Mary had a way of nudging rectors in the direction of God’s dream. … Mary had ways she would work with – and she was good – and I know from first experience. … She’d do it with rectors, and I became a bishop, and she was doing it with me as a bishop,” he said.

Mary Miller was known throughout the church, especially for her work as executive director of the Episcopal Peace Fellowship. The Rev. Annette Chappell, interim rector of Holy Trinity, Essex, in the Diocese of Maryland, remarked that she knew Miller’s name before she even realized Mary Miller was in her own diocese. Mary Miller was outspoken, direct, a true warrior – in the best, nonviolent sense of the word – for peace.

Ron Miller served more quietly, through his pastoral ministry and advocacy work across the church. He was a former Marine who worked for peace in a gentle way and who accepted his wife’s commitment “to refuse to participate in or give moral support to any war” through the Episcopal Peace Fellowship. They both served on the forefront of the Episcopal Urban Caucus.

In an interview last week, the Rt. Rev. Robert W. Ihloff, 13th bishop of Maryland, remarked, “Ron and Mary lived the gospel of social justice, believing it with their whole being. They exuded that in their priorities, what they spent their money on, what they did. When they were relocating, they chose a poor neighborhood to live in, indicative of their commitment to Baltimore.” Ihloff commented that he found it a powerful coincidence that on the day U.S. Rep. Elijah Cummings died, the life of another great Maryland voice for social justice was celebrated. The Millers understood that “a disproportionate amount of Jesus’ time was spent with the poor and marginalized,” Ihloff said.

Nancy Ihloff, the bishop’s wife, who has attended the Cathedral of the Incarnation for many years, commented that Ron Miller had no other shirts but his clergy shirts and that he always wore his collar, even when singing in the choir. Bishop Ihloff remarked that Ron Miller was making a statement of his calling by wearing his collar, not being wrapped up in it as his whole identity. “He was mindful of the biblical passage [Psalm 110:4] that ‘you are a priest forever, in the order of Melchizedek.’ His was not a churchy priesthood, it was a down-and-dirty priesthood. They [Ron and Mary] were modest and models of Christian living in so many ways,” he said.

The presiding bishop commented that the Millers were always his teachers and that their families spent time together annually during the holidays. “Every year at Thanksgiving and Christmas,” Curry preached last year, “I would sit at Mary’s feet.”

On Oct. 17, Curry preached of Ron Miller’s deep faithfulness, punctuality and willingness to give his heart and his life to the God he loved and trusted. He faithfully attended church until he could no longer get there. According to Chappell, Miller remained involved in a Bible study he began more than 20 years ago until he moved into a retirement home last year. Curry commented in his sermon that every sermon Miller ever preached was about love. He would faithfully go through the Scripture, “first the Old Testament reading … then the New Testament and the Gospel,” with each sermon a “meditation on how God’s love tried to work through human life,” Curry said.

The presiding bishop’s sermons at both celebrations of life were powerful, delightful and filled with humor. You can view Curry’s sermon, “There’s Something About Mary” from Mary Miller’s celebration of life Oct. 3, 2018, in which he takes the concept of “Mary-ness” through Scripture up to Mary Miller, here. You can view Curry’s sermon at Ron Miller’s celebration of life Oct. 17, 2019, on the Cathedral of the Incarnation’s YouTube channel here.

– Carrie Graves is canon for communications in the Diocese of Maryland.