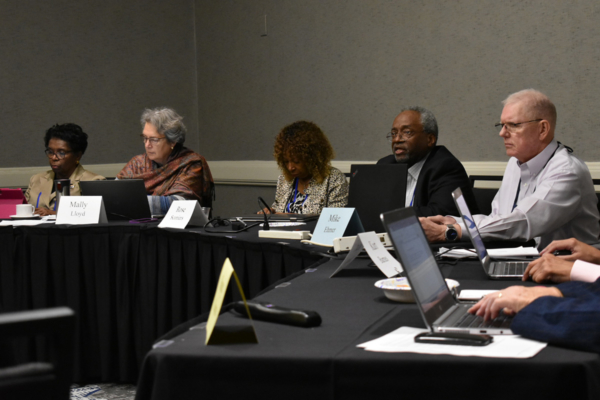 [Episcopal News Service – Montgomery, Alabama] The Episcopal Church’s Executive Council concluded its four-day meeting here Oct. 21 with a series of votes that included an endorsement of plans for a dramatic expansion of Presiding Bishop Michael Curry’s Way of Love initiative, featuring plans for a major revival event in New York and a growing list of media projects.

Curry spoke to the purpose of those efforts during a weekend committee meeting and again before the vote of the full Executive Council on its final day. Sharing the message of the Way of Love more broadly will counter a strain of conservative Christianity that has strayed from the teachings of Jesus, he said, and the church’s affirmation of a Christian message of love “can be helpful for a proudly divided and polarized nation.”

Executive Council, the church’s governing body between General Convention meetings, also approved a shift in the church’s shareholder advocacy strategy toward the Israeli-Palestinian conflict that will result in the church’s selling of all its stocks in three companies that do business tied to construction of Israeli settlements in Palestinian territories. Those companies will be added to a new “no-buy list” that will be based on the church’s recently enacted “human rights investment screen.”

Much of this fall meeting focused on the theme of racial reconciliation, drawing on examples from Alabama’s capital city, known for its historic connections to the Civil War and the civil rights movement. Executive Council members broke from their business sessions to spend all day Oct. 19 on a pilgrimage to the Legacy Museum and the National Memorial for Peace and Justice, which trace four centuries of racial violence in America and memorialize its victims.

The Episcopal Church’s core racial reconciliation project, the Becoming Beloved Community framework, encourages and assists congregations and individual Episcopalians in engaging in difficult conversations about racism and racial healing. On Oct. 21, Executive Council approved more than $300,000 from a new grant program to support racial healing ministries and programs around the country. 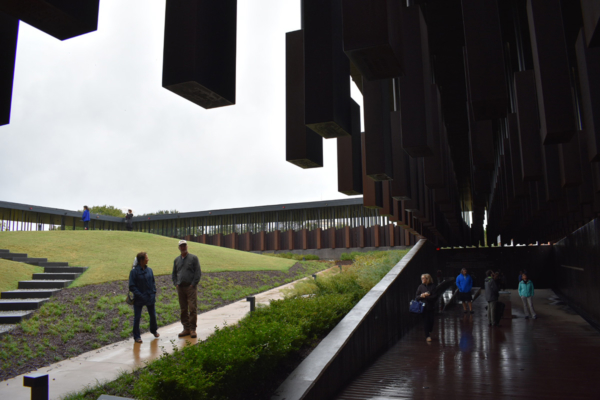 Executive Council spent all day Oct. 19 on a pilgrimage to the Legacy Museum and the National Memorial for Peace and Justice, pictured here, in Montgomery, Alabama. Photo: David Paulsen/Episcopal News Service

Other grants approved by Executive Council included nearly $690,000 for church planting and $209,000 from the church’s Constable Fund.

In another measure, Executive Council accepted an “Episcopal Creation Covenant” drafted by the Task Force on Care of Creation and Environmental Racism that outlined the church’s three primary commitments related to environmental stewardship: “loving formation, liberating advocacy and life-giving conservation.”

Over the four days, members of the presiding bishop’s staff briefed Executive Council on a range of ongoing priorities for the church, including the fate of Episcopal Migration Ministries, EMM, which is dealing with the uncertainty of the Trump administration’s refugee policies.

The administration announced last month that it would limit the State Department’s resettlement program to a historic low of just 18,000 refugees, at a time when the global refugee crisis has never been worse, said Demetrio Alvero, the acting director of EMM.

Alvero, speaking Oct. 20 to Executive Council’s Committee on Mission Within The Episcopal Church, said EMM still does not know yet whether it will be renewed for another year as one of the nine agencies with State Department contracts to facilitate refugee resettlement.

Even if that work ends, “what does continue is the engagement of churches … to support the program locally,” Alvero said, so whatever the government decides, EMM has begun developing plans for expanding its advocacy and support work for refugees at the local level. EMM also is looking for ways to assist asylum-seekers in a more meaningful way, given the increase in migrants on the southern U.S. border.

Executive Council also heard from administrative and communications staff about proposed renovations at the Episcopal Church Center in New York. In response, Executive Council approved a $750,000 project to upgrade the conference room and pantry space on the center’s fifth floor and to add a multimedia studio that will streamline the church’s growing work on videos and podcasts.

Such multimedia work plays a central role in the Way of Love expansion spearheaded by the Rev. Stephanie Spellers, the presiding bishop’s canon for evangelism, reconciliation and creation care. She noted the church has gained momentum in its evangelism since Curry stepped into the global spotlight with his May 2018 royal wedding sermon in London. 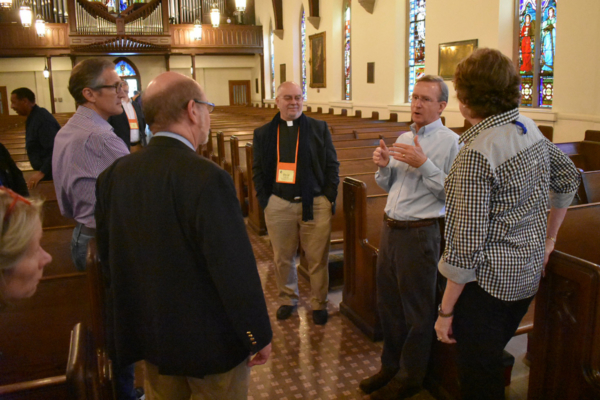 The Way of Love is a “rule of life” framework featuring seven practices for Jesus-centered living. Curry introduced it at General Convention in July 2018, and since then, the church and partner organizations have developed resources to help Episcopalians incorporate the Way of Love into their daily lives and spiritual growth.

The church also has launched a Way of Love podcast featuring Curry and a “Traveling the Way of Love” video series highlighting Episcopalians whose work exemplifies each of the seven practices. Executive Council voted Oct. 21 to allow the church’s development office to pursue a campaign to raise $1.3 million in a low-key, targeted appeal to bolster those and other Way of Love initiatives. One such proposal would enlist Curry to host a limited TV series that could be distributed on a national streaming service, an idea that is still in a conceptual stage.

The church already has begun laying the foundation for a New York revival, after receiving interest from the two Episcopal dioceses in the city, as well as the Evangelical Lutheran Church in America synod there. Curry’s staff has helped facilitate 13 smaller Episcopal revival events churchwide, including one planned for this weekend in Appleton, Wisconsin, so a New York revival would continue that work on a larger scale, Spellers said, with opportunities for satellite revivals around the area on the same day.

If partners and donors can be secured to cover the estimated $335,000 cost, Spellers expects the New York revival to take place in October 2020 and draw more than 10,000 people. Madison Square Garden, Barclays Center and Yankee Stadium are some of the potential venues.

The three resolutions relating to the Israeli-Palestinian conflict passed with little debate or disagreement, a stark contrast to the tensions surrounding the same issue at last year’s General Convention in Austin, Texas. During General Convention, the House of Bishops rejected a measure seen as endorsing a policy of divestment, but the bishops joined the deputies in supporting the creation of a human rights investment screen modeled after one created earlier by the Evangelical Lutheran Church in America.

Executive Council on Oct. 21 approved the following language: “Executive Council hereby recommends that any Episcopal Church institutional investor not invest in any corporation supporting or benefiting from denial of human rights consistent with policy adopted by General Convention or Executive Council.”

The resolution then proceeds to apply that screen to the Palestinian territories, barring investment in “any corporation that supports or benefits from denial of human rights in or through the occupation of the West Bank, East Jerusalem or the Gaza Strip.”

A companion resolution specifies that three companies meet that criteria: Motorola, Caterpillar and Israel Discount Bank. The church has engaged for years in shareholder engagement with those companies without persuading them to respond as requested to human rights violations in the Palestinian territories. The church will sell about $1.2 million in Motorola shares and about $125,000 in Caterpillar shares, as well as a much smaller amount in shares of Israel Discount Bank.

“This is a stewardship issue,” said the Rev. Charles Robertson, canon to the presiding bishop for ministry beyond The Episcopal Church, in a press release after Executive Council wrapped its meeting. “The church does not want to make profits from companies that contribute to the suffering of others.”

Lay member Russ Randle of the Diocese of Virginia proposed an amendment to one of the shareholder resolutions, asking the Committee on Corporate Social Responsibility to research an upcoming stock offering by Saudi Arabia’s state-owned oil company, for possible church engagement with the banks underwriting that stock offering.

“If we’re going to be calling out human rights violations in the Middle East, we need to be paying attention to this one as well,” Randle said. Executive Council passed his amendment and the underlying resolution.

In other news from Executive Council, the Rev. Charles Graves was elected to fill a vacant seat. Graves was named in April as Canterbury campus missioner in Houston for the Diocese of Texas.

Every year, Executive Council also approves waivers for some dioceses that have failed to pay their assessments to The Episcopal Church at the required level, which now stands at 15 percent of diocesan revenue. After concerted efforts to bring all of the more than 100 dioceses into compliance, all but six dioceses have either paid their full assessments or received short-term waivers, according to the Rev. Mally Lloyd, chair of Executive Council’s Finance Committee.

Alice Freeman, a lay Executive Council member from the Diocese of North Carolina, voiced a concern that this meeting was being held in one of those dioceses, Alabama.

“They are not paying theirs, but they are the beneficiaries of this church contributing economically to their diocese,” Freeman said.

“You got it,” Lloyd said, after acknowledging that she had refrained from bringing up the topic with Alabama Bishop Kee Sloan when he visited with Executive Council on Oct. 18, welcoming them to Montgomery.

Dioceses that don’t pay their assessments or receive waivers are ineligible for participation in certain church programs, including churchwide grants.

All the resolutions passed by Executive Council on Oct. 21 can be reviewed here.