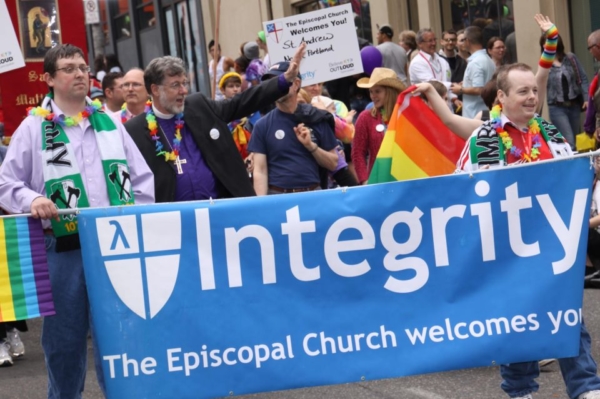 An Integrity chapter participates in a Pride parade in Portland, Oregon, in 2012. Integrity has been advocating for LGBTQ inclusion in The Episcopal Church since 1974. Photo: Integrity via Facebook

[Episcopal News Service] Integrity, the nonprofit organization dedicated to LGBTQ advocacy within The Episcopal Church, is a shadow of its former self, beset by struggles with leadership, finances and communication – as well as questions about whether it is still relevant or necessary in 2019.

Many longtime members and former Integrity leaders have expressed frustration and concern at what they consider mismanagement and a lack of transparency, and with tension boiling over on social media within the past two weeks, board members say they are making a renewed effort to improve organization and communication. 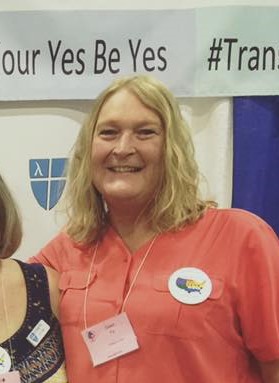 The Rev. Gwen Fry at the 2015 General Convention. Photo: Integrity via Facebook

“I have failed to be perfect … and I fear that the spiritual, mental, and physical health of Integrity has suffered because of it. For this, I am profoundly sorry for any part that I have contributed to with regard to the health of our organization,” the Rev. Gwen Fry, president of Integrity, wrote in a statement posted on Facebook and Integrity’s new website, which went live on Oct. 17.

Founded in 1974 by Louie Crew to help gay Episcopalians gain acceptance within the church, Integrity grew to have 58 local chapters and about 2,000 active members by 2011, the last year for which it released a complete annual report. With its official mission of full inclusion of all LGBTQ people in the sacramental life of The Episcopal Church, Integrity has been an active presence at General Conventions since 1977, helping draft resolutions and gathering support. Its primary goal was accomplished in 2015, when General Convention approved marriage equality for same-sex couples.

Fry’s term as president has been marked by instability and uncertainty, but Integrity’s struggle to stay afloat in a radically changing environment runs deeper. According to IRS filings, Integrity had $516,152 in net assets at the start of 2013 and had been taking in well over $200,000 per year for the preceding several years. By 2015, the last year it filed a full return to the IRS, Integrity reported $134,029 in net assets. That year, it reported just $54,574 in revenue, but $225,225 in expenses. In January 2018, Integrity laid off the last of its paid staff. The Rev. Gwen Fry, the previous vice president of national affairs who formerly served in the Diocese of Arkansas, was elected president for a three-year term in June 2018, and during the Integrity Eucharist at that year’s General Convention, she announced that Integrity had been renamed The Episcopal Rainbow, though that change has apparently not taken effect.

Much of the confusion expressed by Integrity members focuses on who is actually in charge of the organization. Between March and June 2018, DeAnna Bosch, treasurer; Letty Guevara-Cuence, secretary/communications director; and Brent Cox, vice president of national affairs, all resigned, leaving Kay Smith Riggle, vice president of local affairs, as the only remaining elected board member.

“It really had to do with other things going on in those people’s lives, and they realized they just didn’t have the time,” Smith Riggle told Episcopal News Service. “We weren’t really trying to hide anything. Things were moving really quickly, and it was difficult to respond to what was happening in addition to getting the information out.”

Integrity’s bylaws specify that if the president is “unable to perform his/her office,” the Stakeholders’ Council (made up of Integrity’s chapter- and diocesan-level leaders) elects a new president to serve the remainder of that term.

Smith Riggle told ENS that a new election was “under consideration” at one point but directed further questions to Fry, who did not respond to requests for an interview.

But by October, with no audit and the old website (featuring the previous board of directors, whose terms expired in 2018) still up, members began venting their frustration on the official Integrity Facebook group.

“This should be profoundly concerning for all of us who love and believed in this organization and its role within our church, and who play a role on the ground in our parishes and dioceses. We are a people who believe in resurrection. When can we have a serious discussion about what it would take to have a proper resurrection for Integrity USA? Is it better to officially close down, then choose to re-launch after this (long overdue) audit?” wrote Jason Crighton.

“The board seems not to have any funds to work with, and also seems to value a culture of secrecy and distancing itself from the membership. It may be time to let it go,” wrote Frank Dowd, a view shared by other commenters.

Several commenters wrote that their dues checks had been cashed without any acknowledgment or confirmation, that the website’s map of welcoming congregations had not been updated since 2014, and that commenters’ questions were not being answered. Members have repeatedly expressed concern about Integrity’s financial transparency, noting that it has not released a full financial report since 2011 or filed a full 990 return with the IRS since 2015, and have wondered whether the organization is in danger of losing its tax-exempt status.

Although most tax-exempt nonprofits are required to file 990 returns with the IRS annually, organizations that bring in under $50,000 per year can file a 990-N, an “electronic postcard” listing just the group’s basic information and affirming its gross receipts have not exceeded $50,000, to satisfy IRS requirements. Integrity has done that for 2016 and 2017.

The internal audit, which was ordered by the board as part of the administrative transition and done by Clarkson, the treasurer, and Horner, vice president of national affairs, was completed on Oct. 13 and made available to chapters by request. A draft copy of the conclusion provided to ENS said that “no discernible irregularities were discovered” and listed bank transactions for 2019 to date, all of which were for typical administrative expenses and disbursements to local chapters. Clarkson told ENS that Integrity has about $53,000 on hand as of Oct. 17.

“I think one of the things that most people aren’t aware of – Integrity has no building,” Clarkson told ENS. “Integrity basically was a box of documents that were sent to me and had to be reorganized. … Part of the issue that occurred is that Integrity’s infrastructure, like its website, is ancient.”

Along with the new website, Integrity announced that it is taking a census to figure out exactly how many active chapters and members it has, and that it will be distributing grants of up to $3,000 to censused chapters. Clarkson said that money comes from a bequest from an estate of just over $30,000.

Smith Riggle said changes will be made to the payment system this week so that members paying dues will receive an automatic confirmation. The board is meeting by conference call every two weeks, Smith Riggle said, and further financial information will be posted on the new website.

Clarkson said he has dedicated his time to Integrity because he believes it is still needed – particularly for transgender people, and in more conservative areas of the country – and he wants to help local chapters succeed.

“The most effective thing that Integrity can do is support its chapters, because they’re really the ones who do the work.”

Reaction to Integrity’s recent statement has been mixed, with some calling it too little, too late, and some grateful for the update but confused about what Integrity’s purpose will be going forward.

The Rev. Susan Russell, president of Integrity from 2003 to 2009, told ENS she’s disappointed at the state Integrity is in now.

“Where there’s no vision, people wallow around and make decisions,” Russell said. “I think that what we’re seeing right now is sort of the last gasp of an organization that has outlived its legacy.”

Russell says she cares deeply about Integrity and wants to see it succeed, but the board has a lot of “deferred maintenance” to do.

“I’m hopeful that something could come out of this. But in order for that to happen, there has to be some healthy leadership and there’s got to be some transparency.”